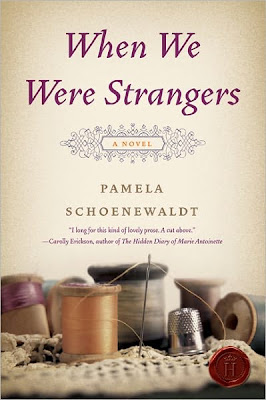 When We Were Strangers by Pamela Schoenewaldt is a novel that just grabs you by your heart and soul as you read it. II will say right off before I go any further that I absolutely loved this novel! This is the author’s debut novel and I can’t say enough about her beautiful writing and story telling ability. When We Were Strangers is a novel that is going to remain in my thoughts and heart for a long time to come – it is the incredibly moving, heartwrenching and yet hopeful story of one very determined young woman to survive and succeed in a time when many women couldn’t.

It is the 1800’s and Irma Vitale is living in the small village of Opi, located near Naples. Her family farms sheep and know all about what being poor and hungry really is. Irma is a very plain girl – 16 years old at the opening of the novel. Her mother is dying and the one thing she leaves her daughter with is telling her that to leave their village dooms her to die among strangers. However as the next few years pass Irma finds it increasingly impossible to stay and live with her father even though the idea of leaving her Aunt Zia terrifies her. Her brother Carlo left for America shortly after their mother passed but Irma didn’t go then – now she feels she has no choice.

Irma’s only hope in her own village would have been to marry but aside from the fact that there aren’t any eligible men, Irma is also very plain. This is particularly important because to be plain didn’t open a lot of avenues to women back then. So Irma books passage on the ship Servia with only a small dowry but much talent in the area of sewing and this is what she intends to succeed at in America.

Although Irma is plain, she has a special quality that seems to draw people because she does seem to meet friends wherever she goes. On the ship she makes acquaintance with some interesting people and even meets a man who works on the ship that might see beyond her plainness. Upon reaching America, she is befriended by Lulu – a cook in the workhouse and later by Molly – a maid. Irma and Molly’s friendship is one that stands the test of time and I could see them friends way past the ending of the book.

One of the most important relationships is the one she makes with the healer Sofia. I won’t say how or why they met but meeting Sofia shapes the rest of Irma’s life and sends her on a path that she would never have thought to take. This one meeting and this one woman who so strongly believed in Irma changes all avenues of her life. I loved the relationship between these two; it was part mother, part teacher, part friend. It was amazing.

I loved the character of Irma. Upon coming to America, she became a victim in a couple of instances, but instead of buckling and giving up, she kept going. I think this novel realistically shows how tough it is for women, really anyone, who immigrated to America back in the 1800’s. Many couldn’t speak any English and they were looked down upon and not treated very well much of the time. I think it shows so much courage for all those people who immigrated in search of a better life – they all amaze me.

Again, I have to say what a beautiful novel When We Were Strangers by Pamela Schoenewaldt is. Her descriptions of the culture, food and areas that Irma lives in are all so vivid that I felt I was right there with Irma every step of the way. I’ll tell you – I had a galley copy of this novel and every second page was quite faded out so it was hard to read but the thing was after even the first 20 pages I couldn’t put it down. That is the mark of a really good author – when they can capture your interest so quickly and not let it go no matter what. This will be one of the books that makes my favorites of 2011!

I read When We Were Strangers by Pamela Schoenewaldt for her book tour with TLC Book Tours. You can check out other tour stops for this wonderful book here. You can also visit Pamela’s website to learn more about her and her book and check out her blog as well. When We Were Strangers by Pamela Schoenewaldt released January 25, 2011 and you can buy your own copy here in the US and here in Canada.

My copy of When We Were Strangers by Pamela Schoenewaldt was provided for review by TLC Book Tours and the publisher.