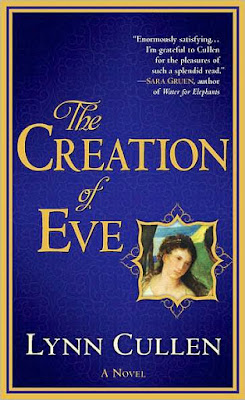 History has always fascinated me, maybe because I was lucky enough to have had a dad who took us to historical sites for vacations when I was a kid. I was able to do things like look out the windows of Abraham Lincoln’s boyhood one-room cabin, or work the handle of the pump that made Helen Keller understand the word, “water,” so I’ve always thought of history in terms of people, not dates, battles, or politics. I’m stunned when people say that history is boring. Because from what I’ve seen, history is one eye-popping, jaw-dropping soap opera.

Take, for example, the characters in THE CREATION OF EVE. Sure, Sophonisba Anguissola is a worthy character in history. She was the first female painter to become famous during the Renaissance, and invented a type of painting that we take for granted today—the depiction of everyday scenes, what is called genre painting. Here is one of her most famous works, The Chess Game (1555). 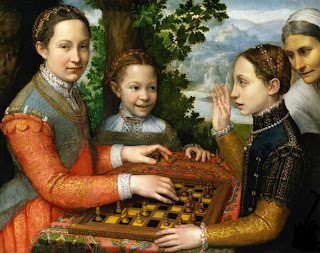 Before Sofonisba, there was no genre painting. Any artist worth his salt would have thought painting scenes from home life to be a waste of time. But being a woman, Sofonisba was forced to paint scenes from daily life, and to use her sisters and servants as models. She didn’t have access to artists’ models, especially if they were, heaven forbid, nude. She was only permitted to paint faces and hands, so she took this limitation and ran with it. She became the best portraitist in Italy, even attracting the attention of Michelangelo, the reigning king in the world of art, and soon secured her place in history.

But as admirable as are Sofonisba’s achievements, it’s what happened behind the scenes that interests me.

For example, once Sofonisba had become famous in Italy, the King of Spain, Philip II, asked her to come teach his teenaged bride to paint. Sofonisba agreed, which meant she had to give up her hard-earned status as a painter. She had to go from being successful in her own right, to being a lady-in-waiting to a not-quite-fifteen-year-old Queen. As such, she was not even allowed to sign any works that she painted while at court. Why would she take such a cut in status?

Written sources suggest that she broke a betrothal in order to go to Spain. I wondered if this broken engagement is what made Sofonisba flee Italy for the Spanish court. I thought, what if her suitor was a student in Michelangelo’s workshop? What if something improper happened between them, and he rejected her, and she fled to save her reputation—because in Renaissance Italy, a woman’s reputation was worth more than life.

History provided me with just such a character for her to have fallen in love with: Tiberio Calcagni. He was a fellow student in Michelangelo’s workshop when Sofonisba studied there. He was her age. A talented sculptor and architect, he was one of Michelangelo’s favorite disciples, and numbered among the handful of friends at Michelangelo’s side when he died. Michelangelo even gave Tiberio a sculpture to finish, a pietà. Composed of three figures, it was considered a bold and impossible work. Nobody had sculpted three figures from one block of marble before. 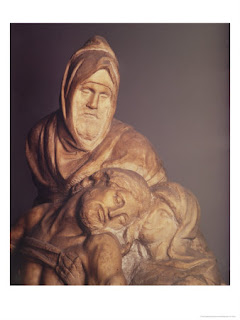 I wrote the opening scene of THE CREATION OF EVE around Tiberio showing Sofonisba this sculpture. Hint: she should have never gone up to his studio unattended. And as I got to know the people in Sofonisba’s world, the story only got juicer.

I found that the Spanish King, Felipe, (Philip II) fell madly in love with his wife who was nearly twenty years his junior. Meanwhile, his illegitimate half-brother, Don Juan of Austria, was brought to court. Don Juan, close to the Queen’s age, was everything his brother was not: charismatic, handsome, dashing, and young. The Queen spent much of her time at court with her swoon-worthy brother-in-law, as well as with the King’s son, Don Carlos, who was her age, also. There was much talk about the King’s son being in love with the Queen—Don Carlos repeatedly gave her gems more appropriate for a future wife. An opera by Schiller, Don Carlos, has been written about their love affair. But I couldn’t help but think that the beautiful and vivacious Elisabeth would have been more likely to have had eyes for her charming brother-in-law than for the King’s son. Don Carlos was sickly, a tad feeble-minded, and erratic, and though records show that he was treated kindly by young Elisabeth, surely it was more out of pity than passion. If you had a choice, who would you choose: 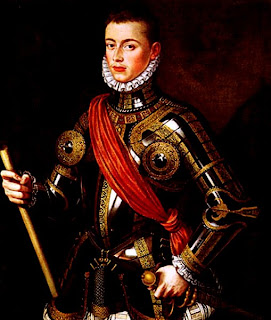 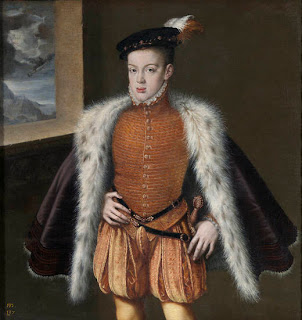 And then when I read that the King and Don Juan had a terrible argument over Elisabeth at her funeral, the deal was sealed. I felt certain that the King was jealous of his half-brother’s relationship with the Queen. What a stew of yearning the Spanish court must have been when Elisabeth was queen!

And to think all we usually associate with Philip II is the boring Spanish Armada!

As you see, history is so much more than dry facts. It’s the story of how people throughout time have grappled with the emotions and challenges that make us human. I hope you’ll join me in delving into the past in THE CREATION OF EVE, and because of it, will be rewarded with a greater understanding of the human condition.
__________

Thank you so much for this fantastic guest post Lynn! I really enjoyed Peeking Between the Pages of History!
__________

A lush and compelling tale of royal intrigue and artistic longing, set in the sixteenth–century Spanish court.

The Creation of Eve is based on the true but little-known story of Sofonisba Anguissola, the first renowned female portraitist of the Renaissance. After a scandal in Michelangelo’s workshop, Sofonisba flees Italy and joins the Spanish court of King Felipe II to be a lady-in-waiting to his young bride. Sofonisba befriends the queen, only to become embroiled in a love triangle involving the queen, the king, and the king’s illegitimate half brother, Don Juan. The Creation of Eve combines art, romance, and history from the golden age in Spain in a story that asks the question: Can you ever truly know another person’s heart?

I have one paperback copy of The Creation of Eve by Lynn Cullen to share with one of my lucky readers. To enter…

This giveaway is open to US & Canadian residents only (no PO boxes) and I will draw for the winner on Saturday, March 12, 2011. Good luck to you all!