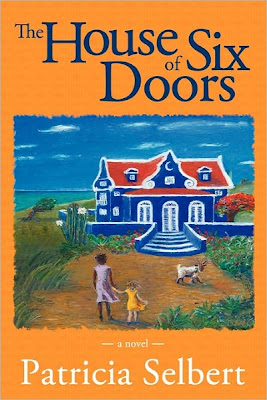 The main inspiration for The House of Six Doors was my mother who was emotionally unstable.

Living with her was somewhat like the Chinese curse “May you live in interesting times.” Although it was disturbing to live with the real mama, it was also very rich, especially as writing material.

The real Mama was dramatic and overbearing in both her manic and depressed states. During my younger years, I was horrified I had her as a mother. But once I left home and the drama subsided I was able to get some perspective and a sense of myself.

It took many years to find my voice. At first my writing served as a reflection, then slowly my writing took on a life of it’s own. I found inspiration in everything around me. I learned to live by the metaphor in the novel, “three doors to let in wisdom, compassion and gratitude and three doors to let out ignorance, anger and greed.”

Curaçao, the island I am from, was the second main inspiration for The House of Six Doors. Contrasting Curacao to Hollywood in the 70’s was too good to pass up, it was so extreme.
__________

Thank you so much for this guest post Patricia! I always love to hear what the inspiration or meaning is for someone behind their writing.
__________

Thirteen-year-old Serena is torn from everything that’s familiar on her island home. “Everything will be better in America,” her mother tells her. They arrive in the US to find nothing as they expected. Speaking fluent Dutch, Spanish, and Papiamentu (the coloquial language of Curaçao), but limited English, Serena learns to pretend that everything’s fine while struggling to live up to her mother’s impossibly high expectations; always afraid to send her mother into another downward spiral of depression. She juggles responsibility for her mother’s well-being with school, a secret boyfriend, and a growing desire for independence, in a foreign land: Hollywood.

The wisdom of her grandmother, a mixed-race mystic, gives her solace, which she clings to tenaciously despite the thousands of miles between them. Coming of age in a foreign land, faced with enormous obstacles, Serena finds her own feet and the acceptance that sets her free.

PATRICIA SELBERT was raised on the Dutch Caribbean island of Curaçao, speaking four languages. She immigrated to California at age 13, later representing the Netherlands Antilles in equestrian events at the World Championships and the Pan American Games.

Her work has been published in numerous newspapers and magazines. Currently, she’s promoting her novel, The House of Six Doors, which launches on February 1, 2011. She lives in Santa Barbara, California, with her husband, two sons, and three dogs.

To find out more about Patricia Selbert you can find her at her website and her personal blog!
__________

I have one copy of The House of Six Doors by Patricia Selbert up for grabs courtesy of the publisher. To enter…

This giveaway is open to US residents only (no PO boxes) and I will draw for the winner on Saturday, March 19, 2011. Good luck everyone!