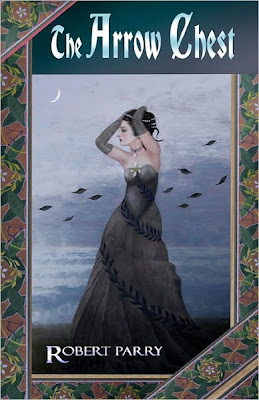 Please join me in welcoming Robert Parry, author of The Arrow Chest, here to Peeking Between the Pages today. I reviewed The Arrow Chest yesterday (my review) and really enjoyed it for it’s ghostly and dark elements along with the historical fiction aspect which I always love. Today Robert Parry joins us to talk about when his interest in Tudor history began and why…

The title ‘The Arrow Chest’ refers to one of the most peculiar incidents in English history. After her execution in 1556, the body and head of the second of Henry VIII ‘s wives, Anne Boleyn, was placed inside an old arrow chest and buried, unmarked and without ceremony, beneath the floor of the Chapel in the Tower of London. The chest itself was large enough for the purpose – made of elm wood, and long enough to accommodate bow staves as well as arrows – but hardly a dignified burial. What a terrible conclusion to a glittering life! What a dreadful way to treat an anointed Queen and someone who, after all, had been instrumental in the Reformation of the Church of England!

For quite some time now I have wanted to write about this most enigmatic, mysterious and unjustly maligned of women. I wanted to try to get beneath the surface of what the history books and the movies tell us and try to fathom what might really have taken place in the relationship with King Henry. What was the chemistry, the dynamics that existed, and why after almost a decade of steadfast courtship did he abandon her and come to loathe her in so short a space of time? I also wanted to include within the story the character of Thomas Wyatt, a handsome and clever courtier, poet and musician (who might well have been Anne’s childhood sweetheart, and was certainly viewed by Henry as a rival for her affections in later life). Thomas makes the third corner of a very special love triangle in fact.

It became pretty clear, however, early on in the process of sketching the plot that this couldn’t be just another Tudor love story. I wanted, instead, to try and make sense of the characters by moving the whole thing forward in time, to a place just a little closer to home and to the wonderful, extravagant and exciting era known as Victorian Gothic. Not so bizarre as it sounds, this change of scenery to 19th century England. The Victorians underwent their own crisis in faith – the advent of Darwinian evolution that threatened the Church and its teachings – just as the Reformation once threatened the established Church way back in the 16th century. In Victorian England, moreover, there were always plenty of powerful men at large – leaders of industry and ‘kings’ in their own right. And the Victorian age also gave us the fabulous poets and painters of the Pre-Raphaelite movement. It seemed, therefore, the perfect environment in which to speculate on just what might have taken place between Anne Boleyn, Henry and Tom Wyatt.

The significance of the Arrow Chest, meanwhile, becomes a little more clear when we appreciate its symbolic importance in Tudor times. Much of the poetry of Thomas Wyatt alludes to Cupid and his love-arrows. The ‘chase’ – the hunt and the hunted – these were all metaphors for courtship and sexual desire. Meanwhile, in one of his love-letters to Anne, Henry describes himself as being struck by cupid’s dart. So arrows were important tokens. The King also liked to associate himself with the archer-God Apollo. At the time of Anne’s coronation in 1533, the artist Hans Holbein was commissioned to produce a tableau for the procession in which Henry was depicted as Apollo, seated on a dais surrounded by the Muses.

So there you have it. It is a Tudor story – only moved forward a few centuries in time. The novel opens in London, in 1876, the year in which the skeletal remains of Anne Boleyn first came to light during a renovation of the Chapel of St Peters ad Vincula in the Tower of London.

(Robert Parry is an independent UK writer with special interests in Tudor and Elizabethan history, Victorian Gothic and Pre-Raphaelite art. His debut novel in 2009 was ‘Virgin and the Crab,’ a story about the astronomer John Dee and Elizabeth Tudor. ‘The Arrow Chest’ was published in January of this year.)
__________

Thank you so much for joining us today with this wonderful guest post Robert! Tudor history is my favorite so that was most certainly an intriguing aspect of your novel for me.
__________

London, 1876. The painter Amos Roselli is in love with his life-long friend and model, the beautiful Daphne – and she with him – until one day she is discovered by another man, a powerful and wealthy industrialist. What will happen when Daphne realises she has sacrificed her happiness to a loveless marriage? What will happen when the artist realises he has lost his most cherished source of inspiration? And how will they negotiate the ever-increasing frequency of strange and bizarre events that seem to be driving them inexorably towards self-destruction. Here, amid the extravagant Neo-Gothic culture of Victorian England, the iconic poem ‘The Lady of Shalott’ blends with mysterious and ghostly glimpses of Tudor history. Romantic, atmospheric and deeply dark.

Check out the book trailer… 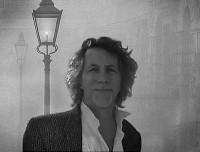 Robert Parry is an independent UK writer of historical fiction with special interests in Tudor and Elizabethan history, Victorian Gothic and Pre-Raphaelite art.

Be sure to visit Robert Parry’s website as well!

I have 1 copy of The Arrow Chest by Robert Parry to share with my readers courtesy of the author. To enter…

This giveaway is open to US & Canadian residents as well as those in the UK and Europe (no PO boxes) and I will draw for the winner on Saturday, March 5, 2011. Good luck everyone!