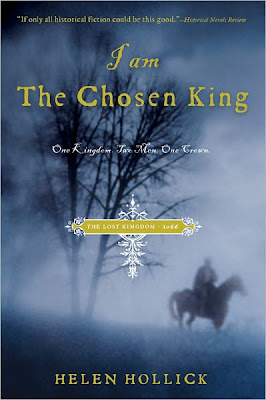 Helen Hollick once again seamlessly weaves fact with fiction in I Am The Chosen King. This novel is again one of the reasons Helen Hollick is one of my favorite authors. Helen has the ability to take us on a journey into another time and place through her words. I Am The Chosen King is a novel about the last English King – Harold Godwinessson. This is an area I was not well versed in and I was completely captivated by this story – not only did I get to learn something but I read a thoroughly enjoyable novel along the way. Helen brought all the characters from a time so long ago to life for me and through that I was able to live in their world for a while.

The year is 1043 and Edward has become King much to his mother Emma’s dismay. From a young boy Edward was much more interested in the church than in becoming a King and that didn’t change over time. He was a weak man who could be easily led by others more domineering than he was. The one saving grace though was that he was loved by the people. He was not however loved by his mother and he wasted no time pretending any affection for her either.

In the meantime we have Harold Godwinesson who is a young man, an Earl. Inspecting his lands he happens to meet a young beautiful girl named Edyth and later, after she takes care of him during an illness, he realizes he loves her and takes her as his hand-fast wife. This was not a marriage in the eyes of the church though; at some point Harold would have to take a true wife. However, their love story had to be one of my favorite parts of this novel. In a time when men took young girls as wives in order to form alliances between countries and treated them like objects, not people, theirs was a true love and it was nice to read of a man who treated a woman with respect.

As the years go forward Edward is pretty much forced to take a wife. As King he needs an heir. He marries Harold’s sister Edith but they do not have children; Edward has no interest in women. A big part of his animosity towards women came from his mother Emma who was very domineering and powerful in her own right. Much happens throughout this time in history but perhaps one of the biggest was that ultimately as time wore on Harold was the one who was running things for Edward and this was no secret.

When Edward passes, Harold is voted in as King by the council partly due to Edward wishing it but also because of his ability to lead. William, the Duke of Normandy was not going to take lightly not even being considered for the Crown of England after Edward passes. He is furious as he believed that he and Harold had an agreement – Harold was going to push for him to become King. However Harold only agreed to this to save his own life and that of his men. Ultimately this leads to The Battle of Hastings in 1066 which brings us to the end of Harold’s reign and the beginning of William’s.

In many historical novels I find that I don’t form bonds with many of the characters. Not so with Helen’s portrayal of people – even those I disliked I felt passionate about. My favorite character by far was Harold. He is described as being a handsome man, kind, caring and respectful. If I had been a young maid I probably would have fallen for him as well. His hand-fast wife Edyth was another character I adored. She was so loving and understanding towards all that Harold’s life entailed.

There is absolutely no way to encompass in a review all that happens in I Am The Chosen King. The writing is beautiful and descriptive as I’ve come to expect from Helen’s novels. There is never a dull moment whether you’re at court and bearing witness to the betrayals and backstabbing there or off in the heat of the moment on the battlefield. One thing for certain, reading a historical novel by Helen Hollick will leave you feeling satisfied if a little sad that the novel has ended. Even though you basically know the ending before you start the novel, it is in the telling of the story in between that will captivate you and keep you reading.

You can purchase your own copy of I Am The Chosen King by Helen Hollick here in the US and here in Canada. Pop in and visit Helen Hollick’s website to learn more about her and all of her other novels. Be sure to check back tomorrow as Helen will be visiting Peeking Between the Pages and sharing a guest post with us!

My copy of I Am The Chosen King by Helen Hollick was received for review from Sourcebooks.