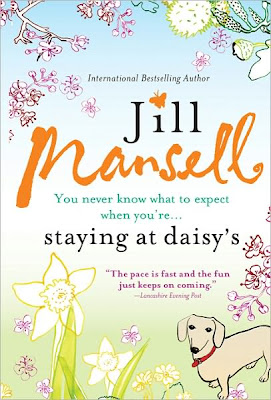 Staying at Daisy’s by Jill Mansell was such a fun romp with a pile of funny and eccentric characters! Jill Mansell is fast becoming a favorite author of mine and reading her books is always a delight! This is one romantic comedy that will have you flipping those pages to see what comes next – it’s funny and yet has that little bit of a serious tinge to it as well!

Daisy is the manager of a beautiful country hotel called Colworth Manor which is owned by her father Hector. Since losing her husband Steven in a car accident with non other than his mistress Daisy has sworn off men, especially the good looking ones who can charm your pants off. They are never anything but trouble.

So, when at a wedding being hosted at her hotel, she happens to meet the more than obnoxious Dev while defending her best friend Tara, she is more than determined to steer clear of him – he is much too handsome and sexy for his own good and hers. Even worse he is sticking up for his lousy mate Dominic who is getting married there and who just happened to make a play for chambermaid Tara. Now Tara does know him though, he used to be an ex-boyfriend of hers. Still when she’s caught with Dominic by the bride’s sister, she’s deeply offended that she’s being blamed for the whole sodden mess!

Dev doesn’t give up so easily though and keeps showing up and getting on Daisy’s nerves. Yet when he takes her to help him buy a dog, she can’t help but see another side to him. She picks out Clarissa for him even though he specifically said he wanted a big and burly dog much like himself. Yet, he does end up going home with Clarissa and of course falls in love with her. Later he shows up again at Daisy’s hotel booking in for a few weeks while his place is being renovated because of a water leak. While Daisy is currently seeing her ex-boyfriend Josh, she still can’t help but feel butterflies whenever Dev is around. Well, she’ll just have to make more of an effort to avoid him, won’t she? It’s just that maybe that isn’t really what she wants or is it?

Staying at Daisy’s is full of quirky characters. I’ve barely skimmed the surface. While Daisy and the dog Clarissa were my favorite characters, Tara was hilarious. She’s so unlucky in love and every step she takes in any direction just seems to end in more laughs. Daisy’s father Hector is someone who is larger than life and thrives on it – he’s also having an affair with a village local while pretending to himself that it means nothing. There is also Tara’s aunt Maggie who was fantastic – when she has problems with her washing machine, she takes her anger to a whole new level. Then there’s Barney who has to be the world’s last sweetest guy – you just want to give him a big ole hug!

Nothing really earth shattering happens in this novel yet you will never find a boring moment. It’s all about people finding love and living their lives and you will find yourself completely captivated by the cast of characters and the beautiful country manor and area. I felt like I knew all of these people and cared about them before I was even a quarter of a way into the novel and I’ve found that with all of Jill Mansell’s books that I’ve read. She has a knack for making you feel a part of her character’s lives as well as letting you sit back and imagine that you’re enjoying yourself in the English countryside. As the story evolves Daisy is faced with the biggest surprise of all and yet it is this that gives her the push to finally take the biggest risk of all and open herself up to love again.

If you’re in the mood for a fun and fabulous read, then I’d say Staying at Daisy’s would be a great pick as would most of Jill Mansell’s books. If you enjoy British authors as I do and all their funny and quirky sayings, then you’ll love this reading this story. You can pick up your very own copy of Staying at Daisy’s by Jill Mansell here in the US and here in Canada. Be sure to pop into Jill Mansell’s website and check out all of her books!

My copy of Staying at Daisy’s by Jill Mansell was received for review from Sourcebooks.