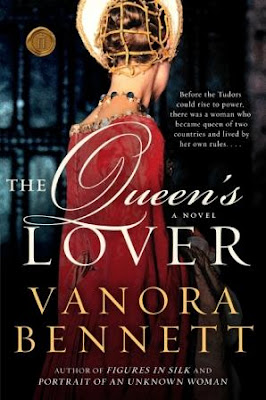 The Queen’s Lover by Vanora Bennett is a novel that weaves fact with fiction in its portrayal of Catherine de Valois, mother to Henry VI. Set in fifteenth century England, it is full of all the political intrigue, betrayals, war, love and lust that you come to expect from this time period. The Queen’s Lover follows Catherine de Valois through her lonely childhood right up to the point of the coronation of her son.

Catherine’s childhood as Princess of France was definitely not the one you’d think she’d have- the French are in turmoil and while her father is quite mad, her mother is neglectful. There are no balls and children being lavished upon; Catherine and her brother Charles spend their days hungry and with only each other as company. If not for Christine de Pizan who watched over them, they likely would not have had any happiness as children. The one bright spot in her childhood was when she meets Owain Tudor and this meeting sets forth a lifetime of struggles for the two of them in terms of their feelings for one another.

Catherine just wants a way out so when the opportunity presents itself to marry the English King Henry V, she stops at nothing to do just that. With her mother, Queen Isabeau’s help, Catherine finally marries Henry V and after accompanying him in a few battles is brought to England. It’s nothing she imagined it to be and she is having difficulty with the language; even more so when people refuse to speak to her in anything but English. Henry is often distant, much more interested in fighting wars than a young bride at home. Though disappointed, Catherine puts it all down to the way of the English. Luckily Catherine does manage to get pregnant and produce a son and heir but even that doesn’t give her the recognition she wants as all to soon she loses Henry V to illness.

After Henry’s death, little Harry is left as King. As of yet, he is still much too young to take this role on but while Catherine just wants him to have a peaceful childhood, others want him to learn the ways of war at a young age to be prepared. Most disturbing at this point to me was the treatment of the little King mostly by Warwick. He endured beatings and emotional battering from him and I’m amazed that anyone allowed him to do this to a young King. My thoughts are they felt this is what made a man but it doesn’t – maybe this is why some of the Kings went mad. How hard it was for Catherine to stand by and watch this. You may think that you wouldn’t let it go on but women weren’t given any choices in this time period. If she had raised a fuss, Harry could just as easily been taken away from her completely.

I really liked this portrayal of Catherine de Valois. You really get a sense for how hard it was for women as we journey through her life. They simply had no say about anything – they were just supposed to do what they were told. Catherine thankfully had Owain who stood by her after Henry V died and guided her. He desperately fought against his attraction and love for Catherine but true love finally won out. At a time when it was strictly forbidden for royal blood to mix with the commoner, Catherine and Owain remained together and went on to have a family of their own. I enjoyed how their love story was portrayed and liked that Owain always, no matter what, looked for ways in which he could make things easier for Catherine.

While I did enjoy The Queen’s Lover by Vanora Bennett I do have to say that I found some parts just too drawn out for me and that hampered my enjoyment some. My favorite parts were when Catherine’s mother Queen Isabeau would throw her temper around. I could almost visualize this woman as she stood up to Warwick in an all out attempt to protect her daughter. As well I liked how Catherine never quit. Despite having little say in how her life would go or her son’s, she still battled forward and took any opportunity awarded her to change things for herself and Harry. This is good and solid historical fiction novel for all those who love a good saga to sink their teeth into!

My copy of The Queen’s Lover by Vanora Bennett was received for review from TLC Book Tours and the publisher.