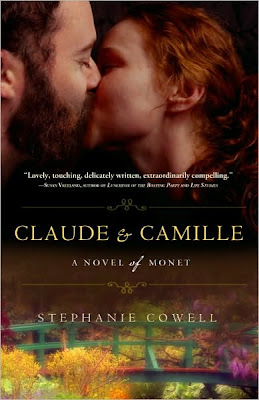 I’m thrilled to welcome back Stephanie Cowell, author of Claude & Camille releasing in paperback on April 5, 2011, back to Peeking Between the Pages. I reviewed Claude & Camille last year (my review) and I adored it! It’s a fantastic novel that made my favorites list of 2010! Stephanie is joining us to share The magical story of how my first novel was published…

I pretty much sold my first novel to a major publisher at a church supper. Well, there’s a lot more to the story than that, but that was the door through which my novel found its way in bookstores across the country and in Europe.

In my early 40s I turned from singing to writing, my first love, and was determined to write a novel from my heart which someone would publish. I thought it would take a year. I wrote a draft of my first book and got turned down by a major agent who said I didn’t write well enough. I felt this was what I was supposed to do and immediately set about revising and began to pass around my drafts in a brown manuscript box to any and all friends who would read it. I joined a writers’ support group of the most amazing women. And of course I prayed a lot.

My sons were supportive of my writing because opera singing had been too noisy. I wrote first on a typewriter, then the office computer, and finally my own laptop. I wrote mornings and evenings around my office job. And more and more friends kept reading, and my support group sent me cards and books and one day, a piece of yellow legal paper with the words on it in big script, “Keep writing.” By that time I had been writing for five years and had completed nearly four novels.

A convent of nuns I loved prayed for me and the great writer Madeleine L’Engle became my supporter. She even tried to get her publisher to take a novel, and it was an almost. I was the closest and most frequent “almost” I knew. Madeleine and the sisters said, “Keep writing.” By that time I had been writing six years.

I did keep writing and passing my manuscript around during church coffee hour (even the priest read it!) Then one night I was leaving that church supper, when two older women who had loved one of my books especially hurried up to me and said, “We sat opposite the office manager for W.W. Norton and told him about you.” And he came down the steps and said, “I’d like to show your book to my favorite editor.”

A month later I had a two-book contract with W.W. Norton. Everybody took me out to celebrate but I was too nervous to eat. It was all quite magical: I got wonderful national reviews and my picture in People Magazine. My writers’ support group had t-shirts printed with the book jacket cover on them. Madeleine sent me flowers. The magic began then and hasn’t ceased. It is not always a dream (no work is), but the dream parts are amazing.

My advice to all struggling writers is: share your book with everyone. Listen to what people say in response; if three people say the same thing, listen seriously. No one can tell the stories you have to tell in the way you are given to tell them. Keep writing.
__________

As a note, this guest post was first published on my blog on April 14, 2010 and re-posted with Stephanie’s permission. This post is as wonderful to me today as it was then. Thank you Stephanie!
__________

About the Book (from Fantastic Fiction)

Sometimes he dreamt he held her; that he would turn in bed and she would be there. But she was gone and he was old. Nearly seventy. Only cool paint met his fingers. ‘Ma très chère . . .’ Darkness started to fall, dimming the paintings. He felt the crumpled letter in his pocket. ‘I loved you so,’ he said. ‘I never would have had it turn out as it did. You were with all of us when we began, you gave us courage. These gardens at Giverny are for you but I’m old and you’re forever young and will never see them. . . .’

In the mid-nineteenth century, a young man named Claude Monet decided that he would rather endure a difficult life painting landscapes than take over his father’s nautical supplies business in a French seaside town. Against his father’s will, and with nothing but a dream and an insatiable urge to create a new style of art that repudiated the Classical Realism of the time, he set off for Paris.

But once there he is confronted with obstacles: an art world that refused to validate his style, extreme poverty, and a war that led him away from his home and friends. But there were bright spots as well: his deep, enduring friendships with men named Renoir, Cézanne, Pissarro, Manet – a group that together would come to be known as the Impressionists, and that supported each other through the difficult years. But even more illuminating was his lifelong love, Camille Doncieux, a beautiful, upper-class Parisian girl who threw away her privileged life to be by the side of the defiant painter and embrace the lively Bohemian life of their time.

His muse, his best friend, his passionate lover, and the mother to his two children, Camille stayed with Monet – and believed in his work – even as they lived in wretched rooms, were sometimes kicked out of those, and often suffered the indignities of destitution. She comforted him during his frequent emotional torments, even when he would leave her for long periods to go off on his own to paint in the countryside.

But Camille had her own demons – secrets that Monet could never penetrate, including one that when eventually revealed would pain him so deeply that he would never fully recover from its impact. For though Camille never once stopped loving the painter with her entire being, she was not immune to the loneliness that often came with being his partner.

A vividly-rendered portrait of both the rise of Impressionism and of the artist at the center of the movement, Claude and Camille is above all a love story of the highest romantic order.

I was born in New York City to a family of artists and fell in love with Mozart, Shakespeare and historical fiction at an early age. I began printing stories in a black and white school notebook at about nine years old and in my teens wrote several short novels which remain in a dark box. I learned something though, because by twenty, I had twice won prizes in a national story contest.

Then I left writing for classical singing. I sang in many operas and appeared as an international balladeer; I formed a singing ensemble, a chamber opera company, and so on. The translation of a late Mozart opera returned me to writing once more and I now mostly sing while washing the dishes!

My first published novel was NICHOLAS COOKE: ACTOR, SOLDIER, PHYSICIAN, PRIEST, followed by two other Elizabethan-17th century novels: THE PHYSICIAN OF LONDON (American Book Award 1996) and THE PLAYERS: A NOVEL OF THE YOUNG SHAKESPEARE. In 2004, I returned to my musical background and wrote MARRYING MOZART; it has been translated into seven languages and optioned for a movie.

I am married to poet and reiki practitioner Russell Clay and have two grown sons (one in computer systems design and one a filmmaker). I was born in New York City and am still living here, a short walk away from all the impressionist paintings at the Metropolitan Museum.

I have 5 copies of Claude & Camille by Stephanie Cowell to share with my readers courtesy of the publisher – isn’t that fantastic! To enter…

This giveaway is open to US & Canadian residents only (no PO boxes) and I will be drawing for the winners on April 16, 2011. Good luck everyone! Winners will be in for a great read!