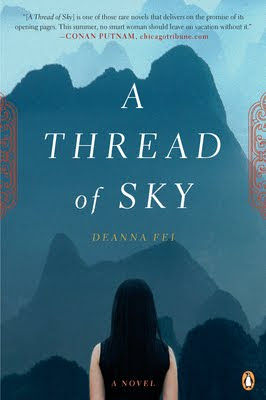 A Thread of Sky by Deanna Fei is a portrayal of a family who has very much drifted apart. Irene’s husband of thirty years was leaving her and she couldn’t resist telling him good riddance on his way out the door. Later she learns that he has been killed in a tragic accident. She is unable to function thinking that it is her fault and she can feel her three daughters Nora, Kay, and Sophie blaming her as well.

On New Years Irene is alone wishing she had her daughters with her. Her sister Susan calls to wish her a Happy New Year and this starts Irene thinking on how their mother’s eightieth birthday is coming up and they should recognize it in some way. Irene decides a reunion is just what they need – three generations of women together. Irene and Susan have never been close with their mother for many reasons and Irene seems to have her own set of issues with her girls even though she doted on them when they were growing up. Just maybe this trip to China is what they all need in order to mend relationships and realize how important family truly is.

Irene manages to convince her girls to take this trip although it isn’t easy. She makes all the plans and they set off, meeting her sister in Hong Kong. As the trip progresses, the story unfolds. The narrative goes between all the women as they take a deeper look into themselves. Irene, Susan and Ma especially have interesting backgrounds having come from China when it was in turmoil as well as Ma having been a feminist revolutionary during the Chinese Civil War. The girls stories are interesting as well though as we learn how each of them has gotten to where they are now. For young women they all have some pretty big issues and you have to wonder how they got to the point they’re at. It was interesting to see how the conflicts between the three generations of women came about as well.

I liked the characters in this novel and their interactions with each other were intriguing. They were so disconnected from each other and Irene was trying so hard to bring them all together as a family again. My favorites were the young women though. Nora who was very successful on Wall Street has so many issues with trust, Kay who has spent the year in China and seems so adrift not really knowing what she wants, and then there’s Sophie who’s grief is manifesting in an eating disorder. They were complex characters and I felt closest to them and the parts narrated by them were my favorite of the story. One thing this trip does for them all is change their lives. They each come away from it with different views than they had going in and hope for a better future.

I did enjoy this novel, particularly the last half when it centered more on the personal lives of the women. The author’s writing is very descriptive and wonderful. I enjoyed the descriptions of the food and I felt, through the author’s vivid imagery, that I was on a trip through China myself. I think for anyone who enjoys a novel that takes you away to another place while portraying complex family relationships, this book would be one you would enjoy. It would really make a great book club selection as well as their are so many different discussion topics in it like marriage, fidelity, family issues, and even eating disorders.

My copy of A Thread of Sky by Deanna Fei was received for review from TLC Book Tours and the publisher.