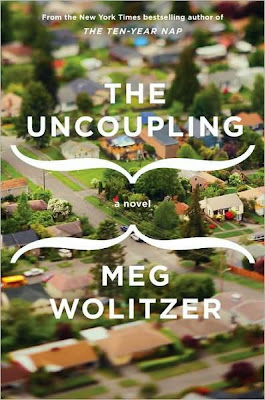 The Uncoupling by Meg Wolitzer is definitely a novel that has one of the most intriguing story lines I’ve encountered in a long time. This novel takes a look at the women of Stellar Plains and their loss of interest in sex which seems to happen quite suddenly. However it really isn’t so sudden – it also seems to coincide with the arrival of the new drama teacher Fran and her choice of Lysistrata for that years high school production. The Lysistrata is a famous Greek comedy in which women withdrew sex from their husbands or significant others in order to stop the war. The women of Stellar Plains though have no idea that the two are in any way related.

My favorite characters were Robby and Dory and their daughter Willa, who much of the story is centered around. Robby and Dory have been married for over twenty years and are still totally in love with each other. They have never had any problems in the bedroom and find sex brings them both comfort and a closeness to each other. They are both English teachers at the local high school and are also very well liked by the students. Their daughter Willa attends the high school as well and her parents main complaint about her is that she doesn’t read as much as they’d like her to. Really though as the novel moves forward Dory learns that she really didn’t know much about her daughter when her focus is more removed from her husband.

As Fran gets the rehearsals going for the play, thus begins the subtle shift in how the women of Stellar Plains are feeling towards their relationships. It takes over the women in a sweeping spell that falls over the town. It doesn’t take everyone all at once; more it seems to go in waves enveloping women as it sees fit. The spell comes over the women as a coldness that makes you want to wrap yourself in a warm blanket. It leaves the women not wanting to be touched at all and thought of sex of any kind was horrifying. When the spell hits Dory she is left freezing and knowing without a doubt that the sexual side of her relationship with Robby is over!

What I found the most intriguing aspect of the novel is the reactions and fallout coming from the men when their women withdraw the sex. In Robby’s case when he realized things weren’t going to go back to normal he withdrew more into himself, started gaining a bit of weight from eating too much, and began to stop doing things around the house that he’d always done previously. Dory explained it perfectly…

‘Sexlessness had awakened some churlishness in him. Was this all it took in order to find a bad side of a man? Was it like depriving him of an essential nutrient?’ (page 115, uncorrected advance copy, final copy may be different)

I’ve always felt that men place a much higher value on sex than women do. As women we place a high value on feeling loved and cherished. Now that’s not to say that sex isn’t as important to a woman; I just don’t think we would get quite as ornery as a man if it were taken away. What is interesting to note is the breakdown of the marriage when an essential element is missing. I’m sure most women at one time or another have thought to themselves that they’d rather not that night but at the same time that intimacy is quite important to the overall workings of a successful marriage.

The beginning of this novel was slow to start for me and I wasn’t even sure I was going to like it. Don’t get me wrong here – the writing is absolutely fantastic! The author has a wonderful way with words and she injects a lot of humor into this story that I liked. Then about halfway through I found myself unable to put the book down and was anxious to get to the end of the story to see what would be the final outcome for this town. Another thing I really liked was that little element of magic that the novel holds. The end was also great – I loved how the author wrapped up all that had happened in Stellar Plains and why. The one complaint I would have is that the book had too many characters for my liking. I would have preferred it focused more on Dory and Robby while still bringing the results on the town into the story but that’s a really minor complaint and I’m sure for other people the amount of characters wouldn’t be an issue. I also have to mention that for a novel about sex that there is actually no sex going on in the graphic sense. There is absolutely nothing offensive in this book that I could find. What this novel really does though is make you sit back and really think about the ‘what if’. What if this happened – how would your spouse or boyfriend react and how would you handle all of a sudden having no desire for your mate. Like I said it’s a really interesting concept to think about and it would be a great book to discuss with book club members.

I have one copy of The Uncoupling by Meg Wolitzer to share with my readers. To enter…

This giveaway is open to US & Canadian residents only (no PO boxes) and I will draw for the winner on Saturday, May 14/11. Good luck everyone!

My copy of The Uncoupling by Meg Wolitzer was received for review from TLC Book Tours and the Publisher.