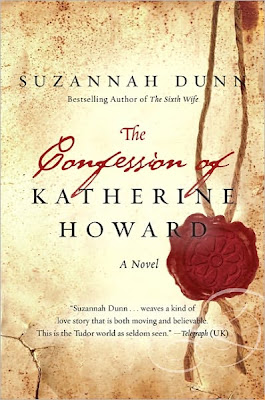 At the young age of twelve, Katherine is sent to live with the Duchess of Norfolk. She comes across as aloof to the other girls yet they all want to befriend her. At first Cat Tilney resists Katherine’s pull but even she succumbs and they become best friends. Cat is horrified at much of Katherine’s behavior because even as a young girl Katherine had a real hankering for the boys. While with the Duchess, Katherine makes her way through a few boys, one being Francis Dereham. She seemed to be quite taken with him but ultimately was called away to King Henry’s court at the age of seventeen. I’m not entirely sure that Katherine ever really loved anyone as much as she loved herself.

In the meantime Cat is left at the Duchess’s and becomes involved with Francis herself. Later on when Katherine is made Queen, Cat is called to court as is Francis. Katherine however has not been idle and certainly not devoted to King Henry. Again Cat is horrified when she learns that Katherine has been carrying on an illicit affair with Thomas Culpeper. Cat warns her that she is going to be found out and that it would mean certain death if she was. Queen’s were supposed to be virgins which Katherine was most definitely not. In a time when Queens seemed to be coming and going, Katherine was really playing with fire.

Ultimately her background is looked into and it is believed she was pre-contracted to Francis Dereham which back in that day was like a marriage contract. Not being a virgin was alone enough reason for her not being worthy of the King but lying to him as well was treason in its highest form. In the meantime Cat, desperate to help Francis who she loves, gives away a few clues as to more of Katherine’s behavior and this is what eventually is the last straw for Katherine. While Katherine does try her best to get herself out of trouble and especially out of being executed, she doesn’t succeed.

Overall I really enjoyed this book. It’s written in a simple and straight forward way that I really liked and it made for easy reading. My biggest complaint about this novel is that I thought, from the title, The Confession of Katherine Howard and even the description of the book, that I would be reading an account from Katherine’s viewpoint. The book is told entirely from Cat’s viewpoint and really I learned just as much about Cat’s life as I did Katherine’s. This did take away from the book for me because really it was just Katherine I wanted to read about, not her friend. That being said though the novel is really good and is a very enjoyable read for those who love historical fiction, especially those who love anything to do with Henry VIII as I do!

I read The Confession of Katherine Howard by Suzannah Dunn for her book tour with TLC Book Tours. You can stop by and see what other readers on the tour thought of the book here. Be sure to pop in and visit Suzannah Dunn’s website as well! You can pick up your own copy here in the US and here in Canada.

My copy of The Confession of Katherine Howard by Suzannah Dunn was received for review from TLC Book Tours and the Publisher.