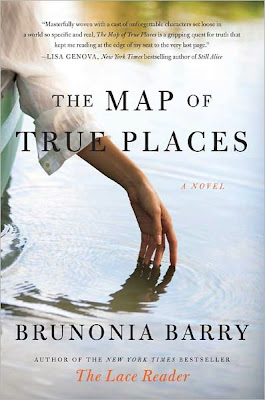 The Map of True Places by Brunonia Barry was another hit for me. I read her first novel The Lace Reader and just loved it so I was anxious to read this one as well. I was not disappointed. Again, Brunonia Barry managed to captivate me from beginning to end with this wonderful novel.

Zee works as a psychiatrist in Boston but she comes from a past full of struggles of her own which makes her an intriguing character right from the beginning of the book. As a young girl her life was deeply affected by her mother who was bipolar and then committed suicide when Zee was a teenager. As a result Zee chose psychiatry as a career, maybe in an attempt to somehow understand her mother. Either way Zee lived an usual childhood as her mother would have severe highs and lows and during those times would talk with Zee in a way that you would with an adult, not a child.

Lilly enters Zee’s life as a patient who presents as a person with debilitating panic attacks. Later she is diagnosed as bipolar. Zee makes a mistake with Lilly in that she lets this case get to her. She doesn’t think it’s because of her mother but really as time goes on she realizes that it is, especially as she crosses many boundaries she shouldn’t with Lilly’s case. As things get more and more erratic with Lilly, so does Zee’s desire to make her well again. When tragedy strikes, it affects Zee in so many ways that she just has to take some time to figure things out and caring for her ailing father comes at the right time as it gives her an excuse to run away.

In the meantime, Zee’s father Finch has Parkinson’s and it is continually getting worse. Zee had been in the dark to just how bad as Finch’s partner Melville had been keeping it from her as they didn’t want her to worry. However, when Finch throws Melville out of the house Zee sees firsthand just how advanced her father’s disease is. She chooses to stay partly because of what happens in her practice, partly because of her breakup with her fiancee, but mainly because she feels the need to care for her father.

Zee was one of those characters who gets under your skin. One of those that you feel yourself caring for and hoping for the best outcome for them. The way she stepped up and cared for her father and tried to do things the way she knew he would want them done really showed you the kind of person she was. One of the things that really affected me was reading about her father’s decline and her feelings on it when she realizes just how bad things are. As an adult with aging parents this really affected me because you can really put yourself in the place of Zee and feel her deep sadness. It’s the mark of a really good author when they can evoke emotions such as this as you are reading.

I really liked this novel for many reasons but I think the biggest was because of the subjects of depression, mental illnesses, Parkinson’s and Alzheimers. This type of stuff has always been of interest to me and the way it was portrayed in the book by showing us the effects all of this has had on Zee was very artfully done and made for a really interesting novel. Again, as in her first novel The Lace Reader, we are treated to the descriptions and goings on in Salem and that was great. I loved how she brought some of her characters like Whitney and May from The Lace Reader into the story as well. All in all, this was a great read for me and I can’t wait to see what Brunonia Barry writes for us next!

My copy of The Map of True Places by Brunonia Barry was received for review from TLC Book Tours and the publisher.