Today I’m spotlighting Daughters of Rome by Kate Quinn which releases today! Kate fast became a favorite author of mine after I read Mistress of Rome last year (my review). I had planned on having my review post today but I’m a bit behind in my reading so it will be later this month but it’s coming and I’m so looking forward to losing myself in its pages. Is this not a fabulous cover – I love it! 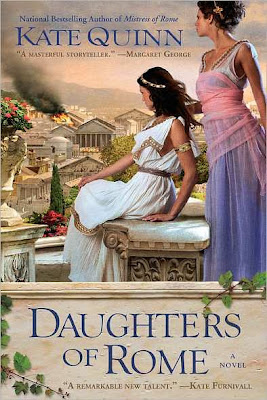 A.D. 69. Nero is dead. The Roman Empire is up for the taking. With bloodshed spilling out of the palace and into the streets of Rome, chaos has become the status quo. The Year of Four Emperors will change everything—especially the lives of two sisters with a very personal stake in the outcome…

Elegant and ambitious, Cornelia embodies the essence of the perfect Roman wife. She lives to one day see her loyal husband as Emperor. Her sister Marcella is more withdrawn, content to witness history rather than make it. Even so, Marcella has her share of distinguished suitors, from a cutthroat contender for the throne to a politician’s son who swears that someday he will be Emperor.

But when a bloody coup turns their world upside-down, Cornelia and Marcella—along with their cousins, one a collector of husbands and lovers, the other a horse-mad beauty with no interest in romance—must maneuver carefully just to stay alive. As Cornelia tries to pick up the pieces of her shattered dreams, Marcella discovers a hidden talent for influencing the most powerful men in Rome. In the end, though, there can only be one Emperor…and one Empress. 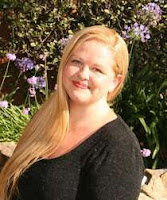 Kate Quinn is a native of southern California. She attended Boston University, where she earned a Bachelor’s and Master’s degree in Classical Voice. A lifelong history buff, she first got hooked on ancient Rome while watching I, Claudius at the age of seven. Still in elementary school when she saw the movie Spartacus, she resolved to someday write a book about a gladiator. That ambition turned into Mistress of Rome, written when she was a freshman in college.

“I was alone in a brand-new city – I knew no one and nothing about Boston, so I escaped into ancient Rome instead. I didn’t even have a computer, but I didn’t let that stop me.” Mistress of Rome was completed in four months, written in six-hour stretches in the Boston University basement computer lab while listening to the Gladiator soundtrack on repeat. It has now been translated into multiple languages and has been followed by a prequel, Daughters of Rome.

Kate is currently working on her third novel, set during the reign of Emperor Trajan. She also has succumbed to the blogging bug, and keeps a blog filled with trivia, pet peeves, and interesting facts about historical fiction. She and her husband live in California, and her interests include opera, action movies, cooking, and the Boston Red Sox.

You can buy your own copy of Daughters of Rome by Kate Quinn here in the US and here in Canada. Be sure to pop in tomorrow when Kate joins us with a guest post and a giveaway of her newest novel, Daughters of Rome!