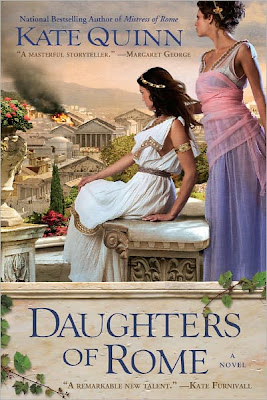 Today Peeking Between the Pages welcomes Kate Quinn, author of Daughters of Rome which released on April 5/11. I became a fan of Kate’s after reading Mistress of Rome (my review) which was a fantastic read. I haven’t yet had a chance to read Daughters of Rome but it’s up next and I’m anxious to get to it as I expect it will be just as good as her first novel was. Kate joins us today to talk about why she loves ancient Rome in a post entitled The Era Next Door…

Let’s try a scientific experiment: plunk a 21st century girl into a time machine and send her back to the Middle Ages, a mere six hundred years ago. Six hundred years is just a smidge in the broad scope of history, but your average modern girl would die of culture shock: the dirt, the fleas, the burn-’em-at-the-stake aspect of religion, the rampant violence . . . the lack of dental care and regular bathing alone would probably kill a modern lass. But turn the dial on that time machine back a further fourteen hundred years to set the same girl down in Imperial Rome, and she might not do too badly. Ancient Rome might be a full two thousand years removed from us as opposed to a mere six hundred – but culturally, it’s a lot closer than we think.

So our 21st century girl lands in 1st century Rome. Let’s assume she’s granted instant understanding of Latin, and her Gap jeans and H&M jacket have been translated into a belted linen dress and fringed cloak. She’s still wearing her Gucci shoes – gladiator sandals are in, first century or twenty-first. She spends the day wandering around Rome, and she’s pleasantly surprised by what she finds there. It’s a raucous bustling city, not unlike Boston or L.A: the same stray dogs, the same vendors trying to get her to buy their displays of cheap bracelets or cooking pans, the same blanket-wrapped old men panhandling for money, only these old men are ex-legionaries from Gaul rather than Vietnam veterans. The obscene graffiti is the same: names in hearts, team slogans, and announcements like Julia fellat Gaius are fairly universal regardless of the language. She buys a greasy but tasty meat-and-bread concoction from a local stand – the Roman equivalent of a Big Mac. She sees posters for a new play: “Phaedra, coming soon to the Theatre of Marcellus, starring the world-famous Nestor in the role of Hippolytus!” She sees a newsreader reading off the daily announcements, much like Robin Mead doing the morning news only there’s no irritating commercial breaks from Chevy and Clearasil. Lawyers in sweaty togas crowd one particular plaza angling for new clients, just like sleazy ambulance chasers back home. And almost everybody is clean – bathhouses are available to everybody, unlike the Middle Ages where even the rich stank.

Our girl feels hot and tired by now, so a trip to the bathhouse sounds like a good idea. She pays a small fee (her ATM card has been replaced by a handful of sesterces and denarii) and goes inside, blinking at this gorgeous marble place and wondering if the time machine has somehow sent her to a modern day spa. Everywhere she looks women are getting massaged, basking in steam rooms, having their nails done, and gossiping up a storm. Our 21st century girl pays a visit to the lavatorium (marble toilets and running water!) and is afterward presented with a list of spa services. She finds out that she can shave her legs, enjoy a facial, and get her roots touched up (the bathhouse attendant recommends a henna rinse). While getting a bikini wax (yes, Roman women had them) she gossips with the woman on the next massage slab who is on her fourth husband and who advises that a pessary of auyt gum and acacia tips is the most infallible birth control ever (“and if you don’t believe it, my dear, just look at the laws the Senate keep passing about the declining birth rate!”) Our girl is also pleased to look at the bathhouse clients around her, and realize that Roman women clearly don’t hit the gym to stay beautiful. The desired look here is less Elena from “The Vampire Diaries” and more Joan from “Mad Men”: voluptuous, white-skinned, and muscle-free. And the men are even better: clean-shaven and short-haired is in for Roman men, so no moody goatee boys or wannabe musician-types who think a soul patch is the height of fashion.

Polished and gleaming down to her pedicured toes, Miss 21st Century decides on an afternoon’s entertainment and hesitates between the gladiator games and the chariot racing. Gladiators fighting to the death sounds a little WWF (there isn’t much difference, except that gladiators have a shorter career) so she picks the chariot races. She hails a hired litter born on the backs of six loping carriers (much easier than hailing a cab in New York City), and gets a ride to the Circus Maximus. It’s just like the race scene from Ben Hur, chariots racketing around at top speeds, and fans going bonkers every time their team wins. The Roman chariot-racing scene has four factions named after colors – Blues, Reds, Whites, and Greens – and our girl learns that sports fans in Rome are just as bad as sports fans back home. She quickly learns that GREENS SUCK and REDS RULE and Derricus the Blues charioteer can beat the Whites charioteer all the way back to Saturnalia, and that men waving team flags and shrieking team slogans is something else the Romans apparently invented along with running water. But the chariot races do turn out to be a terrific dating hot-spot: seating isn’t segregated by sex, like it is for the gladiatorial games, so cute guys in team colors surround her at once with offers to buy her beer (yes, they had beer) and explain the racing rules (yes, they had guys droning about sports). Afterward she watches squealing women crowd around the winning charioteers begging for autographs and dates. Even George Clooney never got groupies like this.

She has several invitations to dinner after that from her various chariot racing admirers, and even a proposal of marriage. For a moment she’s tempted: the guy is cute; he owns a shipping company; he’s promised to take her on a cruise down the Nile when he next goes to Egypt on business; and if it doesn’t work out, well, the Romans don’t do divorce lawyers so all she’d have to do to be legally single again is move out. And there are other things to like about this place: draped tunics are very flattering (no more jeggings!), women can have makeup and pierced ears without being considered whores (some cultures haven’t gotten that far in the 21st century yet), no one cares what religion you practice (ditto), and you can take a daily bath without being told your skin will wash off (unlike the Middle Ages). The Romans don’t have coffee shops but they do have wine bars, and chariot racing is more interesting than football any day. But the time machine is taking off soon, so our 21st century girl decides – with real regret – to go home.

That, in a nutshell, is why I love ancient Rome. The slave trade and the gladiators dying in the arena might give a modern audience pause, but many other things are so familiar. From sports fans to fast food, from running water and daily baths to birth control and no-fault divorce, the Romans pioneered cultural traditions that wouldn’t be seen again on a widespread scale for two thousand years. Ancient Rome might have existed a long time ago, but in some ways, it’s right next door.

So if anyone has a time machine, I’d love to borrow it. I want a day on the town in the era of the books I write.

Kate, that was such a fantastic post! I’d love to join you in that time machine! Thanks so much for taking the time to write such a great piece and visiting Peeking Between the Pages once again!
__________

A.D. 69. Nero is dead. The Roman Empire is up for the taking. With bloodshed spilling out of the palace and into the streets of Rome, chaos has become the status quo. The Year of Four Emperors will change everything—especially the lives of two sisters with a very personal stake in the outcome…

Elegant and ambitious, Cornelia embodies the essence of the perfect Roman wife. She lives to one day see her loyal husband as Emperor. Her sister Marcella is more withdrawn, content to witness history rather than make it. Even so, Marcella has her share of distinguished suitors, from a cutthroat contender for the throne to a politician’s son who swears that someday he will be Emperor.

But when a bloody coup turns their world upside-down, Cornelia and Marcella—along with their cousins, one a collector of husbands and lovers, the other a horse-mad beauty with no interest in romance—must maneuver carefully just to stay alive. As Cornelia tries to pick up the pieces of her shattered dreams, Marcella discovers a hidden talent for influencing the most powerful men in Rome. In the end, though, there can only be one Emperor…and one Empress. 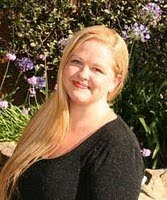 Kate Quinn is a native of southern California. She attended Boston University, where she earned a Bachelor’s and Master’s degree in Classical Voice. A lifelong history buff, she first got hooked on ancient Rome while watching I, Claudius at the age of seven. Still in elementary school when she saw the movie Spartacus, she resolved to someday write a book about a gladiator. That ambition turned into Mistress of Rome, written when she was a freshman in college.

“I was alone in a brand-new city – I knew no one and nothing about Boston, so I escaped into ancient Rome instead. I didn’t even have a computer, but I didn’t let that stop me.” Mistress of Rome was completed in four months, written in six-hour stretches in the Boston University basement computer lab while listening to the Gladiator soundtrack on repeat. It has now been translated into multiple languages and has been followed by a prequel, Daughters of Rome.

Kate is currently working on her third novel, set during the reign of Emperor Trajan. She also has succumbed to the blogging bug, and keeps a blog filled with trivia, pet peeves, and interesting facts about historical fiction. She and her husband live in California, and her interests include opera, action movies, cooking, and the Boston Red Sox.

I have one copy of Daughters of Rome by Kate Quinn to share with my readers. To enter…

This giveaway is open to US & Canadian residents only (no PO boxes) and I will draw for the winner on Saturday, April 30/11. Good luck to you all!