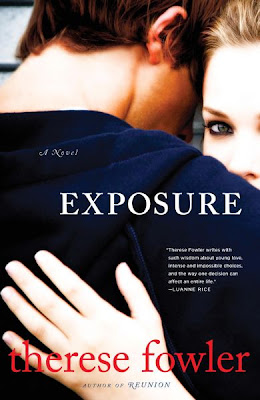 Exposure by Therese Fowler is an emotional and gripping novel that will resonate in your heart and mind long after you turn the last page and put the novel down. I’ve read one other novel by Therese Fowler and that was Souvenir which totally pulled me in as well and I loved it, but she has really outdone herself with Exposure. I found myself becoming so emotionally involved with this novel, ranging from shock and anger at the situation all the way to amazement at how the characters in this novel handle what has happened.

Exposure’s subject matter has such presence in our headlines today as it deals with teens ‘sexting’, which if you’re not knowledgeable on the subject is teens sending explicit photos of themselves to other teens. But what happens when two teens, almost adults, are in love and wanting to spend their lives together? What if they, for fun, send photos to each other of themselves with nothing on in artful positions? Even worse, what if they are discovered by an extremely overbearing and overprotective father? The story of what these two teens, 18 year old Anthony and 17 year old Amelia go through is what makes the novel Exposure so powerful and real to life.

Amelia has a father who sees the world through his own rose tinted glasses. He sees Amelia still as his little girl and he has a whole list of things he’d like to see her accomplish in life including who the right type of boy is to date and eventually marry. Does what she want matter? – no, not at all because according to Mr. Wilkes he knows better than a teen girl ever could and it’s his job to steer her in the right direction. The problem with that is love nor do dreams just wither and die because someone wants them to.

Amelia and Anthony have been secretly dating. Amelia isn’t allowed to date and even if she was her father would never allow it to a boy like Anthony who loves the arts. The only parent privy to this romance is Anthony’s mother Kim and that’s because of the strong relationship she has with her son. Kim is a teacher and pretty in tune with teens so she gets young love and she trusts her son. She feels he has a level head on his shoulders, he does really well in school, and has never given her a reason not to believe in him.

The simplest act can turn a world upside down though. Amelia forgot her laptop at home and when she goes home to pick it up she finds her father has managed to worm his way into her account and has found explicit photos of Anthony. He is outraged and immediately flies off the handle and phones the police. Mr. Wilkes is a wealthy man and he uses everything he can think of to convince everyone that Anthony is a sexual predator that lured his daughter into something sick and twisted. As time goes on he becomes even more angry as he finds that his daughter sent explicit photos of herself to Anthony but still he doesn’t see the truth – he still believes that Amelia was forced into all of this.

No good ever comes from a father using all the influence he can that money can buy or a DA who is dead set on making these teens an example not to mention a tool in furthering his political ambitions. Amelia and Anthony are torn apart, arrested, and charged with a multitude of charges. Desperate to be together they take matters into their own hands and risk absolutely everything to prove to everyone that by being in love with each other, they ultimately did nothing wrong.

I had such a reaction to this novel as I was reading it. I don’t condone teen ‘sexting’ in any way but what really angered me was the father’s reaction. Instead of sitting down and listening to his daughter and trying to work things out on a private basis, he exploded and took the worst turn he could by calling the police. Not only did he ruin Anthony’s life but he ended up dragging his daughter through the coals as well and that was something he hadn’t expected to happen. A lot of what bothered me was that Anthony was already eighteen and Amelia would be in months – legally adults. What they did was wrong – yes – but they were in love and certainly not thinking of the consequences of their actions. There is so much more I could say about this book but really, it is a book you need to read for yourself.

Exposure by Therese Fowler would make a fantastic book club selection! There will be no shortage of topics to discuss from the huge problem of sexting among our teens, teen relationships, parent/child relationships, and just what you would do if you found yourself in this situation. In fact, while Exposure is fictional, it is also inspired by the author experiencing this very incident in her own life with her son and I have such a great respect for her for opening up something that would have been a really difficult time in the lives of her family. I think most of all Exposure is important in that it brings to life this very real issue of sexting among teens and shows that lives can be changed forever and not in a good way because of it. It’s important that teens understand that it’s not ok thereby making this an important book for parents and older teens to experience.

My copy of Exposure by Therese Fowler was received for review from Pump Up Your Book! and the Publisher.