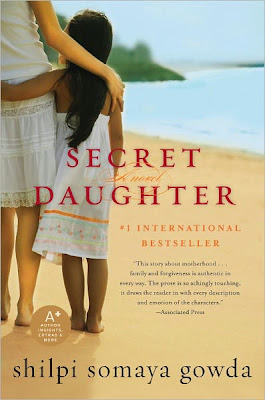 Secret Daughter by Shilpi Somaya Gowda was such a great read for me! It’ll be making my favorites list for this year. I’m already quite fond of novels that take me away to another place and culture and Secret Daughter does just that. This is a powerful novel that delves deeply into culture, motherhood, and a person’s identity; it is both heartbreaking and uplifting.

The novel shifts between two compelling story lines, one taking place in India and one in America. The year is 1984 and a baby girl is born to Kavita in a small village in India. Her first daughter had been taken away by her husband’s family and killed. She was not going to have that happen to this one. Instead she takes her daughter to an orphanage in the hopes that she will have a better life or at the very least, a chance at one. She names her Usha which means dawn and leaves with her one silver bangle that she slips on Usha’s ankle.

A world away doctors, Somer and Krishnan, have been trying to have a child. Unfortunately it turns out that Somer is unable to have children having gone into early menopause in her thirties. She is devastated and feels betrayed by her body. Krishnan tells her that they have other options. His mother has been telling him about an orphanage in Bombay and all the children that need adopting there. As Krishnan is from India, he feels that this would be a good match for them. At first Somer is hesitant but eventually she agrees to adopt from India. They travel to India and eventually bring home their baby who is named Asha, but was born Usha.

As the story evolves we see life from both sides. We see the agony that Kavita goes through having had to give up her daughter even though she knows it was for the best – she just wishes she knew for sure what would become of her daughter. Jasu, her husband moves them to Mumbai in the hopes of giving a better life for their son Vijay who they had the year after Usha. Life doesn’t go well for them in the beginning; there are many hardships to endure, but eventually things turn around for them and life gets better. Surprisingly for how much I disliked Jasu for not wanting daughters I thought that ultimately he ended up being a good husband and really did love Kavita. No matter what was going on in their lives, whether good or bad, Kavita could not ever forget the baby girl she had to give up.

Somer and Krishnan are having their own struggles. Well Somer is anyhow. Much of the time she really feels out of place in her own family. Asha and Krishnan have their heritage in common but she has never really been that interested in learning much about Krishnan’s culture. As well she really tries to steer Asha towards life in America, clearly forgetting that the girl needs to learn about her own culture. Asha really wants to learn about her culture and meet her relatives in India – so much so that she ends up getting a grant to go to India and write a story about the underprivileged there.

So begins Asha’s search for her birth parents and her delight in meeting this family that aren’t even her blood relatives but take her in and love her like one of their own. Back in America Somer and Krishnan have separated and this is just what Somer needs to get her life back. She realizes that along the way she gave up her identity and herself for her family and all she really succeeded in doing was taking away that piece of herself that made her so special. As she begins to like herself again she learns that sometimes love means compromising yourself even when it’s not really what you wanted to do.

Secret Daughter by Shilpi Somaya Gowda is a fantastic novel! It is emotional and powerful. The author writes beautifully and her descriptions of India, the food, and the culture are amazing. I felt I was right there within the pages of this story tasting the spicy food or picking out a sari to wear. I can’t even pick out a favorite character because this is one of those books in which you feel drawn to all of them. I did however feel more drawn to the story line in India but only because I loved to read about a culture that is so different from my own. There are some parts of the book that I found upsetting like what happens to baby girls and just how women are treated in general but that is part of India and the story. If you enjoy novels that enable you to learn about another culture while reading a story that will tug on your heart then Secret Daughter is one you should pick up!

I read Secret Daughter by Shilpi Somaya Gowda for her book tour with TLC Book Tours. You can see other opinions of the novel from blogggers on the tour here. Be sure to visit Shilpi Somaya Gowda’s website and you can also find her on Facebook and Twitter. You can purchase your own copy of this amazing novel here in the US and here in Canada.

My copy of Secret Daughter by Shilpi Somaya Gowda was received for review from TLC Book Tours and the Publisher.