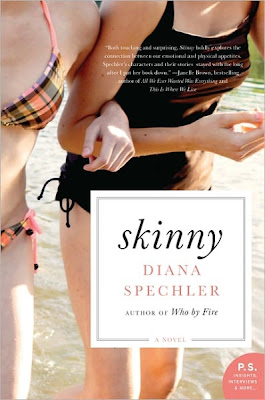 Skinny by Diana Spechler is a novel that explores the relationship between food and emotions. What are the reasons we may overindulge – is it pain, avoidance, or something else? Does the desire to be skinny overrule anything else and does it truly make us happy when we finally get there? Skinny is really a novel about a woman who loses herself in food and self indulgence and ultimately finds her way back to herself with a few lessons learned along the way.

Gray Lachmann is twenty-six years old and eating herself into oblivion. Her father passed away a year ago and Gray blames herself for his death. Since his death she has found her whole life slipping away. She has lost interest in her boyfriend Mikey, her work, and mostly herself. The only place she can manage to lose herself for awhile is in food and she freely packs it in. For a while she ignores everything but when she finally comes up for air to take care of her father’s will she is left with a surprise – she may have a sister out there.

Gray’s next move is to find out as much as she can about Eden who she feels is quite possibly her sister from an affair her father had. She learns that Eden plans to attend a fat camp so Gray finds out as much as she can about the camp and applies to work as a counselor. Now, while Gray has put on some pounds, she’s still not considered obese but she tells the camp about her father being obese and dying and how she wants to help these kids. She’s hired. She packs up the car and heads to the camp for what she hopes, in time, will be a reunion with the sister she’s never known existed.

Life at camp doesn’t go quite as Gray had imagined and she can’t seem to find a good time to tell Eden that they are related as Eden is quite moody and keeps to herself. In the meantime though she discovers that the camp director is more than a little weird, the camp really isn’t run properly, she begins to blatantly flirt with the personal trainer, and she begins to find herself caring about these girls in her charge at the camp. Mostly though she finds that she isn’t eating crazily anymore and she’s exercising a lot more which, in turn, is taking her weight off. Things start to go awry though and Gray sees her life unraveling once again.

Skinny is an interesting novel in that I think so many women put so much into their appearance and being ‘thin’. I think it’s especially interesting when you look at the effect of models and magazines on our teens. Everywhere they look there is a skinny and beautiful model looking back at them. If that’s not what they look like, well then they perceive it as there is something wrong with them leading them to want to change themselves. Now there is nothing wrong with losing weight and getting healthy – the worry comes in if it leads to binging and purging, etc.

I like how this novel looked at the emotions we connect to food. How we use food to soothe grief or longing. I connected to this story in that I was always an emotional eater and when I was upset I would eat, thereby gaining some extra weight. When Buddy passed I went in the complete opposite direction losing almost thirty-five pounds now. Do I feel better – sure I do. Am I happier – in some ways yes, in some no. Losing weight and being skinny doesn’t necessarily pull your life together and make it perfect and I think that’s what the novel Skinny tries to show us.

I did enjoy Skinny by Diana Spechler and while the first half of the story moved a bit slowly for me, the last half took off more and really held my interest. While I don’t think I connected to the characters really, I did connect to the story itself. I look forward to reading more of Diana Spechler’s work.

My copy of Skinny by Diana Spechler was received for review from TLC Book Tours and the Publisher.