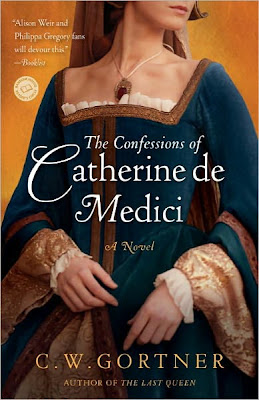 There are some authors who just have a way of drawing you into the worlds they write about and keep you captivated throughout and C.W. Gortner is one of those authors! C.W. Gortner weaves fiction and history together so brilliantly in The Confessions of Catherine de Medici that you feel you have been thrown back in history to live the lives of the royals, spend time at court, and just try to make sure you survive the back stabbing and treachery that is always going on. In short, it is a fantastic novel and C.W. Gortner has quickly become one of my favorite authors!

I found Catherine de Medici to be a fascinating woman and I was held enthralled by this novel. The novel is portrayed through Catherine and we journey with her from a young girl to a mother and finally to an old woman and what a trip it is! Catherine de Medici has had a bad reputation throughout history for meddling in the occult, poisoning those she sought to be rid off, and basically doing anything to maintain power. C.W. Gortner has woven a story around this legend that shows us who Catherine may have been and why she may have done certain things throughout history – he gives her a voice.

At a young age Catherine is taken to a convent in her homeland of Italy where she is treated despicably and she is quite certain she will be left there to die. Her uncle, the Pope, has different plans for her though. His plan is to use her politically to his advantage as the last of the Medici line and marry her off to Henri II, who becomes King of France after his father’s death. Catherine, having been brought up to believe that she was the last saving grace of the Medici line takes her responsibilities seriously and is determined to make the best of what fate has handed her.

All is not a bed of roses though when she arrives in France to find that her future husband, Henri II, is very much in love with another woman, his mistress Diane de Poitiers. Worse yet is she controls most everything in Henri’s life including how much time he spends with his wife. At first this is a problem as no heirs are being conceived but one thing Diane de Poitiers was not – was stupid. She knew that an heir was important to her survival as mistress and she made sure Henri took his duty more seriously and got to work on producing an heir. Once Catherine began to have children, Diane even took over the care and control of them as well.

After Henri II’s death, Catherine took over the care of her own children even though the older ones barely knew who she was. She sought to protect them with a vengeance and would do anything to see them survive and prosper. France, over the years she was Queen and then Queen Mother, was in a religious turmoil that threw the country into war – many people were starving and many were killed. All through these years Catherine fought, even through many tragedies, to keep her sons on the throne and ruling France. Her determination and reputation for doing anything in her power to ensure this made her a formidable figure to contend with and over the years she rose to a very powerful woman.

What I loved about this novel was how real Catherine de Medici is portrayed. We can see her as a woman – a woman who loved, who bore children and loved them with everything she had, to a woman who would do anything for France and keeping her sons on the throne. I also really enjoyed how C.W. Gortner wove Catherine’s interest in the dark arts into the story. It is common knowledge that Catherine had the ‘sight’. She would be overcome with these dreams in which she would see things that were going to happen or were happening and they always came to pass. She believed strongly in the reading of charts, people’s signs and what it meant to their lives, and she always sought the predictions of people who could see into the future. As I said previously I found Catherine de Medici to be a fascinating woman and although I have heard of her before I certainly haven’t read anything that delved into her life and made her so real to me. I found her to be a woman who would fight fearlessly for her family and what she believed in and in the 1500’s that was pretty incredible for a woman!

I enjoy C.W. Gortner’s novels because he brings historical fiction to life in a way that is interesting and makes you want to keep reading. There is never a dull moment and his descriptions of life, the court, the clothes, the jewelry, the backstabbing, treachery and war – all of it – make you feel as though you are right there in the moment and to me that is the mark of a truly amazing author. I would recommend The Confessions of Catherine de Medici or really any of C.W. Gortner’s novels to those who love historical fiction! 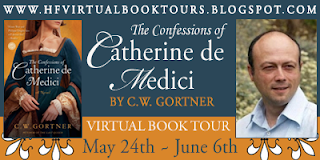 I have one copy of The Confessions of Catherine de Medici by C.W. Gortner up for grabs to US residents only but wait…I also have my copy up for grabs to anyone in the world! So that’s two copies up for giveaway – please be sure to state if you’re an international entry for me as one of these is US only! To enter…

My copy of The Confessions of Catherine de Medici by C.W. Gortner was received for review from Historical Fiction Virtual Book Tours and the Publisher.