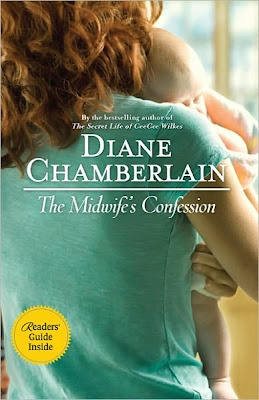 The Midwife’s Confession by Diane Chamberlain is a page-turner that will have you up till the early hours of the morning as it did me. I literally could not put this book down and I enjoyed it immensely. It is a powerful and emotional novel that touches on family, love, lies, suicide, friendship and the devastating effects of long kept secrets that were better left buried.

Noelle, Emerson, and Tara have been best friends since they first met in college. As far as they know they have shared all their deepest hopes and dreams and know each other inside and out. Needless to say when Emerson discovers Noelle dead after committing suicide, both she and Tara are stunned and lost as to why their best friend would do this. They blamed themselves for not seeing any signs that Noelle was that unhappy. It never seemed to them that she was as she seemed quite content with her life as it was. Yet, they obviously had missed something because Noelle felt bad enough over something in her life to do the unthinkable.

Worst yet, Emerson and Tara begin to discover other things about Noelle; secrets that she had been keeping from them. As they begin to delve deeper and deeper into what was their supposed best friend Noelle’s life, they find they really didn’t know her at all. Noelle had been a midwife and by all accounts a very good one but along the way she took many wrong turns in her life and made decisions that would have devastating effects on many people’s lives, including those of her best friends.

I was quite drawn to the character of Tara and Emerson as well but Tara really pulled at my heart. She had lost her husband not that long before Noelle takes her life and she’s having problems with her daughter Grace. Grace was a daddy’s girl and without him she is lost and angry and the person that is being taken out on is her mom. However as more and more of Noelle’s secrets come to light and Grace is thrown into a dilemma of her own, she begins to realize just how important her mom’s love is and just how much she loves her. What I loved most about Tara and Emerson was their bond of friendship with each other. They stood by each other and were there for each no matter what. Even in anger, they were worried about the other and wanted to be there for them. Friendship like that is rare and special and I love to read novels that include them.

If you’re looking for a great pick for your book club I think The Midwife’s Confession by Diane Chamberlain would be a terrific pick! There are many topics for discussion ranging from marriage, motherhood, mother/daughter relationships, death, suicide, friendships, and many more. I have no doubt that this book could keep you all talking for a good long time but just in case there is a reading guide to help you along.

At it’s heart The Midwife’s Confession by Diane Chamberlain is a book about friendships, loyalty, and just how far a person will go and the secrets they will keep to protect those they love. I recommend this book to all of you who love a book about women’s friendships and quite simply a book that will affect you emotionally as you read it. These are the types of books that are my favorite and if they are yours too, then The Midwife’s Confession is one you should pick up!

My copy of The Midwife’s Confession by Diane Chamberlain was received for review from Meryl L. Moss Media Relations.