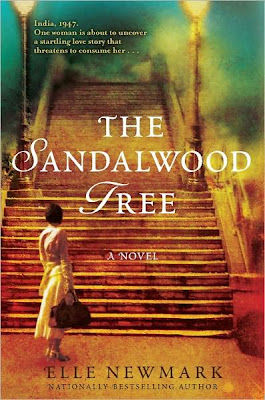 The Sandalwood Tree by Elle Newmark is yet another of her novels that will have a special place on my keeper shelf. Elle Newmark has an amazing way of bringing both her characters and the setting of her stories come to life. Her first novel The Book of Unholy Mischief was another favorite of mine so I was really excited to read The Sandalwood Tree and I was not disappointed. Once again Elle Newmark held me captive and this time around brought war torn India of the past to life for me.

There are two story lines with a span of almost a hundred years between them. The first being Evie, her husband Martin, and son Billy. They travel to India in 1947 on a scholarship that Martin earns to write up his thesis on the end of British rule. Martin had not wanted to bring his family as things were not very calm in India at the time but eventually Evie convinces him it’s the right thing to do as she is secretly hoping that getting away will help to mend their marriage that has taken a hard hit by World War II which Martin served in and came back from a shell of the man he once was.

The second story line comes to life starting with letters that Evie finds hidden in her kitchen while scrubbing down a wall. These letters appear to be correspondence between two English women who had lived in the same house back in the 1800’s – Felicity Chadwick and Adela Winfield. Evie is fascinated by the little she is able to read and with not much else to occupy her time she decides to find out as much as she can about the two of them. She manages on a few different occasions to find out yet more information about these women. What she ultimately learns about them has resounding effects on both Evie and her family as well as others in Simla where they are living.

The novel alternates seamlessly between Evie and her family in 1947 to Felicity and Adela and their lives in the 1800’s. In both settings India is in turmoil and the author brings the sights, sounds and smells to life for us. While I found the parts about the turmoil in both time periods interesting, it was more the relationships between Evie and her husband and between Felicity and Adela that I found the most intriguing. Of the two story lines, while I liked both, I think I found the one of Felicity and Adela more interesting although I can’t really pinpoint why. Maybe it was the characters themselves or what was happening to them but I loved the parts of the book that had to do with them. What I enjoyed most was the whole aspect of hidden letters and someone finding them almost a hundred years later – how exciting it would be to actually have something like that happen! I also liked the way the two stories intertwined together in the end to come to a very satisfying conclusion.

The Sandalwood Tree by Elle Newmark has all the elements of a good book to me – love, relationships, betrayals, the historical aspect, and a setting in another time and place. Above all else, Elle Newmark’s writing is exquisite. She writes with such passion and vivid descriptions of the people and places that you can’t help but feel you are a part of it all and I absolutely love that quality in a writer. For those who love a book that will take you out of yourself for a while and give you a deeply satisfying reading experience, I would definitely say The Sandalwood Tree just might be the read for you!

My copy of The Sandalwood Tree by Elle Newmark was received for review from the author and Pump Up Your Book.