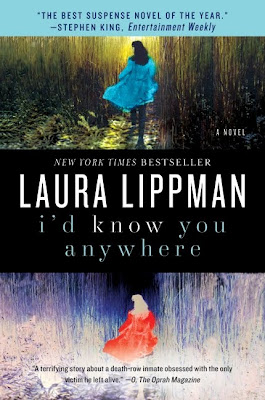 Hi everyone! I’ve got a fabulous giveaway to share with you all to celebrate the paperback release on May 3/11 of I’d Know You Anywhere by Laura Lippman!

I’D KNOW YOU ANYWHERE is a finalist for the Los Angeles Times Book Award (mystery category) and for the 2011 Edgar Award in the Best Novel category. The book was also nominated for a Romantic Times Reviewer’s Choice Award. I’D KNOW YOU ANYWHERE was included on numerous “Best of 2010” lists, including Stephen King’s list in Entertainment Weekly. Lippman has previously won Edgar, Shamus, Anthony, Gumshoe and Quill Awards for her work. The Washington Post calls her “One of the best novelists around, period.”

I’m about halfway through I’d Know You Anywhere by Laura Lippman and it’s fantastic. I hope to finish it up over the next week or so. I have so much on my plate right now but really wanted to fit it in. For now I’m going to share some goodies about the book with you and stay tuned for the fantastic giveaway later in the post.

About the Book (from HarperCollins)

There was your photo, in a magazine. Of course, you are older now. Still, I’d know you anywhere.

Suburban wife and mother Eliza Benedict’s peaceful world falls off its axis when a letter arrives from Walter Bowman. In the summer of 1985, when Eliza was fifteen, she was kidnapped by this man and held hostage for almost six weeks. Now he’s on death row in Virginia for the rape and murder of his final victim, and Eliza wants nothing to do with him. Walter, however, is unpredictable when ignored—as Eliza knows only too well—and to shelter her children from the nightmare of her past, she’ll see him one last time.

But Walter is after something more than forgiveness: He wants Eliza to save his life . . . and he wants her to remember the truth about that long-ago summer and release the terrible secret she’s keeping buried inside.

Read an excerpt.
Listen to an excerpt.
Check out the Reading Guide – perfect for your book club!

About the Author (from HarperCollins)

Since the publication of her first novel, Baltimore Blues, in 1997, Laura Lippman has won virtually every major award given to U.S. crime writings, including the Edgar Award, Anthony Award, Agatha Award, Nero Wolfe Award, Shamus Award, and the Quill Award. What the Dead Know, published in 2007, was a New York Times bestseller and was chosen as one of the best books of the year by critics at the New York Times, Washington Post, Publishers Weekly, People magazine, Village Voice, and the South Florida Sun-Sentinel.

Lippman has published twelve books to date. Her thirteenth, Another Thing to Fall, is the tenth installment in the popular Tess Monaghan series, which centers on a young private investigator in Baltimore. Hardly Knew Her, a collection of her short stories and a never-before-published novella, will be published in September 2008.

A former Baltimore Sun reporter, Lippman lives in the city and is working on her next novel.

The giveaway to celebrate the paperback release on May 3/11 of I’d Know You Anywhere by Laura Lippman is fantastic! There are 3 of Laura Lippman’s books available for this giveaway and there will be 3 winners – one for each book. The books up for grabs are: 1 copy of I’d Know You Anywhere, 1 copy of What the Dead Know, and 1 copy of Life Sentences. I’m going to draw separately for each book so no worries – let me know which you’d like to enter for if you’ve already read one of them. To enter…

This giveaway is open to US & Canadian residents only (no PO boxes) and I will draw for the 3 winners on Saturday, May 28/11. Good luck everyone!