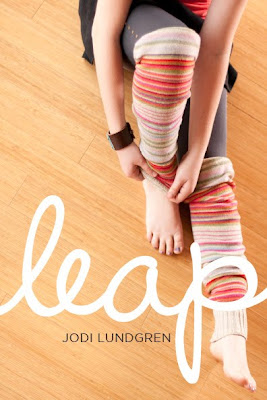 I am very pleased to welcome Jodi Lundgren, author of Leap, to Peeking Between the Pages. Leap is a wonderful young adult novel that will appeal to teen girls and their mothers as well. I read it a while back and I really enjoyed it – it’s written in a straight forward style that I think appeals to young people (my review). Jodi joins us today with a guest post entitled Sex and the YA Novel…

When people ask me what age group my new book Leap is intended for, I have trouble answering. “Well,” I begin, “I wrote it in the voice of a fifteen-year-old, so I was imagining fifteen-year-olds reading it.” (Never mind that I was wholly absorbed as an adult in writing it, so imagined adults reading it, too!) One sales rep told me it was troubling that the plot involves sex, because kids typically read about characters older than themselves. And YA fiction is generally marketed as “12 and up.”

A case in point: my sister, the mother of four-year-old twin girls, just read Leap. The book was dedicated to her (as well as to my Mom), so I was eager for her response. First she told me how much she enjoyed it. But then she said, “I hope you don’t think I’m going to let the girls read this when they’re twelve. I hope to protect them longer than that.” (One of my nieces later put the book on her bedside table and said, “That’s a book for me when I’m older.”) I deeply respect my sister’s intention, and it would be wonderful if more parents read the books their kids were interested in and had open discussions about them. Every family dinner could be a book club meeting!

But I also remember hushed moments at age 12 in my friend Michele’s bedroom. She tiptoed to her dresser, slid open the top drawer, and pulled out what looked like a t-shirt. I held my breath in anticipation. Slowly and carefully, Michele unfolded the shirt to reveal Forever by Judy Blume—on loan from her older sister. We sat side by side on the edge of her bed. Michele flipped to a dog-eared page and pointed. My eyes followed her finger and my lips soundlessly mouthed the words. Of course, we’d gone straight to a “dirty” bit. We barely breathed as we read about Kath and Michael and—the silliest part of all—Michael’s “friend” inside his jeans, Ralph. Ralph! There was a boy in our class named Ralph. I don’t think we ever looked at him the same way again.

Of course, Judy Blume’s book has been controversial since its date of publication.
But as twelve-year-olds, we sought it out with fearful fascination. That we weren’t supposed to be reading it made the experience more thrilling, but also more confusing. First, we had to process the shocking scenes on our own. Then, we had to figure out what exactly made them so wrong. Was it the nudity and physical actions themselves? Was it the age of the people having sex? Was it that they weren’t married? Was it that one was a boy and one was a girl? Was it our age that made it wrong? Perhaps all we needed to avoid were boys who gave names to their private parts. Hopefully, that wouldn’t be too hard to do.

In Leap, my character Natalie—like so many girls today—still faces a lot of the same confusion about sex as my friends and I did. On the one hand, she is taught to flaunt her body in a sexualized way in jazz dance class. On the other, she is taunted with the word “slut” when her peers suspect her of becoming sexually active. On top of this, her well-meaning mother grants her a little too much independence too soon. Like a lot of teens, Natalie gets into situations that she’s not quite ready to handle. But the beauty of it is that she comes out the other side. I made sure to give Natalie the right resources at the right time so that any girl in a similar situation would have an example of how to cope.

My first novel, Touched, was called by one reviewer “a survival manual for young adults.” I think young people need all kinds of books, and that some of those books need to deal with life events in a realistic way. A reader might live vicariously through a character’s mistakes and never need to make the same ones herself. Another reader, who has already taken some wrong turns, might be looking for a road map to get her life back on track.

When we make certain topics (or books) taboo, we strengthen their allure, but at the same time, we shroud them in secrecy. Secrecy then breeds misunderstanding and shame. So I don’t think Leap should be either avoided or sought out specifically for its sexual content. Instead, I hope it can be read, enjoyed, and discussed by both young people and adults. Honest communication doesn’t make complex issues disappear, but it certainly helps us come to terms with them.
__________

Thank you so much for this guest post Jodi. I know when I was a teen, anything I was told not to do became something I really wanted to do. I think this is a perfect book for a mom to read and then share with her daughter.
__________

Finally, Natalie’s turned fifteen. She’s officially a grown-up (just tell her mother that) and ready for anything. School is out, and she and her best friend Sasha are going to be practicing with their dance team all summer.

Dancing is Natalie’s passion — it’s what got her through the break-up of her parents’ marriage, and her father’s move halfway across the country. Now she needs it more than ever as she tries to navigate the unpredictable world of older boys — specifically Kevin, Sasha’s older brother — and learn the difference between love and lust.

When her friendship with Sasha goes on the rocks, her relationship with Kevin goes too far, and her mother reveals a shocking truth, Natalie finds strength in her dancing. Will it be enough? And what will happen when a new teacher introduces her to the world of modern dance—will she find the confidence to take it on?

About the Author (from Jodi)

Jodi Lundgren grew up in Victoria BC Canada dancing and writing. Later on, she trained and performed as a dancer while pursuing a Ph.D. in English in Seattle, WA. The winner of a Canada Council Emerging Writer’s grant, she has published a previous novel, Touched (Anvil), and her short stories and creative non-fiction have appeared in Dropped Threads, Adbusters, Room of One’s Own, Capilano Review, sub-Terrain, and others. After two years as Writer-in-Residence at Thompson Rivers University in Kamloops BC, she returned to live in Victoria, where she teaches English and Creative Writing at Camosun College.

I have 2 copies of Leap by Jodi Lundgren to share with my readers. To enter…

This giveaway is open to US and Canadian residents only (no PO boxes) and I will draw for the winners on Saturday, May 28/11. Good luck to you all!