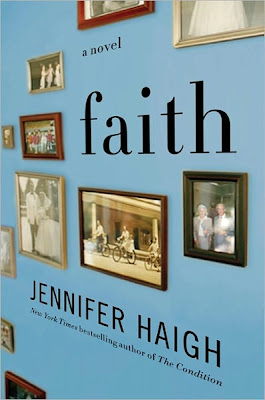 Faith by Jennifer Haigh is an exploration into the lives of a Catholic family that has been torn apart by scandal. We’ve all heard of the scandal involving the Catholic church and priests molesting boys. This novel delves deeply into the effects of what happens to the family when one of their own has been accused of molesting a young boy. It is a very emotional and powerful novel that keeps you involved because you want to know – is the accused guilty or not? and the journey through the events that lead up to the stunning ending will have you enthralled.

When Father Art Breen is accused of molesting a young boy he is devastated; even more so when he learns who it is. His family is torn – his mother refuses to believe anything bad about her son, his brother Mike, with young boys himself, is wondering if he’s guilty and refuses to have anything to do with him, and finally his sister Sheila who believes him innocent but still wants the truth of what really happened. The family is definitely feeling the negative effects of the scandal and Sheila and Mike, normally very close, are at opposite ends with Sheila believing they should be there for their brother. The bulk of the novel is built from here with Sheila digging for the truth – going through her brothers things, remembering chats with him, and talking to people who knew Art. She needs to understand how and why anyone could accuse her brother of such a thing.

Art is at a loss as to what to do with himself. The priesthood has been his life. From a young boy it’s all he’s ever wanted. Now he’s been removed from it and shuttled off to an apartment paid for by the church. Art has been sheltered by the church his whole life and suddenly being thrown out into the world is very hard for a man like him. The worst is when the posters start going up with his face on them and even more so when he learns his own brother doesn’t believe in his innocence. He goes back in his memories, reliving things, and this was by far my favorite parts of the book.

We learn that this family had many secrets that, in one way or another, form how they react to situations as adults. Art especially has been harboring some dark secrets in his past that make him question himself in relation to his actions with this young boy. I liked how the author made us sympathetic to Father Breen and also shows us how priests are human beings. For Art Breen this was especially difficult as he didn’t know how to separate the priesthood from being a man. He often wondered about what he’d missed out on or if he was capable of love at all. Ultimately it is exactly this that puts Art Breen in the direct line of fire when all these accounts of molestation start flying around.

For the most part I didn’t connect with any of the characters although I did grow to care about Father Breen. Yes, you wonder whether he’s guilty or not but as you learn about him and his life – the things he yearned for – you want to believe in his innocence. For some reason though, while I did enjoy this story, something was missing for me. Maybe it’s because I really became invested in the story halfway through or at times I found the way the story was told a bit confusing. Don’t get me wrong – I think this novel is beautifully written and so very powerful in it’s telling. For me, I think it’s mainly that disconnect with the characters even though the story itself is one that grips you, as it did me, especially in the later half.

Faith by Jennifer Haigh does just that – it explores the faith you have in your religion, your family, and ultimately yourself. It’s a novel that touches on family, marriage, secrets, lies, and it just begs to be discussed. I think it would make a good novel for a book club because, let’s face it, the topic of the Catholic church and the issues with the priests, is discussion enough. Yet this novel is so much more because it looks at the emotional side of it – the damage that such an accusation can result in. It changes lives forever. I’ve read all of Jennifer Haigh’s books and while this may not have been my favorite of all of them, I still think it’s a book well worth reading.

My copy of Faith by Jennifer Haigh was received for review from TLC Book Tours and the Publisher.