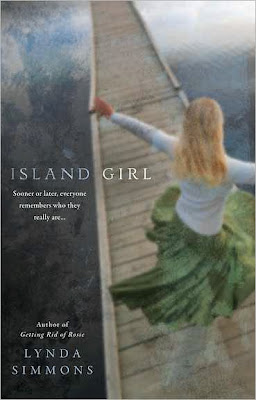 Island Girl by Lynda Simmons is a novel that will gather you into it’s pages and not let go. It is a story of family, friendship, forgiveness, and love that delves into the effects of alcoholism and Alzheimer’s on a family and in the person’s life in a very realistic and upfront manner. Island Girl will grab you emotionally and before you are even a few chapters in to the novel, you will find yourself caring deeply about what will happen to all of these people and you won’t be able to put it down until you reach the end.

Ruby’s life is all about making sure she knows what’s going on in her own life – notes posted on the ceiling, on the fridge – everywhere and her ever present notebook which is her lifeline is always with her. It knows what she’s supposed to be doing even when she doesn’t. Why you ask? Well fifty- five year old Ruby has early onset Alzheimer’s or the Big Al as she refers to it. She’s known for a while that she has it but until recently it had been under control with her meds. That is changing fast for her.

Ruby has always led a life different from others. She isn’t one to follow the pack but rather be in the lead. She likes to control things in her life and her daughters, Liz and Grace’s lives as well. Alzheimer’s is a tough cookie for her to swallow. She refuses to be one of those women who ends up in a nursing home having people care for her and she not having a clue as to what’s happening to her anymore. At this point she wants to focus on getting things straightened out in her life and making sure that her daughter Grace is taken care of when she’s gone.

Ruby’s daughter Grace, who is almost thirty, suffers from mild intellectual delay. She’s slow and doesn’t always catch on to things like others would. Two years ago she suffered a great tragedy and that is when Ruby brought her home to Ward’s Island to protect and care for her. Her daughter Liz on the other hand is very different from Grace. She’s outgoing and has always fought against anything her mother wanted for her. The one thing she does love more than anything is her sister Grace and she’ll do just about anything for her. Grace’s tragedy affected Liz’s life as well – it sent her straight into the hell of alcoholism.

The story alternates between the three women. With Ruby we learn that she has had men in and out of her life for as long as her girls can remember. The only one who stuck around was Mark and he became a father to the girls. However Ruby threw him out years ago but when she doesn’t know what else to do, she turns to him for advice. Lucky for her he still loves her and he comes back to the island with his twelve year old daughter Jocelyn in tow. The message that Ruby left him with when she came to see him is enough to make him want to stick close to her and care for her. At first Ruby just wants him to pack and go again but she starts to come around and wonders why she ever threw him out in the first place. For Ruby, all she wants is to see Liz come home before it’s too late. She wants to make sure Grace is cared for when she’s gone or simply unable to function anymore.

I loved all the characters in this book, flaws and all! Ruby could be difficult and I wanted to smuck her a few times but underneath it all, she really did just want the best for her girls. Grace just captured my heart, pure and simple. She has a beautiful nature and I loved the parts of the story that were hers. Liz, even though she was an alcoholic, was a good person. She was just unable to move on from the past and forgive her mother and herself. Alcohol was her way out. Mark and his daughter Jocelyn were great as well, especially Jocelyn. She was actually quite amusing to me. Another character I really liked and who played a much too small part for my liking was Liz’s roommate Nadia – from Russia. I loved her – her dialogue was hilarious and yet she played a serious role as well, that being helping Liz to rediscover herself and her life.

Island Girl by Lynda Simmons is an absolutely fantastic book! I originally wanted to read it because of the Alzheimer’s story line as this is something that has hit my own family hard. Yet as I read I found it to be so much more. Yes, it’s a look at the everyday in the life of someone with Alzheimer’s but it’s also full of family drama and love. I laughed and cried while reading this novel and for those of you who follow my reviews you know that makes this book a favorite of mine. This novel touched my heart and I will not soon forget Ruby or her girls, Grace and Liz.

Be sure to pop in tomorrow as Lynda Simmons visits Peeking Between the Pages with a guest post and a giveaway of a few copies of Island Girl! You won’t want to miss it!

My copy of Island Girl by Lynda Simmons was received for review from TLC Book Tours and the Publisher.