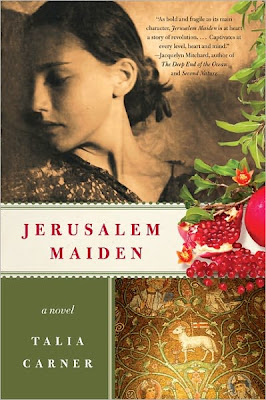 Jerusalem Maiden by Talia Carner is a beautifully told novel that had me feeling as though I was experiencing the sights and sounds of Jerusalem and later Paris through the words of the author. I love reading novels that take me away to another place, another culture, and another religion. I was somewhat familiar with some of the traditions of the Jewish religion but this novel took it to a whole other level for me and I loved that.

Esther is a young Jewish girl whose life never really meets its full potential because of the strict traditions of her religion back in the early 1900’s. In Jerusalem Maiden we follow Esther’s journey through life from a young girl to a grown woman. We experience her joys, sorrows, and struggles and throughout we learn to care about this woman who never really had a choice in life but did have faith in a God that she believed directed her every move.

As a young girl Esther had a rebellious streak that just didn’t bode well for her considering the way young girls were brought up in the Jewish tradition. Truthfully I was shocked by just how strict her life was. It’s not even that everything has to be kosher – but that you couldn’t speak to men and mostly that your life was all about getting married and having sons. For someone like Esther who had dreams that were bigger than that, this was devastating.

As Esther is at a marriageable age her father is setting about finding a suitable husband for her. Esther however does not want to get married and has absolutely no qualms about saying so. Many times her family is horrified by what comes out of her mouth because girls just didn’t have the freedom to say what they wanted; they were just supposed to do what they were told. Ultimately Esther is, in a way, tricked into a marriage to a merchant named Nathan.

Nathan is a good man. In this Esther is lucky because many woman end up in marriages where they are not treated well. Nathan truly loves Esther. It’s just too bad that Esther can’t completely reciprocate that love. Esther’s true love lies with painting and being married and having children that she hasn’t really wanted has made her feel as though life is really incomplete for her. Something is missing.

When Nathan leaves for a trip to Paris and Esther’s sister Hanna comes to stay, Esther takes this as an opportunity to go and visit Nathan while seeing the one place she’s always dreamed of going as a painter. When she arrives though, he isn’t there, having had to go on a trip elsewhere. As it is dangerous for her to travel where he is, he advises her to stay in Paris. This opens doors for Esther that she never thought possible and she is thrown into the life of a painter, meets with an old friend who may have meant more to her than he should have, and finds a life she never thought possible. What it also does though is set in motion a spiraling of events that will leave Esther’s life in a shambles.

Jerusalem Maiden by Talia Carner was a good read for me. As I said before I always enjoy traveling somewhere different and experiencing another culture. This book is at times very emotional and sad. Some have described it as a bit depressing but it isn’t in my opinion. It’s very real – real to how a girl’s life would have been as a Jerusalem Maiden. It’s a look into a life that most of us can never imagine living and for that very reason, it’s a great book to read. The writing itself is beautiful and so vivid. I really look forward to reading more from Talia Carner in the future.

I read Jerusalem Maiden by Talia Carner for her book tour with TLC Book Tours. You can see what others have thought of the novel here. Be sure to check out Talia’s website and you can find her on Facebook as well. Jerusalem Maiden can be purchased here in the US and here in Canada.

My copy of Jerusalem Maiden by Talia Carner was received for review from TLC Book Tours and the Publisher.