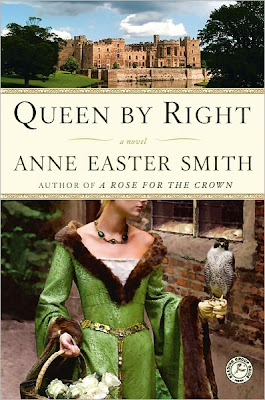 I love when historical fiction can transport me to another time and place and completely captivate me. Queen By Right by Anne Easter Smith did exactly that! This is no short novel at over 500 pages but right off the beginning I found myself totally immersed in the story and could not put it down. To me, that is exceptional historical fiction. Queen By Right is a fictional tale weaved together with lots of historical details that tells us the life story of Cecily of York, mother of two kings. It felt like the telling of a family saga to me and I absolutely loved it!

Queen By Right takes us to the mid 1400’s to a time when women really had no say in things. As a woman you were expected to obey your husband in all things and to be seen but not heard. Yet even as a young girl, Cecily, who had been indulged in greatly by her father, was known to be very outspoken and head strong. Cecily meets Richard, duke of York, when she is nine and he is thirteen. Her family takes him in as a ward and later he and Cecily are promised to each other. The unusual thing is that they were able to really grow together from young; they weren’t just thrown into a marriage. They enjoyed hunting, riding, and just talking. They truly fell in love and stayed in love their whole lives together which is something that is known in history. It’s so refreshing to read of a historical couple who had such a true and pure love that was known to be lasting.

I was so drawn to the character of Cecily. She was such a strong woman and people loved her. She was known as the Rose of Raby and Proud Cis because of her beauty and her pride – she inspired people with her kindness and regal bearing. The way the author portrays her in this novel really invites the reader into Cecily’s life and makes you care about her. Cecily’s life in no way was easy even though she and Richard loved each other so much. She lost children which were very trying times for both her and Richard. Yet she always moved forward for the good of her family and her love for her husband. While many men felt women should not offer their opinions, Richard always engaged his wife in ‘pillow talk’. He discussed with her what was going on and valued her opinions. This is probably another reason they had such a good marriage – there was a mutual respect between the two.

Then there was also all the political strife in terms of the court of Henry VI and Richard’s position there and ultimately the position that he wanted to hold there. Over the years Richard and others become less than impressed with the way that Henry VI rules his empire. He seems to be a weak king given to bouts of craziness and it appears his Queen and Council make more decisions than he does. Eventually this leads to Richard forming an army to overturn Henry VI and what follows is much tumult over the years for both Richard and Cecily. Towards the end Richard begins to make many decisions that Cecily doesn’t believe in but nevertheless she supports her husband as she has always promised to do. Her main purpose through it all was to protect and love her children.

I don’t think I can put in words just how much I enjoyed this novel and it was all in the telling of this amazing woman that I’ve learned that Cecily was. I’d never read anything about her before but I’ve come away from reading this novel with a deep respect for the woman she was. For the times that she lived in, she still comes across as a true inspiration for women of today for holding herself and her family together with pride. For me this is one of my favorite historical reads of the year. I like nothing better than to be able to learn about a time in history while also being drawn into and caring about the people being portrayed and that is exactly what Anne Easter Smith has succeeded in doing. Queen By Right would come highly recommended by me! I simply can’t wait to read more of Anne Easter Smith’s work and lucky for me I have three more of her novels waiting for me on my bookshelf!

My copy of Queen By Right by Anne Easter Smith was received for review from Historical Fiction Virtual Book Tours and the Publisher.