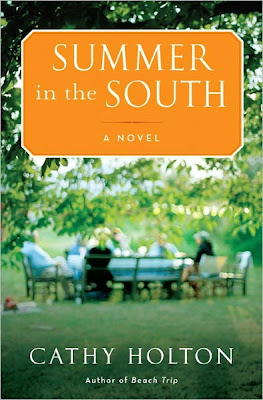 Hey everyone, join me in welcoming Cathy Holton, author of Summer in the South, to Peeking Between the Pages today! I’m really happy to have Cathy here, first because I’m very excited to read her newest novel, Summer in the South (my review will be up next Friday), but also because she’s an author that has been on my favorites list since reading Beach Trip by her (my review). Cathy joins us today with a guest post entitled The Madwoman in the Attic…

As a girl, I loved reading the novels of Daphne du Maurier. I loved the elements of mystery and passionate love in her novels, the way the dead often encroach upon the lives of the living. I loved the spectacular settings, the lonely windswept seacoast, the ancient manor house falling into a state of ruin, the prominent family tied as much to their fabled past, as to the land.

I knew when I read Du Maurier that she had read Wuthering Heights and Jane Eyre and loved them as much as I did.

So when I first began imagining Summer in the South, I knew it would have elements of the Gothic novels that I had devoured in my youth – the stranger trying to escape her own past, an old but impressive manor house, an aristocratic family struggling with the romance and tragedy of their past. And I knew it would be set in the South, because in the South we understand history and tragedy and obsessive love. We cling to our history with equal parts pride and shame. We write novels about it. We write songs about it.

There is no Madwoman in the Attic in my novel but there is a ghostly presence. Because I’ve never known an old Southern house lived in for generations by the same family that didn’t have at least one family spirit. Years ago I saw a documentary about a North Carolina family. They had once been prominent planters and their two hundred year old plantation home, complete with white columns and several acres of cultivated fields, was standing where a new Target Store was proposed. The family had fallen on hard times; there had been the usual instances of financial ruin, divorce, suicide, disintegration. But they clung to the Old Home as a symbol of who they had once been and every year they held a reunion on the grounds. Rather than allowing the house to be demolished, they used the proceeds from the Target acquisition to have the house moved several miles down the road to a farm where it was to be renovated.

For years the house had been the site of strange occurrences, lights that flickered on and off, objects that moved about the house, heavy footsteps on the stairs. It was generally credited to a ghost known as the “Old Colonel” who had been seen by generations of the family. The family wondered what would become of the Old Colonel once the house was moved. A year later they had their answer.

Several employees of the new Target reported that lights flickered on and off, usually around closing times. One employee staying late to do inventory reported that he had seen a tube of toothpaste float from one shelf to another. Another reported hearing heavy footsteps trailing her as she closed up. The Old Colonel, it appears, had stayed with the land.

Is the ghostly presence in Summer in the South real or a projection of Ava’s own emotional turmoil? Is the love story between Fanny and Charlie truly as Ava imagines it?

The answers to both questions, I suppose, lie clearly in the realm of fiction.

Thank you so much for joining us here today at Peeking Between the Pages, Cathy and for this wonderful guest post! I am so looking forward to losing myself in the pages of Summer in the South soon!
__________

For Chicago writer Ava Dabrowski, fleeing her own troubled past, the chance to spend the summer writing a novel in quiet Woodburn, Tennessee seems a welcome reprieve. A guest of Will Fraser and his great-aunts, Fanny and Josephine Woodburn, members of an aristocratic, old-moneyed family, Ava soon finds herself surrounded by an eccentric cast of characters.

But the Woodburns are not who they seem to be. Gradually hearing rumors about the mysterious death of great-aunt Fanny’’s first husband, Ava stumbles upon a decades old family secret. Putting aside her planned novel, she begins instead to write the tragic history of the Woodburns, a family with more skeletons (and ghosts) in their closets than anyone can possibly imagine.

As she writes the history of the Woodburns, Ava begins to put together the pieces of her own fractured past, learning that a good story is always more dazzling, and ultimately less painful, than the truth.

Read an excerpt
Buy Summer in the South at Amazon.com or Amazon.ca

The daughter of a college professor and an artist, Cathy Holton grew up in college towns in the American South and Midwest. As a child, she entertained her classmates with tales of a scaled creature that lived in her carport shed and a magical phone that hung in her family’’s bathroom that could be used to summon an English butler (this was in North Carolina in the 1960’’s and her family lived in married student housing).

Once, in a moment of epiphany, she overheard two neighbors discussing her.

“”That child is quite the story-teller,”” one woman said.
“”That child is the biggest liar on God’’s green earth,”” the other woman replied. “”She wouldn’’t know the truth if it fell out of the sky and clumped her on the head.””

Cathy knew then that she would be a writer.

She studied Creative Writing at Michigan State University under Professor Albert Drake. She has worked as a dude ranch hand, a university seminar coordinator, a paralegal, and an assistant in a fire investigation firm. The mother of three grown children, she lives in Chattanooga, Tennessee with her husband and a rescue dog named Yoshi. She is the author of Revenge of the Kudzu Debutantes, Secret Lives of the Kudzu Debutantes, Beach Trip, and Summer in the South, all published through Random House/Ballantine Books.

She is currently at work on her fifth novel, The Sisters Montague, about a nineteen-year old runaway who takes a job as a caregiver for a ninety-four year old Southern grande dame, a woman haunted by her own past. Think Girl, Interrupted meets Driving Miss Daisy. With a twist.

I have one copy of Summer in the South by Cathy Holton to share with my readers. To enter…

This giveaway is open to US & Canadian residents only (no PO boxes) and I will draw for the winner on Saturday, July 9/11. Good luck everyone!