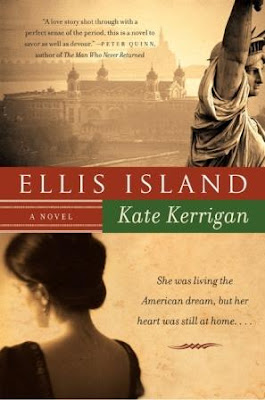 Ellis Island by Kate Kerrigan is a wonderful journey into the past of Ireland and New York in the 1920’s. I love to read books that have anything to do with Ireland and especially the Ireland of the past so this novel was perfect for me. Ellis Island is a story of love, loyalty, and of a woman who finds her way back to the love of her life.

Ellie and John are meant to be together. From kids when they first meet there is an immediate connection and they remain sweet on each other throughout. John and his family are the first people to show Ellie any affection. While she doesn’t come from an abusive home, she also doesn’t come from a home where love is shown freely. As expected, when they are old enough they run off and get married and attempt to make a life. In the 1920’s though, times are tough in Ireland and they aren’t fairing too well. There is no money and no food and it’s becoming harder and harder to survive. Then the unthinkable happens and John is seriously injured as a soldier for the Irish Republican Army.

So with no other options and refusing charity from John’s parents, Ellie, upon hearing from an old school friend in New York, decides to sail across the ocean to New York and work for a year there as a maid for a wealthy socialite. Once she arrives there she is overwhelmed by how different things are compared to Ireland. All of a sudden she finds herself in a world full of wealthy people, parties, and beautiful clothes. The lady she works for, Isobel, can be very trying at times so when Ellie has a chance to take a secretarial course and get a job, she jumps at it and succeeds. All of a sudden not one year has gone by, but two and she is still not home to Ireland and worse yet, she doesn’t know if she wants to go back. However, tragedy strikes back home and the decision to return is taken away from her – she has no choice but to go home to Ireland.

Ellie struggles upon her return to Ireland. Along with all the beautiful things America has to offer there is also the added allure of all the conveniences of America. Electricity, toilets, showers, and even soft sheets to curl up in at bedtime don’t exist in the cottage of Ellie and John, and Ellie desperately misses these things. Even more she keeps thinking of Charles, the man she met in New York, who wanted to marry her. She just doesn’t feel as though she has a life in Ireland anymore – she doesn’t fit in, not that she ever did. Yet, her loyalty is to John and after seeing him she hates to even think of breaking his heart and she does love him. So instead of dwelling on what she can’t do she decides to think of what she can do and opens up a shop that carries things that she had in New York along with all the normal things her people need. Ultimately Ellie has to find it within herself to find happiness in what she does have which is a love that many don’t experience in a lifetime.

Ellis Island by Kate Kerrigan was a good read for me. I really enjoyed the trip back in time and the differences in lifestyles between Ireland and New York. I read Ellis Island by Kate Kerrigan for her book tour with TLC Book Tours. You can stop by these other tour stops to see what their thoughts on the book were. You can pop by and visit Kate’s website or find her on Twitter as well! Your own copy of Ellis Island can be purchased here in the US and here in Canada.

My copy of Ellis Island by Kate Kerrigan was received for review from TLC Book Tours and HarperCollins.