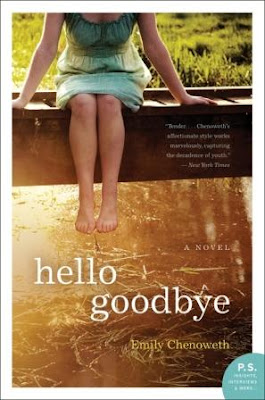 Hello Goodbye by Emily Chenoweth is an emotional look into the lives of a family faced with losing a beloved family member to illness. It takes a look into the real life feelings of how the person dealing with the illness feels to all the people around them that are dealing with the ups and downs of watching a person they love experience all the downfalls of disease.

Helen has always been a woman on the go. She has taken care of her family and done her job and loved every minute of it. So when she starts experiencing headaches and funny vision she puts it down to needing her eyes checked. Then, after a jog one day, she finds herself experiencing some piercing pain and then – nothing. After almost dying and numerous tests, it is determined that Helen has inoperable brain cancer and doesn’t have long to live. This is something that her husband Elliott chooses to keep from her – better she have hope as it will keep her going longer. He chooses though not to tell his daughter Abby, who is in college, right away either in the hopes of keeping her away from the pain of it all as long as he can.
Elliott decides that it would be nice to celebrate their 20th wedding anniversary by taking the family to a historic resort hotel called The Presidential Hotel. He knows in his heart that it will likely be the last vacation they all spend together so he wants it to be special for Helen. He invites their closest friends and arranges for a lavish dinner and dance. The hotel itself is very old fashioned to Abby and she knows she’s going to be bored silly, but still there are some young people working on the staff that catch her eye. There is also a boy who used to be one of his mother’s wayward boys that she was trying to help that is working at the hotel. Just maybe Abby still holds a bit of a torch for him.
Helen is a great character and I wish the book had centered more on her thoughts and feelings than on everyone else’s around her. I admired her for trying to keep a positive outlook and still want to participate in walks and dinners. I loved the parts where Abby would be helping her mother dress or do her make-up. It was so heartbreakingly real. You could feel Abby’s confusion and grief through the words and you could easily put yourself in her shoes and feel her pain. The pain of seeing someone you love become someone else and the slow but sure progression of losing them entirely. I recognized in myself the way Abby would bargain with God and everything else that her mother would be ok. You know things like – if I can throw this rock and it reaches that sidewalk, then she’ll be ok – those kinds of things. I did them over and over when Buddy was sick. I think in your heart you know it won’t help but maybe it helps keep some of the anxiousness at bay. In those feelings of helplessness I really related to Abby’s feelings.
It’s hard to say I enjoyed this novel because of the sad subject matter but I did. There were times in the novel where I found it slow – when it centered too much on their friends and the party. As I said before I would have rathered have had more of the focus on Helen and her family. Yet I like to read books that deal with raw emotions; that can draw an emotional response from me. At times Abby drove me crazy as I thought her a bit selfish but then I realized this was how she was dealing with her grief and the fact that she really didn’t know what the outcome was going to be. Elliott, I thought, was a great husband and Helen was lucky to have him. He catered to her and took care of her and knew that he was going to miss her more than anything eventually. This very beautifully written novel takes you on this family’s journey through the uncertainty that is illness.
I read Hello Goodbye by Emily Chenoweth for her book tour with TLC Book Tours. You can see what others thought of the novel here and Emily can be found on Facebook as well. Hello Goodbye can be purchased here in the US and here in Canada.

My copy of Hello Goodbye by Emily Chenoweth was received for review from TLC Book Tours and the Publisher.
Share this post!