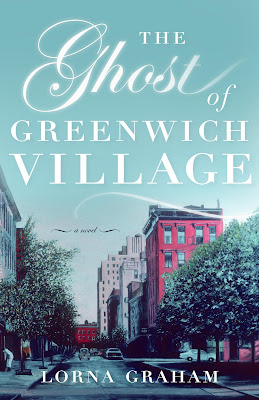 The Ghost of Greenwich Village is the debut novel of Lorna Graham and it is a sweet and charming read and I really enjoyed it! Seriously if I was in the bookstore I would pick this book up based on the title alone and would have bought it on the description. I can’t resist books that have ghosties in them and Lorna Graham has whipped up a great tale about a woman trying to find her way and the ghost who helps her.

Eve Weldon moves to Greenwich Village as a way to feel closer to her mother who had lived there during the sixties and who had passed away when she was a young girl. Eve’s father wants her to become a lawyer but Eve’s real dream is to be a writer and where better to achieve that goal than Greenwich Village. Unfortunately for Eve she doesn’t meet too many writers upon arriving but she does happen to move into an apartment that she gets for a steal which is a most unusual thing to happen in New York. Once again, unfortunately for Eve the reason she gets this apartment so cheap is because it comes with a ghost.

Donald, a writer who died before his time in the seventies at the age of forty-three is Eve’s in house ghost – he had once lived in Eve’s apartment. He’s not the type of ghost to hover around though, he’s the type of ghost who takes up residence in a person’s brain and talks to them in there. At first Eve thought she was going crazy but once she got used to the idea, they actually got a long for the most part. Donald is a pretty cantankerous ghost and can get quite unmanageable at times but Eve is intrigued by him. Eve is an old soul – she loves things from times past so when Donald wants her to write his stories for him, she agrees. The problem is that they don’t seem to be all that interesting. She tries to steer Donald towards a memoir but as I said Donald can be pretty uncooperative.

Eve’s biggest problem is finding a job. While her apartment may be cheaper than most, it’s still not free. Finally she gets a job writing segments for a morning news show. It’s not her dream job but it’s a paycheck. For some reason though Eve keeps screwing things up and well a job doesn’t last too long when that happens. The good thing that came of the job though was some of the people she got to meet, one being meeting the legendary fashion designer Matthias Klieg who she admires greatly and that her mother had loved. He’s apparently a solitary old man now but Eve manages to wear him down and they become friends, both finding something in each other that they need.

Eve spends her time juggling a job, job hunting, and trying to make friends while keeping her ghost reasonably happy. In the meantime she keeps learning more and more about her friend Matthais Klieg and his past and it turns out it has some interesting connections to where Eve is in the present. As Eve delves into trying to find out more about Donald she also stumbles into information that leads her to learn more about her own mother. The people she meets and the things she learns all lead her to find out more about who she is as well and what she wants out of her life.

I thought Eve was a great character. I felt a connection with her right from the beginning of the story and I think that always helps a person to enjoy a book. She was a character with a heart who truly cared about people and I also loved her puppy Highball. Highball is her first puppy and there are some pretty cute scenes with the dog and we all know how much I love dogs! As for other characters in the story another one I really liked was Matthais Klieg. He was an older man already who had thought, because of past mistakes he had made that there was no moving forward and yet he opened himself up to Eve and found that there was still a life to be had.

This was another novel that I started late Saturday, stayed up late reading and zipped through the rest on Sunday. I love when a book captures my attention like that and keeps me reading and more importantly makes me not want to put it down. I really look forward to more from Lorna Graham. I’d certainly be sure to read it!

I have one copy of The Ghost of Greenwich Village by Lorna Graham to share with my readers. To enter…

This giveaway is open to US and Canadian residents only (no PO boxes) and I will draw for a winner on Saturday, August 6/11. Good luck everyone!

My copy of The Ghost of Greenwich Village by Lorna Graham was received by TLC Book Tours and the Publisher.