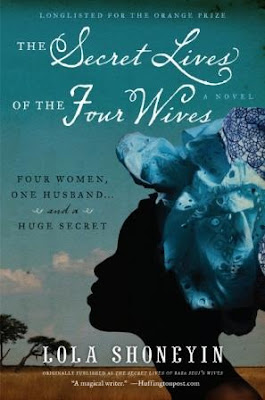 The Secret Lives of the Four Wives by Lola Shoneyin is a novel that takes you into the lives of a family in Nigeria living a polygamist lifestyle. I really enjoy a novel that takes me to a different place and way of life and The Secret Lives of the Four Wives most definitely fit the bill. This is a novel full of secrets, lies, and jealousies and how all three of these can work to destroy a life so carefully constructed.

This novel takes place in Nigeria and focuses on Baba Segi’s four wives. His first wife Iya Segi is a very domineering and frankly, quite scary sounding woman. Being the first wife she pretty much rules the way things go for the other wives as well and will do anything to make sure she stays the top wife. Then there is Iya Tope who I guess could be best described as the timid, quiet one. She is scared of everything and especially terrified of Iya Segi. The third wife is Iya Femi who is the princess of them I would say. She loves to dress nice and have her makeup done and she’s also not one to give up her position of the latest and newest wife.

Into all this comes Bolanle, a woman anxious to leave her past behind and move on in the world. Baba Segi can offer her all she needs – clothes, money and for the most part the freedom to do as she wants. Different from the other wives in that she’s educated; she is not received well in the home. As well, Bolanle is the one wife that Baba Segi chose himself – the others were given to him in payment or they gave themselves as Iya Femi had. The other wives, especially Iya Segi and Iya Femi are enraged and determined to get rid of this fourth and newest wife in their home.

Time passes and Baba Segi becomes impatient with Bolanle because she has still not given him any children. Baba Segi is the type of man who puts a lot of importance on the children he is given and therefore those wives are looked upon in a more favorable light. He’s angry that the one woman he picked for himself and that has been his favorite can’t seem to give him a child. He is troubled enough to take Bolanle to a hospital to find out what is wrong with her.

The wives of course are overjoyed that Bolanle isn’t the apple of Baba Segi’s life anymore. They scheme and plot to get rid of her in some pretty horrifying ways. The biggest problem is that all of their efforts end up backfiring on them and the secret that they’ve all been hiding for years is exposed. All this because they couldn’t see themselves letting this new wife into their lives and the worst thing is they could have really learned a lot from her. Instead they let their jealousy and hatred destroy everything.

By far my favorite character was Bolanle. I can’t say I really connected with her because I’m not familiar with life in her country but I liked her. Despite all that she took from the wives she still kept her composure and calmness. Baba Segi horrified me and yet I’ve read about much worse husbands. His women at least had everything they could want but the fact remains they were still under his thumb. The other wives I felt no connection to at all but Iya Segi, the first wife, amazed me with the lengths she would go to in order to keep her house the way she wanted. So, to wrap up I did like the book. I wouldn’t say I necessarily loved it but it kept my attention throughout and the pages passed quickly. It was a good read for me.

My copy of The Secret Lives of the Four Wives by Lola Shoneyin was received for review from TLC Book Tours and the Publisher.