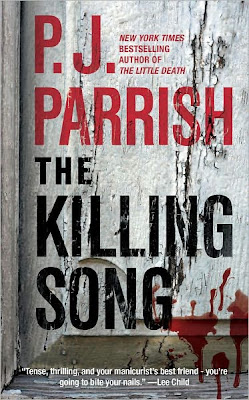 I’ve got a great feature to share with you today – The Killing Song by P.J. Parrish! And something I didn’t know before but P.J. Parrish is actually two sisters – Kristy Montee and Kelly Nichols. They took their talent and lifelong love of writing and began writing books. They’ve got several best selling novels including: An Unquiet Grave, A Killing Rain, Island of Bones, Thicker Than Water, Paint it Black, Dead of Winter, and Dark of the Moon.

The Killing Song is a thrilling standalone novel, where Miami journalist Matt Owens chases down his sister’s murderer on a European adventure readers will never forget. Here’s a bit about the book…

On the surface, Matt Owens is at the top of his game. He’s a dedicated police beat reporter at the Miami Herald with a Pulitzer Prize nomination on his resume, but he’s plagued with a nagging doubt that at 35, he has never really finished anything in his life, never really pushed himself to take the hard road, be it a relationship or that half-finished novel in his drawer. The only thing he truly loves is his 20-year old sister Amanda, who idolizes her free-spirited older brother. So when Mandy comes to visit Jack and is viciously murdered on the dingy edge of Miami Beach’s art deco district, Matt wants nothing more than to find the bastard who did it to her. As he uncovers clues to her murder through an iPod left by Amanda’s corpse, he’s led farther and farther from home. When he finally hits a dead end on the dangerous streets of Paris, he has no choice but to enlist the help of sexy Parisian detective Eve Bellamont, whose obsession with a cold case may help Matt bring a killer to justice.

Read an excerpt of The Killing Song

Check out the Trailer… 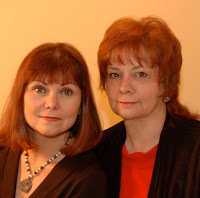 P.J. Parrish is the New York Times bestselling author of ten Louis Kincaid and Joe Frye thrillers. The author is actually two sisters, Kristy Montee and Kelly Nichols. Their books have appeared on both the New York Times and USA Today best seller lists. The series has garnered 11 major crime-fiction awards, and an Edgar® nomination. Parrish has won two Shamus awards, one Anthony and one International Thriller competition. Her books have been published throughout Europe and Asia.

Parrish’s short stories have also appeared in many anthologies, including two published by Mystery Writers of America, edited by Harlan Coben and the late Stuart Kaminsky. Their stories have also appeared in Akashic Books acclaimed Detroit Noir, and in Ellery Queen Magazine. Most recently, they contributed an essay to a special edition of Edgar Allan Poe’s works edited by Michael Connelly.

Before turning to writing full time, Kristy Montee was a newspaper editor and dance critic for the Sun-Sentinel in Fort Lauderdale. Nichols previously was a blackjack dealer and then a human resources specialist in the casino industry. Montee lives in Fort Lauderdale and Nichols resides in Houghton Lake, Michigan.

The sisters were writers as kids, albeit with different styles: Kelly’s first attempt at fiction at age 11 was titled The Kill. Kristy’s at 13 was The Cat Who Understood. Not much has changed: Kelly now tends to handle the gory stuff and Kristy the character development. But the collaboration is a smooth one, thanks to lots of ego suppression, good wine, and marathon phone calls via Skype.

The first ten books in the series, in order, are: Dark of the Moon, Dead of Winter, Paint it Black, Thicker than Water, Island of Bones, A Killing Rain, An Unquiet Grave, A Thousand Bones, South of Hell and The Little Death.

I have 5 copies of The Killing Song by P.J. Parrish to share with my readers! To enter…

This giveaway is open to US residents only (no PO boxes) as the books are being supplied by the publisher. I will draw for the winners on Saturday, August 20/11. Good luck to you all!