Happy Saturday everyone! Today I’m going to feature author Barbara Freethy along with the books in her Angel’s Bay series! I haven’t had the pleasure of reading this series yet but it’s just a matter of time until I do. And yet again, here are more books with covers that really make me want to get away to these places! I hope you’ll enjoy the book spotlights and be sure to check out the giveaway at the end of the post! It’s a good one!

For fans of Debbie Macomber books because of her heart-warming novels like her Blossom Street Series! Well, u are in for a treat! If you are a fan of Debbie Macomber, you will love this heart-tugging contemporary romance Angel Bay series by USA Today Bestselling Author Barbara Freethy.

Barbara Freethy enchants readers over and over again in this emotional and compelling series of family secrets, abiding friendship and heart-touching romance.

So, what are you waiting for! Get started on the series and become a fan of Barbara Freethy on Facebook to let her know what you think and ask her any questions about the series!

Suddenly One Summer by Barbara Freethy 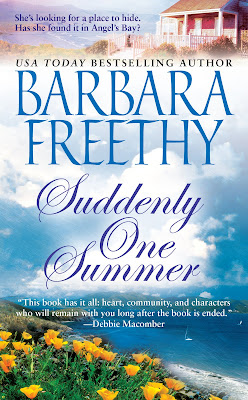 In the California coastal town of Angel’s Bay, an old legend says that sometimes, when they’re needed, angels from an old shipwreck appear and good triumphs over evil. Award-winning, bestselling author Barbara Freethy enchants with the first book in a series that will capture your heart.

Jenna Davies flees to the close-knit community of Angel’s Bay with a seven-year-old child, a dangerous secret, and a heart full of pain. She wants nothing more than to live a quiet life, but when she sees a teenager plunge off the pier, she doesn’t hesitate to dive in after her. But saving the desperate girl’s life thrusts Jenna into a spotlight she can ill afford. Suddenly everyone in town wants to know her story — a story that could cost her life.

Reid Tanner was a tough reporter until a shattering incident changed everything. Now all of his instincts are on alert. Who is Jenna, and what is she hiding? He wants answers, but his quest for the truth could put them all in danger. They say love is a miracle — but can it keep Jenna safe in his arms?

On Shadow Beach by Barbara Freethy 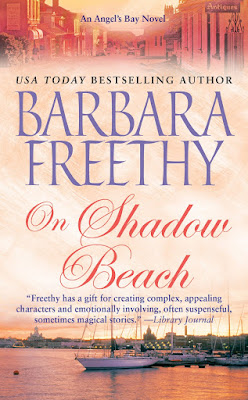 The California town of Angel’s Bay has had its share of troubles: from the long-unsolved murder of a teenage girl to the young police officer recently left in a coma after being shot. But miracles also have a way of happening . . . as if angels really do keep a watchful eye there. In this touching and suspenseful novel, bestselling author Barbara Freethy returns to the setting of her acclaimed Suddenly One Summer.

Lauren Jamison hasn’t been back to Angel’s Bay since she was a teenager . . . when her sister Abby was murdered and Lauren’s boyfriend, Shane Murray, was accused of the crime. When Lauren reluctantly returns home to assist her ailing father, the old attraction again flares between Lauren and Shane. But the terrible days after Abby’s murder still stand between them, as well as the secrets Shane has yet to unveil. Finding the truth could bring closure . . . but at a cost. For there are people who don’t want old mysteries brought to light—people whose fear makes them very dangerous.

In Shelter Cove by Barbara Freethy 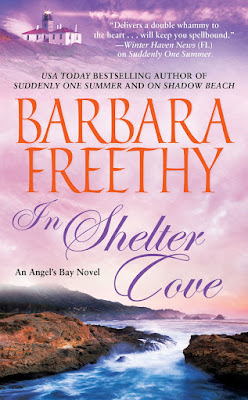 A long-ago shipwreck off the California coast led the survivors to the haven they named Angel’s Bay. Their shared adversity brought fellowship and joy . . . but also unsuspected secrets. Acclaimed author Barbara Freethy returns to the town where angels still keep watch, with a compelling story of a young widow trying to find the truth and bring closure for her son and herself.

The theft of three priceless paintings sent Derek Kane to prison and destroyed the dreams of his wife, Brianna. When Derek unexpectedly dies just weeks before his release, Brianna returns to Angel’s Bay with her young son, determined to prove her husband’s innocence and find the missing paintings. Her efforts are stymied by Jason Marlow, the police officer who sent Derek to jail— betraying his former friend. And when unexpected passion flares between Brianna and Jason, she must choose between the past and the present, the guilty and the innocent, the truth and the lies. For nothing is what it seems. . . .

At Hidden Falls by Barbara Freethy 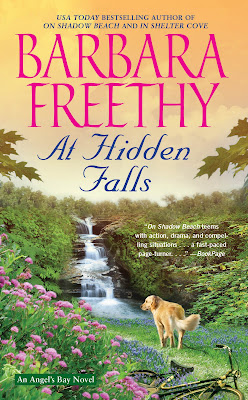 Isabella’s drive to Angel’s Bay would have ended in tragedy when her car slid off a cliff if she hadn’t been rescued by Nick Hartley. As he helps her to safety, she realizes he is the man who has haunted her dreams. Nick, however, is committed to reconnecting with his estranged teenage daughter, refusing to respond to his powerful attraction to Isabella. And Isabella’s police chief brother has his hands full with a missing mother, an abandoned baby, and an unknown father. What is Isabella’s role in the mysteries—both past and present— that swirl around the town?

When she starts helping at the Hartley family theater, all the pieces begin to link together. Loves found and lost, heartbreak and happiness, courage and betrayal are all part of the patchwork quilt of the community—and of life. Isabella’s gift is seeing the patterns. . . .

…And preorder your copy of Garden of Secrets by Barbara Freethy, the 5th book in the series on sale September 20/11 here. 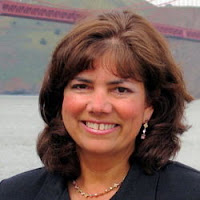 I’ve been making up stories most of my life. Growing up in a neighborhood with only boys and a big brother who was usually trying to ditch me, I spent a lot of time reading. When I wasn’t reading, I was imagining my own books. After college and several years in the P.R. field, I decided to try my hand at a novel. I was pregnant at the time, and I think there must have been something in those pregnancy hormones. Two years after that decision, I had a finished book and a contract with Silhouette Romance. (Okay, I’ve glossed over the hair-pulling struggle of actually writing that first book, but all the pain vanished when I got the “call”.)

I wrote several books for Silhouette under a pen name, Kristina Logan, and then moved on to single title romance, writing books for Avon and NAL and most recently for Pocket Books where I’ve launched my Angel’s Bay Series. It’s the first time I’ve written a series of connected books, and while it’s quite a challenge, I love being able to develop continuing characters and storylines and create an entire town complete with a rich and fascinating history. Book one, SUDDENLY ONE SUMMER came out last summer and this spring, ON SHADOW BEACH (April) and IN SHELTER COVE (May) will be released. A fourth book will be out in early 2011. IN SHELTER COVE will bring my total of published books to 27.

As you can imagine, it’s taken me a few years to write that many books. I no longer have babies or little kids running around, but I continue to have the support of my family as I live the crazy life of a writer, one foot in the real world, the other in the world of my imagination.

I first got my love of reading from my mother, who was an avid reader and filled our home with overflowing shelves of books. She was also the one who first came up with the idea of writing a romance and completed her first novel a few years before me. When I first started writing, we traveled to writers’ conferences together and learned the craft, but mostly we just had a lot of fun. It was wonderful to have her support and encouragement. She was in the audience when I won the RITA for Daniel’s Gift, and I don’t think I’ll ever forget the expression on her face. While, she never fulfilled her own publishing dreams, she kept on writing, as much for the joy of it as anything. And some days when the writing seems “hard” or when the ever changing publishing business takes another spin, I think of her and remember that it’s always about the story. And the next best thing to reading is writing.

I hope to continue on for many more books, because the ideas just keep coming. When I’m not writing, I’m enjoying my family and the usually good California weather. A native Californian, I’ve lived at both ends of the state, and while I sometimes miss the hot summer nights of Southern California, I love the beautiful bays and hillsides of Northern California and the intriguing city of San Francisco, one of my favorite settings.

I have 1 copy of Suddenly One Summer, 1 copy of On Shadow Beach, 1 copy of In Shelter Cove and 1 copy of At Hidden Falls by Barbara Freethy up for grabs to ONE lucky winner! To enter…

This giveaway is open to US residents only (no PO boxes) as this is being shipped by the publisher. I will draw for the winner on Saturday, August 13/11. Good luck to you all!