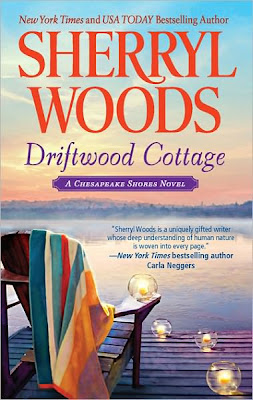 I’m pleased to have Sherryl Woods, author of Driftwood Cottage, here at Peeking Between the Pages today. I have to mention how much I love the cover on this book – it really makes me wish I wish sitting in that chair staring out at the water. Driftwood Cottage is part of the Chesapeake Shores series and this is one series I’d like to get into. My mom adores Sherryl Woods and has decided this is the next series of hers that she just has to try. I’ve always been a sucker for a series – to me they are homey and comforting – something to relax with a cup of coffee and a comfy chair. Let’s enjoy this guest post from Sherryl Woods on her inspiration for Driftwood Cottage…

When I created the Chesapeake Shores series several years ago, my goal was to write about a large, complex family — the O’Briens — comprised of several generations. At the core of the family was Mick O’Brien along with his five adult children. I wanted to write about the impact that Mick’s divorce and subsequent reconciliation with Megan would have on each of their sons and daughters.

I’ve heard it said that every child in every family has his or her own reality within that very same family. I wanted to explore those dynamics.

In Driftwood Cottage, the focus is on Connor, the younger of their two sons, who was deeply embittered by the divorce. Not only has it impacted his personal view of marriage, but it has driven his career choice. He’s become a powerful divorce attorney, generally on the side of husbands.

This jaded view of relationships has cost him the woman he loves, the mother of his son. Even after Heather has left his home, Connor is unwilling to make the commitment that will bring her back into his life, until a pivotal moment in the story shows him what his life would be if he lost her forever.

Readers often want to shake sense into some of my characters, never more so than with Connor. It seems to me, though, that in this day and age of quick divorces, too often people don’t think about the impact the breakup of a marriage will have on their children. Couples are often too lost in their own misery, anger or bitterness to see that kids absorb all these emotions and carry them into adulthood. Perhaps, in its way, Driftwood Cottage is a cautionary tale that will remind readers of that.

At its core, though, I hope Driftwood Cottage will remind readers that love can triumph over even the heaviest baggage from the past.

New York Times bestselling author Sherryl Woods continues to bring her signature heartwarming style to the community of Chesapeake Shores. Driftwood Cottage is the story of single mom Heather Donovan, who is welcomed to the Chesapeake Shores by the boisterous, loving O’Brien clan. But Heather accepting their support seems to further alienate her son’s father, Connor O’Brien, whose career as a high-powered divorce attorney has left him jaded about marriage.

Heather’s just about given up on her old dreams of love and especially of Driftwood Cottage, the home she secretly wishes were hers. It’s going to take a lot of persuasion—and some help from the O’Brien family—to make Heather believe that some dreams are worth fighting for. 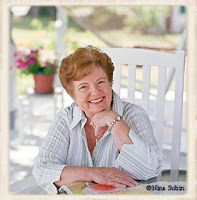 I have one copy of Driftwood Cottage by Sherryl Woods to share with my readers. To enter…

This giveaway is open to US & Canadian residents only (no PO boxes) and I will draw for the winner on Saturday, August 13/11. Good luck everyone!