Good day everyone! I am just tickled to have both Kim Wright, author of Love in Mid Air and Sarah Pekkanen, author of Skipping a Beat, at Peeking Between the Pages today. Now I have unfortunately not had the opportunity to read Sarah’s novel yet but have heard it’s amazing but I have read Kim’s and I loved it! Today I have an author-on-author interview between Sarah and Kim for all of you. So sit back and relax as Sarah and Kim discuss the themes of their books…

In terms of background, Sarah and I “met” on line and have never sat down face to face. A lot of writers complain about having to market their own work – which is an undisputable part of the job these days – but the upside of all this self-promotion is that it brings you in contact with other writers. And that’s been a huge blessing for me.

KIM: It seems like Skipping a Beat and Love in Mid Air have a certain theme in common – that no one completely knows anyone else, not even married couples or people who have been friends since high school. Julia and Michael, your lead characters in Skipping a Beat, have such a huge shared history but yet, as the book unfolds, we see they also have a lot of secrets from each other. Why did you choose to write about this? Do you think a certain level of disconnect is inevitable, even between people who love each other?

SARAH: Even in good marriages and relationships, there are times when partners can grow distant and a lack of communication can eventually create a chasm that’s impossible to cross. So I knew I wanted to open Skipping a Beat with my couple thrust into a crisis and have them look back at moments both big and small that shaped their relationship. Then they could decide if they wanted to move together forward or alone.

What was interesting to me in Love in Mid Air is that, just as in my book, the women were more dissatisfied with their marriages than the men. Do you think that’s because women are conditioned to be more in touch with their feelings? Or do you think the husbands were also unhappy but more willing to endure the situation because they were afraid of changing?

KIM: Both those things are true – women are all about feelings and men hate change. But women are more alert to shifts in a marriage for another reason as well. Almost from birth, we’re told we’re the custodians of the relationships. If the marriage fails, it’s our fault. We didn’t do our job. Look at the cover of women’s magazines – they always have articles with titles like “Ten Ways to Make Him Happy in Bed” or “The Deep Fear Men Won’t Share.” Women spend an enormous amount of energy trying to understand men and make them happy. So if a marriage falls apart, the woman not only feels the sad ker-plunk in the bottom of her stomach that anyone feels when a relationships ends, but she also feels an additional sense of failure. Like if she’d just worked a little harder, she could have changed the course of history.

I recently read somewhere that morality was a gift – that without our knowledge that we would someday die, we’d never develop an appreciation for everyday life. How does Michael’s near-death experience change his priorities, and thus, in turn, cause Julia to question her own?

SARAH: I agree that mortality is a gift, but it’s a tricky one because of the fear it inspires in us as well…. It’s a cliché, but I’ve often heard that no one wishes on their deathbed that they’d spent more time at the office. Julia viewed Michael’s company almost as a mistress – she was cheated out of a real marriage because he was so devoted to his work. But Julia was complicit in this too, because she overvalued the opulent lifestyle that Michael’s company provided. They both needed a huge jolt to recognize what was important in life, and Michael’s cardiac arrest provided it.

You opened Love in Mid Air with a crisis too, which is Elyse meeting Gerry on the plane and feeling this overwhelming attraction. Enough that she’s willing to risk her marriage.

KIM: Elyse also feels a sense of time running out. She’s turning forty and suddenly wondering if “good enough” really is “good enough.” It sounds funny now that I say it like this, but turning forty is sort of like her near-death experience! But in both cases, when our characters get this jolt that tells them time isn’t forever, they make a rather drastic decision. I guess we need these moments where life just reaches out and grabs us and gives us a big shake. Otherwise, we’d just doze along in the trance of everyday life.

SARAH: And what would people write about?

Ladies, thank you so much for this terrific interview between the two of you and for being here at Peeking Between the Pages!
__________

About Love in Mid Air by Kim Wright (from Fantastic Fiction) 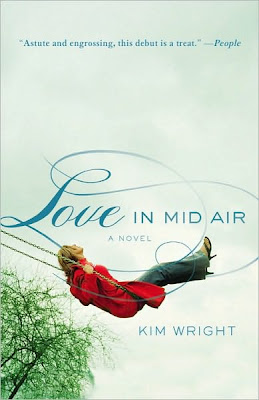 A chance encounter with a stranger in an airplane sends Elyse Bearden into an emotional tailspin. Suddenly, Elyse is willing to risk everything: her safe but stale marriage, her seemingly perfect life in an affluent Southern suburb, and her position in the church. As Elyse embarks on a risky affair, her longtime friend Kelly and the other women in their book club begin to question their own decisions about love, sex, marriage, and freedom. In the end it will take an extraordinary leap of faith for Elyse to find–and follow–her own path to happiness.

About Skipping a Beat by Sarah Pekkanen (from Fantastic Fiction) 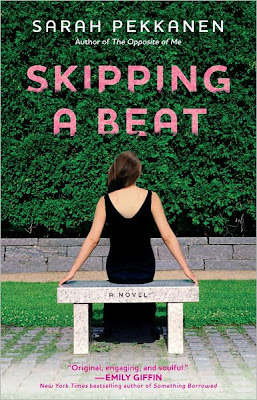 From the author of the acclaimed The Opposite of Me, a poignant, witty novel about marriage, forgiveness, and the choices that give shape – and limits – to our lives.

What would you do if your husband suddenly wanted to rewrite all of the rules of your relationship? This is the question at the heart of Skipping a Beat, Pekkanen’s thought-provoking second book.

From the outside, Julia and Michael seem to have it all. Both products of difficult childhoods in rural West Virginia – where they were simply Julie and Mike – they become high school sweethearts and fall in love. Shortly after graduation, they flee their small town to start afresh. Now thirty-somethings, they are living a rarified life in their multi-million-dollar, Washington D.C. home. Julia is a highly sought-after party planner, while Michael has just sold his wildly successful flavored water company for $70 million.

But one day, Michael collapses in his office. Four minutes and eight seconds after his cardiac arrest, a portable defibrillator jump-starts his heart. But in those lost minutes he becomes a different man. Money is meaningless to him – and he wants to give it all away. Julia, who sees bits of her life reflected in scenes from the world’s great operas, is now facing with a choice she never anticipated. Should she should walk away from the man she once adored – but who truthfully became a stranger to her long before this pronouncement – or give in to her husband’s pleas for a second chance and a promise of a poorer but happier life?

As wry and engaging as her debut, but with quiet depth and newfound maturity, Skipping a Beat is an unforgettable portrait of a marriage whose glamorous surface belies the complications and betrayals beneath. 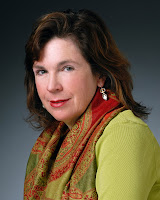 Kim Wright has been writing about travel, food, and wine for more than 25 years and is a two-time recipient of the Lowell Thomas Award for Travel Writing. Love in Mid Air is her first novel and she is presently at work on a mystery about Jack the Ripper.

About Sarah Pekkanen (from Amazon.com)

Sarah Pekkanen’s debut novel, The Opposite of Me, has been endorsed by #1 New York Times bestselling author Jennifer Weiner, who hailed it as, “Fresh and funny and satisfying. A terrific book about sisters that actually made me laugh out loud.”

Sarah is the mother of three young boys, which explains why she wrote part of her novel at Chuck E. Cheese. Seriously. Sarah penned her first book, Miscellaneous Tales and Poems, at the age of 10. When publishers failed to jump upon this literary masterpiece (hey, all the poems rhymed!) Sarah followed up by sending them a sternly-worded letter on Raggedy Ann stationery. Sarah still has that letter, and carries it to New York every time she has meetings with her publisher, as a reminder that dreams do come true. At least some dreams – Brad Pitt has yet to show up on her doorstep wearing nothing but a toolbelt and asking if she needs anything fixed. So maybe it’s only G-rated dreams that come true. Other tidbits about Sarah: She was once rejected as a contestant on “Wheel of Fortune.” She wrote an article for People magazine on a parrot psychologist. In college, she worked as a model and as an extra on the set of Hollywood movies. Oh, and she has a website (www.sarahpekkanen.com) where she holds monthly drawings for Godiva chocolates and books for her newsletter subscribers. She’d love it if you’d stop by and say hi sometime!

I have one copy of Love in Mid Air by Kim Wright and one copy of Skipping a Beat by Sarah Pekkanen to share with one of my lucky readers. To enter…

This giveaway will be open to US & Canadian residents only (no PO boxes) and I will draw for a winner on Saturday, August 6/11. Good luck everyone!