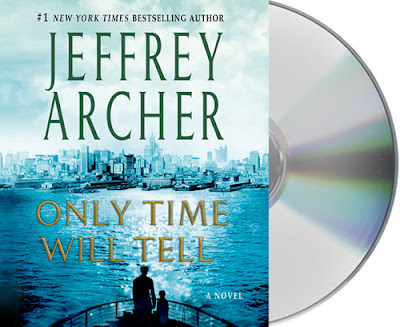 Look who’s back to Peeking Between the Pages – Jeffrey Archer with his newest novel Only Time Will Tell which releases on August 30, 2011 but this time with an audiobook and I know how much a lot of you love your audiobooks! I still haven’t had the chance to get to reading my copy but I bet this would be a fantastic book on audio. I do like audios especially in the car and I always listen to them at night when I go to sleep – it’s very relaxing.

About Only Time Will Tell by Jeffrey Archer (from Macmillan Audio)

From the internationally bestselling author ofKane and Abel and A Prisoner of Birth comes Only Time Will Tell, the first in an ambitious new series that tells the story of one family across generations, across oceans, from heartbreak to triumph.

The epic tale of Harry Clifton’s life begins in 1920, with the words “I was told that my father was killed in the war.” A dock worker in Bristol, Harry never knew his father, but he learns about life on the docks from his uncle, who expects Harry to join him at the shipyard once he’s left school. But then an unexpected gift wins him a scholarship to an exclusive boys’ school, and his life will never be the same again.

As he enters into adulthood, Harry finally learns how his father really died, but the awful truth only leads him to question, was he even his father? Is he the son of Arthur Clifton, a stevedore who spent his whole life on the docks, or the firstborn son of a scion of West Country society, whose family owns a shipping line?

This introductory novel in Archer’s ambitious series The Clifton Chronicles includes a cast of colorful characters and takes us from the ravages of the Great War to the outbreak of the Second World War, when Harry must decide whether to take up a place at Oxford or join the navy and go to war with Hitler’s Germany. From the docks of working-class England to the bustling streets of 1940 New York City, Only Time Will Tell takes readers on a journey through to future volumes, which will bring to life one hundred years of recent history to reveal a family story that neither the reader nor Harry Clifton himself could ever have imagined.

Listen to an excerpt

Buy the audiobook at Amazon.com or Amazon.ca

Jeffrey Archer was educated at Oxford University. He has served five years in Britain’s House of Commons and fourteen years in the House of Lords. All of his novels and short story collections–including And Thereby Hangs a Tale, Kane and Abel, Paths of Glory and False Impression–have been international bestselling books. Archer is married with two sons and lives in London and Cambridge.

I have one audiobook copy of Only Time Will Tell by Jeffrey Archer to share with my readers courtesy of the folks at Macmillan Audio. To enter…

This giveaway is open to US & Canadian residents only (no PO boxes) and I will draw for the winner on Saturday, September 10/11. Good luck to all!