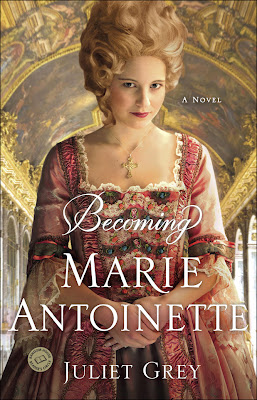 I have been very pleased lately with the historical fiction I’ve been lucky enough to read and enjoy and Becoming Mare Antoinette by Juliet Grey is another one to make my favorites list! Even better it is the beginning of a trilogy and I’ll be anxiously waiting for the next installment. I hadn’t known a lot about Marie Antoinette before reading this novel and Juliet Grey has such a way with weaving fact and fiction that I came away with a multitude of knowledge along with having enjoyed a good story! It doesn’t get any better than that in my world!

Maria Antonia is just ten years old when she learns she is to be married to the Dauphin of France, Louis Auguste who is the grandson of King Louis XV. Up until this point Maria Antonia has led a pretty spoiled lifestyle although neither she nor her siblings receive much in the way of affection from their mother. Now Maria Antonia has always thought she was pretty but she soon learns that there is a whole list of things that are apparently wrong with her that prevent her from becoming the Dauphine of France and they need to be remedied immediately for this political alliance to take place.

So begins Maria Antonia’s transformation so she can one day become the Dauphine of France and then onto the Queen of France one day. It is determined that Maria Antonia’s teeth are not straight enough and she endures a horrible experience of getting braces put on her teeth, her hair isn’t right and it is redone which she is none to happy about since it’s really uncomfortable. Then there is the fact that she is none to smart but then she’s never really been too concerned about that and to be truthful, neither had her mother been. Now all of these things are of utmost importance and Maria Antonia’s mother is nothing if not very determined to have this union happen.

When Maria Antonia is finally deemed worthy enough to marry the Dauphin, it is done by proxy and later she journeys from her homeland of Austria to France. She is not allowed to take any personal things including none of the ladies who have waited on her from childhood or her beloved dog. So there she is in a foreign place that is so much different than her homeland. She’s young and frightened but the one bright spot is that the dauphine doesn’t seem all that bad towards her. They are finally married officially but unfortunately the marriage isn’t consummated. It seems the dauphin has not much interest in that area of things. As all know, as political alliances go, an heir is extremely important. Unfortunately the years pass and still the marriage isn’t consummated but something else happens and that is that both Marie Antoinette and Louis Auguste become friends and love each other.

Becoming Marie Antoinette is interesting on so many levels. It really shows us how hard the times were for young women who were from royal families back in the 1700’s. Their lives were just not their own and they were mainly used for political alliances and nothing more. I think that is so sad that these young girls were shipped off to foreign places and away from the lives they knew. Worse yet that at thirteen and fourteen years of age were expected to marry and consummate the union as well. Marie Antoinette grew up feeling that she was nothing but a disappointment to her mother and that continued on well into her marriage with Louis Auguste.

What I loved about Becoming Marie Antoinette was all the attention to detail; both historical and the court life. The descriptions of the gowns, jewels, food – everything is so vividly described that you feel as though you are right there experiencing it all. This novel is very well written and it captivates you from the very beginning. It’s a great start to the trilogy but it certainly leaves you feeling that you want more which of course is to come in the second book. I’ll definitely be watching for it!

I have one copy of Becoming Marie Antoinette by Juliet Grey up for grabs. To enter…

This giveaway is open to US and Canadian residents only (no PO boxes) and I will draw for the winner on Saturday, September 3 /11. Good luck everyone!

My copy of Marie Antoinette was received for review from TLC Book Tours and the Publisher.