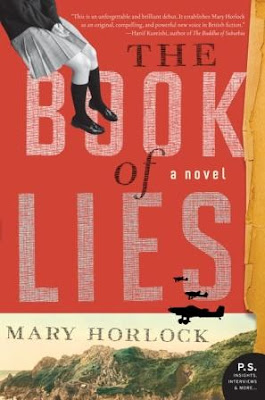 The Book of Lies is the debut novel of Mary Horlock. It’s an intriguing novel that links two stories – one from the past and one present. It sheds plenty of insight into a time past on the small island of Guernsey and how that history weaves back into the present time.

Is Cat Rozier a murderer? Well, she thinks so. Fifteen-year-old Cat is a smart gjrl but she’s also a fat and frumpy girl (her words) and this makes her not so very popular with her peers. But then Nicolette, who is very pretty and of course immediately popular, comes to town and befriends her. Cat is surprised of course but she’s certainly not going to turn down the chance to be friends with one of the most popular girls at school.

So begins Cat and Nicolette’s friendship. They become inseparable and do everything together. Cat had never been one for parties (of course she’d never been invited before either), but meeting Nic changes all that. Now life is about going out with Nic to parties and drinking way more than she should be and, of course, boys. Then things go awry and Nic gets the wrong idea about something that Cat has done and all of a sudden Cat becomes enemy number one. Instead of being her friend, Nic is now a big bully towards Cat and being nothing but cruel to her.

In the background of this story, another story is being told and that is of Cat’s Uncle Charlie, who had lived through the Nazi occupation of Guernsey and spent time in a concentration camp paying for his supposed sins. As his confession is related throughout the story, Cat relates it to her own life. You see her Uncle Charlie believes he murdered someone when he was young and Cat believes that she has murdered someone in the present. Cat also believes that history repeats itself. She believes that she was a murderer before she was even born due to the history of her family.

I did enjoy this book but I didn’t love it. I really liked the premise of the book and thought it sounded great. I guess for me, I found parts of it really drawn out. I did however like Cat as a character although a lot of her behavior wasn’t likable and you’re never really sure if she’s telling the truth about anything. However, I thought much of her behavior came from her family life and just how she felt about herself. I thought she was very real and her pain of being ‘out of place’ very real as well. Through her words and ultimately her actions you could feel her pain at being shunned by Nicolette.

I read The Book of Lies by Mary Horlock for her book tour with TLC Book Tours. Be sure to check more opinions on the book at the other tour stops for it. You can pick up your own copy of The Book of Lies here in the US and here in Canada.

My copy of The Book of Lies by Mary Horlock received for review from TLC Book Tours and Harper Perennial.