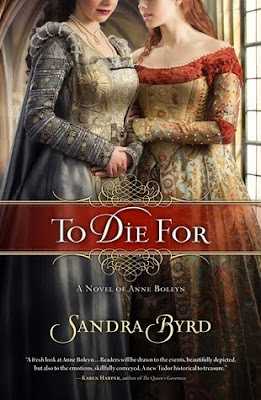 To Die For by Sandra Byrd is exactly why I love to read historical fiction – it’s the perfect blend of fact and fiction! First of all it’s about the Tudor period which I love and it’s about Anne Boleyn who happens to be one of my favorite historical characters. Add to that all the intrigue and back stabbing that you have going on in the court of Henry VIII and you have yourself an excellent novel!

This novel is told from the viewpoint of Meg Wyatt who was Anne’s best friend from the time they were young girls. Now normally I wouldn’t like to read a novel that should be exclusively about Anne Boleyn but ends up also being a lot about her best friend Meg but this novel is so well written and captivating that I was completely pulled into the story of the friendship between these two women. Also, it was not hard to like Meg. She was loyal, honest, and a true friend to Anne. I had not had the opportunity to learn much about her before this novel so this was really a treat.

As girls, Anne and Meg did almost everything together but when they got older Anne left for France and Meg stayed behind to care for her ailing mother while trying to stay out of the way of her cruel father. Eventually though Anne returns and of course catches the eye of Henry VIII. In the meantime Meg is married off but it’s to an elderly man who doesn’t last long enough to make a true wife out of Meg. Meg ends up at court being one of Anne’s ladies and she’s ok with that as the true love of her life, Will, is unavailable to her as he’s chosen the priesthood over her.

Soon enough Meg finds herself embroiled in Anne’s life of trying to get the King to marry her and get rid of his wife Katherine. Anne refuses to only be a mistress to Henry – she wants it all – to get the crown and be the Queen of England. Unfortunately for Anne as we all know she is unable to produce a son and heir and that brings her down quickly in the eyes of the King. While the King’s eye was always venturing towards a pretty girl, soon enough with his displeasure at Anne, things go further than only a venturing eye.

Rumors and such begin to fly and Anne finds herself no longer perfect in the King’s eye. Her life is unraveling quickly and the only solid thing she has is her friendship with Meg. Meg who is and has always been there for her. I wouldn’t say that Meg gave up her life for Anne because of course she couldn’t have Will but she did wonder often what would have happened to the two of them if they had married their childhood sweethearts instead of following Anne’s ambition of being Queen. Those familiar with Tudor history of course know the story doesn’t have a happy end for Anne Boleyn as Henry eventually has her beheaded. Meg stays loyal to her to the bitter end. As is always the case when it comes to the politics of court – when one person loses favor, the other goes along as well. While Meg is no longer welcome at court, thankfully her life does take a turn for the good at the end.

I know it seems that this story of Anne Boleyn and Henry VIII is told and retold. What could possibly be new about it? Well, the facts remain the same but it’s in the telling of the story that you get a fresh perspective of the characters. I loved learning about Meg and I liked seeing a different side of Anne Boleyn – the side that showed she too could be loyal… to her best friend Meg. The best thing is that To Die For is the first in a Tudor series that Sandra Byrd is writing and I for one can not wait for the next ones to come! 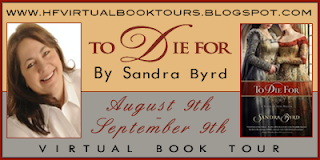 I just happen to have an extra copy of To Die For by Sandra Byrd that I’m going to give away and the best part is since it’s my copy it’s open internationally! To enter…

Again, this giveaway is open internationally! I will be drawing for the winner on Saturday, September 3/11. Good luck everyone!

My copy of To Die For by Sandra Byrd was received for review from Historical Fiction Virtual Book Tours and the Publisher.