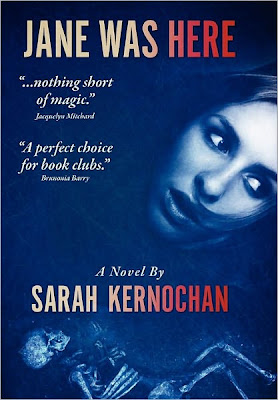 Good day everyone! I’m spotlighting a book for you today called Jane Was Here by Sarah Kernochan. I was to have a review for you today but something came up over the weekend and I didn’t get too far with my reading. However I’m about 50 or 60 pages in and I’m quite intrigued with this story and more than a little curious as to the direction it’s going to take. I hope to have my review for you this week. In the meantime I’m going to share a bit about the book with you today and be sure to pop by tomorrow for a guest post with Sarah along with a book giveaway!

About Jane Was Here by Sarah Kernochan

JANE WAS HERE is a suspense story which brings reincarnation, karma, and the paranormal into the mix. What if someone was born with a fragmentary memory of a life before, and refuses to adjust to their new identity? What if she is driven instead to find the rest of those memories so that she can know what happened to her 150 years ago when she mysteriously disappeared?

A young woman arrives in the small rundown community of Graynier, Massachusetts. She calls herself Jane, though she was christened by another name. She can point out the house where she grew up, and yet she has never been to Graynier in her life. Thus begins Jane’s mission, to retrieve the puzzle pieces of a former life, groping her way through the past and the present simultaneously.

The inhabitants of Graynier are unwittingly drawn into the mystery, as it becomes clear: someone must pay in the present for what happened in the past. For somewhere in this town is her killer, who also has come back incarnated as a different person.

Will Jane meet the same fate as she did in the other time? Or will divine justice be served?

Buy Jane Was Here at Amazon.com or Amazon.ca

Sarah Kernochan (born December 30, 1947) is a documentarian, film director, screenwriter and producer from the United States.

After graduating from Rosemary Hall in Connecticut, she dropped out of Sarah Lawrence College to take a job writing for The Village Voice. After quitting that job, she became interested in film and quickly gained national prominence in the United States as co-director and co-producer of the 1972 film Marjoe (about evangelist Marjoe Gortner), which won an Academy Award for Documentary Feature.

During the next two years, she released two albums on RCA Records as a singer-songwriter, House of Pain and Beat Around the Bush

In 1977 Kernochan’s novel Dry Hustle was published. It was reprinted as an ebook in 2010.

Kernochan’s first screen credit as a screenwriter came with the 1986 film 9 1/2 Weeks.

By the time she was brought in to work on the 1993 film Sommersby with Jodie Foster she had become known for creating strong female characters. She commented in an interview with Salon.com, “I think people know that there’s no point in calling me in if you want the other kind of women characters: a featureless “help me” character, or the saint, the whore – you know, any of the skin-deep stereotypes. I don’t think all women are powerful, intelligent, any of those things. I just require that female characters be very real, that they have all the dimensions that the male characters do.”

Since then, she has been primarily a screenwriter. She –

· wrote and directed The Hairy Bird

Her second documentary, Thoth, also won an Academy Award in 2002,

Jane Was Here on Goodreads

Hope everyone enjoyed this book spotlight! Be sure to stop by tomorrow for Sarah’s guest post as well as a giveaway!