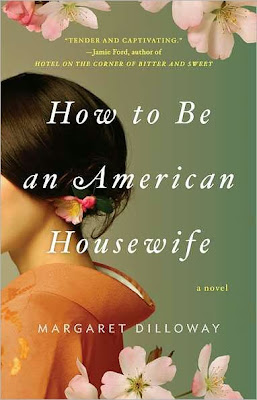 I’m thrilled to welcome Margaret Dilloway, author of How to Be an American Housewife, to Peeking Between the Pages today. I read How to Be an American Housewife last year (my review) and I really enjoyed it. I love novels that take me away to a different place and culture and that’s just what this novel does! Margaret is joining us today with a guest post about finding humor in a dark situation and writing the novel after her mother passed away and learning about her even after her death…

Maybe it’s the Irish side of me, but even when I write serious things, I can’t help but put some humor into it. It’s what my natural style is. If I try to write seriously, my editor chastises me, so I don’t even attempt to cut out that part of myself anymore.

Thus, although some heavy stuff goes down in the novel (bitter relationships, war, broken dreams) there’s a fair amount of humor in it, too.

For example, in the book, Shoko threatens to throw a plate of spaghetti at her new husband, who doesn’t appreciate the effort she’s gone to. I don’t know that my mother ever actually did that to my dad, but she did say it at least once, to us kids. I think it might have been on I LOVE LUCY or some other old TV show. Anyway, though at the time I didn’t think it was so funny, now the thought of a tiny Japanese woman threatening to start a food fight (something she clearly won’t do, given her cleaning habits) strikes me as humorous.

In another part of the book, Sue, the American daughter, comes to Shoko’s house for dinner. Sue is going to set the table when Shoko stops her, saying, “Wash hands first. Lotta good college did.” Which is, of course, a different way of saying bakatare, a testament to Shoko’s commitment to cleanliness, and a commentary on Shoko’s jealousy/pride of her daughter’s college education.

This humorous side of serious situations laces the novel. Discrimination is a pretty big theme in the book. I’d grown up hearing stories about the prejudice my family faced. My parents and my brother had been a trio, living all over the country while my father was in the Navy. My middle brother and I showed up late, at the end and after my dad’s military career, so we didn’t really experience what they did.

Rather than react with bitterness or anger to discrimination, my mother delighted in proving people wrong, like Shoko in the novel. Mom said people were surprised to learn she was actually civilized, not the savage they thought she would be. “I thought you’d have yellow skin! But it’s pink,” someone told her. People worried she’d serve raw fish at potlucks, so she made American food, better than any my friends had ever tasted. People used to openly gawk at my oldest brother. “Stick your tongue out at them,” she said she told him. This is the kind of spirit I gave to Shoko, this feeling that people only thought they hated Japanese because they didn’t know any better, and she was going to school them.
_________

Thank you for this terrific guest post Margaret! It sounds as though your mother had quite the admirable spirit. After reading this post, it makes me think even more of your novel which I had already really enjoyed!
__________

HOW TO BE AN AMERICAN HOUSEWIFE is about the strong pull of tradition, and the lure and cost of breaking free of tradition. Set in California and Japan, it tells the story of Shoko, a Japanese woman who married an American GI as a way of improving her and her family’s fortunes, moved with him to the States, and tried to learn how to be a proper American housewife; and her grown daughter Sue, who finds her own life as an American housewife is not at all what her mother would have wanted for her, or even what Sue had hoped for herself. When Shoko’s illness prevents her from making a long-awaited trip to Japan to be reunited with her brother, she asks Sue to go in her place, and the trip changes both women’s lives in unexpected ways. With beautifully delineated characters and unique entertaining glimpses into Japanese and American family life and aspirations, this is also a moving mother and daughter story. Interspersed with quotations from Shoko’s guide to being an American housewife, this is a warm and engaging novel full of surprising insight.

Margaret Dilloway was inspired by her Japanese mother’s experiences when she wrote this novel, and especially by a book her father had given to her mother called The American Way of Housekeeping. She lives in Hawaii with her husband and three young children.

I have one copy of How to Be an American Housewife by Margaret Dilloway up for grabs to US residents only. To enter…

This giveaway is open to US residents only (no PO Boxes as per the publisher) and I will draw for the winner on Saturday, August 27/11. Good luck everyone!