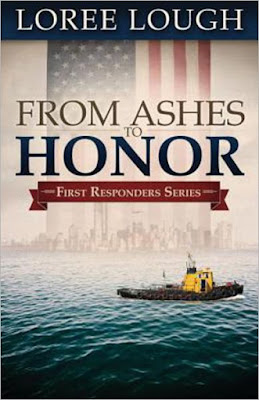 From Ashes to Honor by Loree Lough is a novel that takes us into the lives of people who have lived through the horrifying events of September 11, 2001 and shows us how this event this affected their lives at the time and how they coped over the years and eventually rebuilt their lives the best they could. This is a fictional tale but as you read you know how very likely it is that this could be very real.

Austin was a police officer a the time of 9/11 and one of the first responders. Even worse he loses his own twin brother to the attack. The events of that day never far from his mind Austin suffers debilitating nightmares and a deep rooted anger that seems to be be manifesting itself towards anything and everything in his life.

His therapist Mercy makes the decision to pull him from active duty for the safety of the public as well as his own safety. He’s a walking time bomb full of anger. Mercy though has her own issues from her past that she deals with and listening day in and day out to all the terrors that people have suffered due to the attack has left her emotionally drained and off balance herself.

This is why years later both Austin and Mercy find themselves in Maryland. Austin has begun a new career as an EMT and Mercy is a counselor in a high school. By chance they happen to meet again and sparks fly. Austin has never felt this way about a woman and the feeling seems mutual. They begin to see each other and they seem to be able to make it through almost anything except one very big issue. Austin is a firm believer in God while Mercy most definitely is not. Will they be able to make a go of it with such a big obstacle standing in the way.

This novel was quite good and it certainly kept my attention. It’s a bit of a romance as well and while I found some of the dialogue for that mushy I still appreciated the fact that it was a nice, romantic kind of love. The book really does raise an interesting question when it comes to faith though. Could you see yourself in a relationship with someone who didn’t have the same religious beliefs as you do? I really think a couple has to be pretty much on the same page with that unless of course neither pushes their beliefs on the other. For me though I think it’s important that we would both hold the same values and beliefs. For this reason and other topics throughout the book I think this would make an excellent book club choice!

I appreciated as well, especially at this time of the year when the events of 9/11 are fresh in our minds, the look into how individuals may have reacted and dealt with the events both internally and externally. My prayers will forever be with those that lost their lives on that fateful day and their families that have had to deal wit those losses daily and try to move on with their lives.

You can pick up a copy of Ashes to Honor by Loree Lough here in the US and here in Canada. It’s a quick and enjoyable novel worth a read and it’s the very first in a series called First Responders. I definitely enjoyed this one enough to pick up the next one!

My copy of Ashes to Honor by Loree Lough was received for review from the publisher.