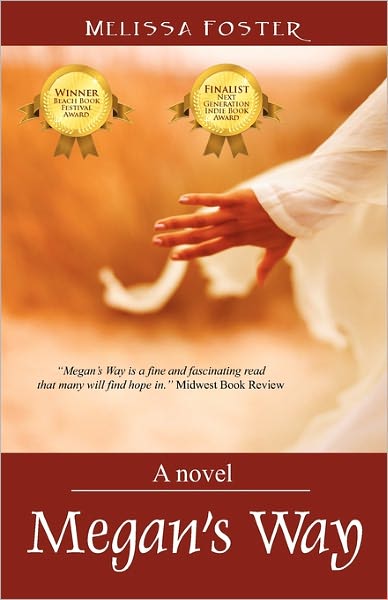 Megan’s Way by Melissa Foster is an emotional story – a rendering of a family drama.  It’s also the story of our friends and the often very complicated relationships we have with them.  Tangled in and among all of this is a multitude of long buried secrets – secrets that, if revealed, can destroy these friendships.

Megan is a single mother to Olivia and perfectly happy with her life except for the fact that her cancer has returned and the outlook isn’t good this time.  Megan and her daughter have always been extremely close.  Really Megan has devoted her life to Olivia and vice versa.  Since her mother had cancer the first time Olivia would much rather spend time with her mother than anywhere else.  More than anything Megan does not want her daughter to have to watch her deteriorate to nothing so she makes the decision to do nothing and leave the world ‘her way’.

This novel also has some elements of the paranormal in that Megan and Olivia share a very deep connection in that Megan can feel emotions or pain that Olivia is in.  I quite enjoyed that part of the story as I do believe that there are people in the world that share such connections. Megan’s main goal was to cause the least amount of pain and suffering to her daughter and her friends Holly, Jack, and Peter.  This is really a story of one woman’s courage to leave life on her own terms and I respect that.

I liked the characters in this novel although I can’t say I really felt any strong connection with them and even though in some ways this was a sad story, it really seemed to be hopeful as well in a strange kind of way.  I guess it shows us that life goes on even when in our darkest moments we believe it can’t.  As Olivia says at one point in the story that the sun still comes up and the day still goes on even though her mother is gone.  Even though I didn’t form any connection to the characters it absolutely didn’t take away from me liking this story which sounds odd I know, but still true.  I guess in some ways I would have to say I liked Megan the most because, like her, I wouldn’t want to put my loved ones through any more suffering than I had to.

That being said I think this book would make a great book club selection.  What would you do for those you love?  What decisions would you make?  I constantly questioned myself throughout this book – what would I do?  Ultimately I feel I would follow Megan’s path.  Then there is the other side of the story that involves all the secrets that have gone on between the friends.  They have all kept their secrets buried but with the death of Megan they begin to question themselves and their decisions.

I really enjoyed Megan’s Way by Melissa Foster.  I finished it quite quickly as once I got started I needed to get to the end to learn just what everyone’s secrets were.  I have to say I was actually surprised by at least one of the secrets harbored by one of the friends.  I just didn’t see it coming.  All in all this was a good read for me.

Be sure to pop by tomorrow as Melissa will be joining us with a guest post!

My copy of Megan’s Way by Melissa Foster was received for review from the author.