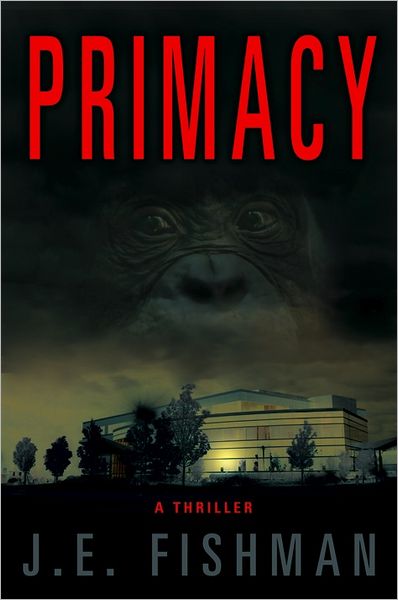 Good Saturday morning everyone!  As you can see I’ve got my new blog design up and running but I’ll write more about that tomorrow, other than to say I love it!  Today is about spotlighting a book called Primacy by J.E. Fishman and featuring an interview with him!  This sounds like a really good thriller and I only wish there were more of me so I could manage to read more books!  I hope you enjoy this great interview with J.E. Fishman…

1. What inspired you to write Primacy?

One way to come up with a dramatic premise is to contemplate a slightly different reality by asking, “What if…” What if an ambitious associate went to work for a law firm that turned out to be owned by the mob: The Firm. What if scientists tried to clone a dinosaur: Jurassic Park. What if a king decided to divide his holdings among his children but one of them said no: King Lear. I was driving in the car one day and asked myself: What if the first ape to mutate for speech showed up in an animal testing laboratory of all places?

2. Your new novel deals with the sensitive issue of animal rights. You say you’re not an animal rights activist, but where do you stand on the issue?

I think we humans need to be more conscious of our impact on other animals. One day we may look back at how we treated animals in this period and be appalled, the way we are appalled today about having once allowed slavery and denied women equal rights. Peter Singer, the philosopher who wrote Animal Liberation, argues that once we acknowledge that other species have interests and the ability to suffer, then we have a moral obligation to stop imposing that suffering on them. While we might debate whether the world is as black and white as Peter Singer argues, there’s no question that we can do better in our treatment of other species. Both factory farming and the animal-testing infrastructure seem like a good place to start. My book, obviously, is about the latter.

3. In your story, Primacy, all hell breaks loose when it’s discovered that twin bonobos at an animal research lab appear to have acquired the power of speech. How possible is it for animals to gain the ability to speak a human language?

There are two factors. One is the physical ability to form words as we’d understand them. The other is the mental ability to employ syntax. Obviously parrots can speak words that we understand, for example. There have been some famous ones, like Alex, that seem to know hundreds of words and use them to express their desires, but I guess they can’t string them together into complex sentences. Apes have been taught sign language, but as for speaking they are said to have a voice box too high up in the neck to form words. In Primacy the bonobos have had multiple mutations: in the location of the larynx and in the language region of the brain. How possible is that? Well, we have a common ancestor, which means we humans didn’t start out talking, either.

4. The issue of what should happen to the surviving talking ape consumes your book. What do you think would happen in the real world if a talking ape was discovered?

I suppose a lot depends upon where that ape is discovered. By putting this one in an animal testing lab, I’m sketching out the moral dilemma in bold face. I fear that if a talking ape showed up somewhere less explosive it would be treated as a novelty, a freak of nature. The point that the heroine, Liane, makes in Primacy is that the interests of the individual should be paramount. Humans can be so callous even to fellow humans, so I wouldn’t necessarily expect some poor talking ape’s individuality to triumph over its novelty for us. On a philosophical level, however, it might force us to recalibrate the primacy of humans in nature.

5. Primacy’s secondary story revolves around a budding romance between the heroine, Liane, and her neighbor and now accomplice on the lam, Mickey. Do they have an animal attraction?

Ha! Some might call that question speciesist! By “animal attraction” we usually mean something that is not rational, but why are we pinning that on animals? Humans generally form their conclusions emotionally, instinctively, and then find a way to rationalize them. Just because we have the capacity to reason doesn’t mean we use if for everything. Fortunately, love remains largely outside the rational paradigm. Mickey essentially falls in love with Liane on sight. He’s a romantic.

6. Many works of fiction have explored talking animals – Planet of the Apes, Dr. Doolittle, Animal Farm, to name a few. How does your book contribute to the dialogue?

Animal Farm is essentially a parable. I wouldn’t count that. Dr. Doolittle to some extent does call attention to the dignity of other creatures. Planet of the Apes reminds us that our own primacy is something of an evolutionary accident, one that we squandered (in that story) by allowing a nuclear holocaust. Primacy emphasizes that our own humanity imposes obligations to other species that we need to take more seriously.

7. You write of the bonobo, an endangered species. What can be done to protect it?

Their range is very small in the wild. The only thing we can really do is to protect their habitat in The Congo. There are conservation organizations working on this, such as Friends of Bonobos, the Jane Goodall Institute, World Wildlife Fund, Bonobo Conservation Initiative, and others.

8. Some of your characters are driven by greed and power lust. What drives some people to kill, steal, cheat, and lie – and to trample innocent life?

If anyone figured out how to answer that question in two hundred words or less we wouldn’t need novels anymore.

9. But your heroine, Liane, exemplifies a different side of humanity. She changed her mind about animal research labs and stopped working for one. She then stole a talking bonobo. What should she have done for the bonobo?

She never should have gone to work at the lab, but she realizes that too late. Once she’s there, she faces a moral dilemma. Moral dilemmas don’t have easy answers. The decisions Liane makes reveal her true character. She believes in the primacy of the individual, in acting to protect that individual against a social construct that looks at that individual as a means to a supposedly greater end.

10. Part of the story takes place in the Congo, where poverty and animal rights abuses seem to go hand in hand. What can be done to clean up this mess?

I’m not an expert on The Congo. It does seem that in places where people treat one another badly, they treat animals even worse. But for all that I’m sure there are many Congolese fighting to protect the animals. Years ago, on a trip to Zimbabwe, I saw people risking their lives to stop poachers, for instance. As humans, we always have a choice in our own behavior.

Debut fiction author J. E. Fishman has crafted a thrilling new novel, Primacy, that takes readers from New York City’s scenic Central Park to the jungles of The Congo River and thrusts them into one of the biggest debates of our time: How should humans treat animals?

In the fast-paced story researcher Liane Vinson thinks she can handle her big promotion to the primate lab at the world’s most secretive animal testing facility in Farmingdale, Long Island. Going along to get along, she’ll ignore both the vitriol of animal rights protestors outside Pentalon’s gates and the cold calculus her bosses use to distance themselves from their subjects.

But then one of her favorite animals, a bonobo she calls Bea, shocks Liane by demonstrating the ability to speak. To rescue Bea from the knife, Liane must shed her complacency and challenge CEO Axel Flickinger, who holds the power of life and death at Pentalon. Will Liane continue to follow the rules, sacrificing individual creatures to the supposedly greater good?

Imperiling her own life and that of her friend, veterinarian Mickey Ferrone, Liane turns renegade, eventually traveling from New York to Kinshasa in an effort to save a creature so unique that its very existence endangers an entire industry. Worse still, as Liane learns, this little ape threatens humans’ own primacy in nature.

“While it is difficult to know exactly how many animals will be experimented on in animal research labs this year,” notes Fishman, “estimates range as high as 150 million vertebrates worldwide. In the United States, most of this activity occurs behind high fences and locked doors. As a storyteller, my job isn’t to draw absolute conclusions about this activity but rather to sketch out the questions we should be asking ourselves as a society. While some progress has been made over the years with regard to animal welfare in testing labs, of late we seem too inclined simply to avert our eyes. If Primacy forces those closed doors open a crack, forces us to look inside, it will have accomplished something beyond entertainment.”

Buy Primacy at Amazon.com or Amazon.ca 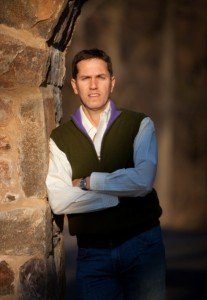 J. E. Fishman is the author of a new thriller, Primacy, which explores the significant themes of animal rights, the plight of endangered bonobos, and the welfare of animals in research labs.

Fishman’s literary background includes serving five years as a book editor at Doubleday, where he edited the works of NFL superstars Jim Kelly and Ronnie Lott. He founded The Bedford Book Works Literary Agency (later sold to Dystel & Goderich Literary Management), where he represented dozens of writers and personalities, including Starbucks CEO Howard Schultz and Kweisi Mfume, then head of the NAACP. He was founder and CEO of subrights.com, which closed its doors in the dot-com crash. Early in his career, Fishman served as an associate editor at U.S. Business Press. He has also ghost written and edited a number of books.

He co-authored two non-fiction books, All I Need to Know I Learned From My Horse (Doubleday) and Life is a Series of Presentations (Simon & Schuster).

He published a mystery novel through online serialization, Cadaver Blues, on The Nervous Breakdown, a literary Website where he now contributes a weekly column.

Fishman, 49, a lifelong nature supporter, is a former trustee of the Eastern New York Chapter of The Nature Conservancy and the North Salem Open Land Foundation.

When he’s not writing books, he serves as the managing partner of Second Fiddle Enterprises, LLC, a real estate holding company. He’s also an advisor to the CEO of Acorn Energy (NASDAQ: ACFN).

An animal lover, he owns two horses, two dogs, a cat and a pond full of fish. He resides with his wife and daughter in Chadds Ford, Pennsylvania.

I have one copy of Primacy by J.E. Fishman to share with my readers.  To enter…

This giveaway is open to US & Canadian residents (no PO boxes) and I will draw for the winner on Saturday, October 8/11.  Good luck everyone!