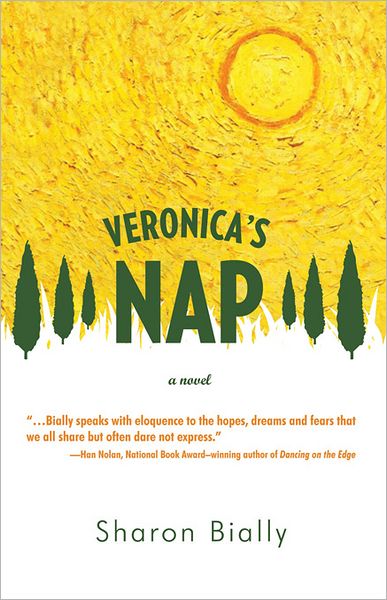 Veronica’s Nap by Sharon Bially is a fantastic read!  I’ve been struggling with my reading lately as most of you know and this was the book to pull me out of it.  I breezed through this book in one day and I can only hope my next read is as good as this one.  Veronica’s Nap takes us from New Jersey to France and then back again with a woman who seems to have everything yet is unable to find herself and what really makes her happy amid the chaos of family life.

Veronica has it all or so it seems.  On a vacation to the south of France she meets and marries the man of her dreams and goes on to have twins.  Not only does she live in an idyllic setting but her husband Didier makes sure that she has a great studio set up and a nanny who watches the twins  so she can achieve her dreams of being a painter.  The only problem is that Veronica has lost her ambition to paint and instead spends her days doing piddly jobs around the house and taking her normal two hour naps in the afternoon.

Of course this sounds fantastic but it’s not.  Veronica’s husband Didier is becoming very tired and frustrated of coming home and finding that, yet again, his wife hasn’t even attempted to paint that day.  When they met he fell in love with a woman who had dreams, was an artist, and was excited to help him pursue his dreams as well.  This woman seems to have disappeared on him and as the days pass their relationship becomes even more rocky until it explodes and has Veronica running home to mommy and daddy in New Jersey. It is there that she begins the journey back to finding out just who Veronica is and what she wants out of her life.

Veronica is a great character and one that I think so many women will relate to.  Many women struggle to figure out who they are and where they fit amid the craziness of trying to balance family life with a fulfilling job.  The author also does a wonderful job of describing Provence making you feel as though you are there and walking through the countryside.  I also enjoyed the portrayal of how cultural differences affect a relationship as Veronica is American and Didier is a Shephardic Jewish man.  I really enjoyed this novel and wouldn’t hesitate to recommend it.

I read Veronica’s Nap by Sharon Bially for her book tour with Pump Up Your Book and you can also check out what others on the tour thought of the novel here.  Be sure to visit Sharon on her website and you can find her on Facebook and Twitter as well.  You can pick up your own copy of Veronica’s Nap here in the US and here in Canada.

My copy of Veronica’s Nap was received for review from Pump Up Your Book and the Author.