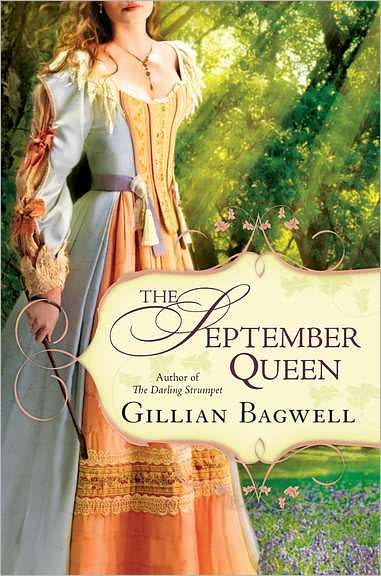 I’m pleased to welcome Gillian Bagwell, author of The September Queen releasing November 1, 2011, to Peeking Between the Pages once again.  I just love this cover.  I don’t know why but I love the dresses of the olden times.  I wouldn’t have liked wearing them but they were so pretty.  I haven’t had a chance to read The September Queen yet but watch for my review come late November or December.  I’m really looking forward to it because it sounds fantastic.  Today Gillian joins us to talk about Jane Lane and the Royal Miracle…

During the course of my research for The Darling Strumpet, my novel about Nell Gwynn, I learned about an episode in the life of Charles II long before Nell Gwynn came into his life – his six-week odyssey trying to escape from England after his defeat by Cromwell at the Battle of Worcester on September 3, 1651. One of the most intriguing aspects of the story was that an ordinary English girl named Jane Lane had risked her life to help Charles and protect the future of the monarchy. She was famous for a short time after Charles was restored to the throne, but amazingly, her story has never been told in fiction before.

Charles’s father, Charles I, was executed in 1649, and the young Charles was in exile, bouncing between France, Holland, and Jersey, one of the Channel Islands off the coast of France. When Scotland offered an army to help him take back his throne, he readily agreed, and he marched across the border into England in late August. But he was already outnumbered, and by the time he and his exhausted troops limped into Worcester, he had lost many men to desertion, and failed to gain as many English supporters as he had hoped.

The 21-year-old Charles began the morning of September 3 atop Worcester Cathedral, surveying the landscape and Cromwell’s troops approaching from the south. He and his supporters knew that all their hopes rested on that day, and Charles thought that for him, the outcome would be “a crown or a coffin.” 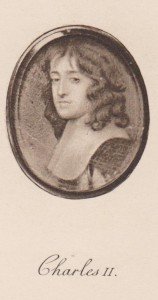 Their bloody rout by the Roundheads ended the Royalist cause. Once Charles had been convinced that the best he could do was survive, he fled as his supporters made a last ferocious stand, and legendarily dashed out the back door of his lodgings as the enemy entered at the front, slipping out the last unguarded city gate.

From that disastrous night until he finally sailed for France from Shoreham near Brighton on October 15, he was on the run, sheltered and aided by dozens of people – mostly simple country folks and very minor gentry – who not only could have earned the enormous reward of £1000 offered for his capture, but risked their lives to help the fugitive king, who had been proclaimed a traitor. 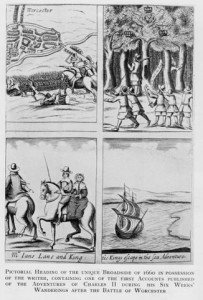 One of Charles’s companions during his flight from Worcester on September 3 was the Earl of Derby, who had recently been sheltered at a house called Boscobel in Shropshire. He suggested that the king might hide there until he could find a way out of England.

Jane Lane, a young woman of about 25 years old, lived at Bentley Hall in Staffordshire, not far from Boscobel. She became involved in the king’s flight because she had a pass allowing her and a manservant to travel the hundred miles to visit a friend near Bristol – a major port where the king might board a ship. Her brother, Colonel John Lane, had served under Charles’s companion Lord Wilmot, who was with him and trying desperately to get him to safety. 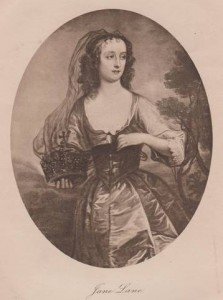 In a story that sounds like something out of fiction, Charles disguised himself as Jane’s servant, and Jane rode pillion (sitting sidesaddle behind him while he rode astride) along roads traveled by cavalry patrols searching for Charles, through villages where the proclamation describing him and offering a reward for his capture was posted, and among hundreds of people who, if they recognized him, had every reason to turn him in and none – but loyalty to the outlawed monarchy – to help him.

It was an improbable scheme. Charles was six feet two inches tall and very dark complexioned, not at all common looking for an Englishman of that time. And yet time after time he rode right under the noses of Roundhead soldiers without being recognized. He narrowly eluded discovery and capture so many times that the whole event eventually became known as the Royal Miracle.

He was in grave danger of capture and death throughout his 600-mile journey (which can be recreated by following the Monarch’s Way footpath), but the experience was strongly formative. After his restoration to the throne he told the story frequently for the rest of his life, and the hardships he endured gave him an understanding of the common people such as no other king had had.

Gillian Bagwell’s novel about Jane Lane, The September Queen, will be released on November 1. Please visit her website, www.gillianbagwell.com, to read more about her books and read her blog Jane Lane and the Royal Miracle www.theroyalmiracle.blogspot.com, which recounts her research adventures and the daily episodes in Charles’s escape after Worcester.

Thank you so much for joining us today with this wonderful guest post Gillian!  I’m really looking forward to reading your newest novel later this month.  It’s been a pleasure having you here today.

About The September Queen

Jane Lane is of marrying age, but she longs for adventure. She has pushed every potential suitor away-even those who could provide everything for her. Then one day, adventure makes its way to her doorstep, and with it, mortal danger. Royalists fighting to restore the crown to King Charles II implore Jane and her family for help. They have been hiding the king, but Cromwell’s army is on his scent. Jane must transport him to safety, disguised as her manservant. As she places herself in harm’s way, with peril awaiting at every turn, she finds herself falling in love with the gallant young Charles. And despite his reputation as a breaker of hearts, Jane finds herself surrendering to a passion that will change her life forever.

Buy The September  Queen at Amazon.com or Amazon.ca 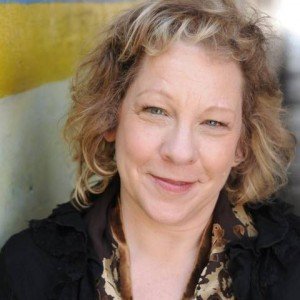 Gillian Bagwell grew up in Berkeley, California, and began her professional life as an actress, studying at the University of California Berkeley and the Drama Studio London at Berkeley before relocating to Los Angeles to pursue a career in film and television. She moved into directing and producing theatre, founding The Pasadena Shakespeare Company, where she served as artistic director for nine years, producing thirty-seven critically acclaimed productions.

She united her life-long love of books, British history, and theatre in writing her first novel, The Darling Strumpet, based on the life of Nell Gwynn. Her second novel, The September Queen, is the first fictional account of the perilous and romantic odyssey of Jane Lane, an ordinary English girl who risked her life to help the young Charles II escape after the disastrous Battle of Worcester in 1651 by disguising him as her servant. Gillian recently returned to Berkeley and is at work on her third novel, about the formidable four-times widowed Tudor dynast Bess of Hardwick.

I have one copy of The September Queen by Gillian Bagwell to share with my readers.  To enter…

This giveaway is open to US and Canadian residents only (no PO boxes) and I will draw for the winner on Saturday, November 19/11.  Good luck!