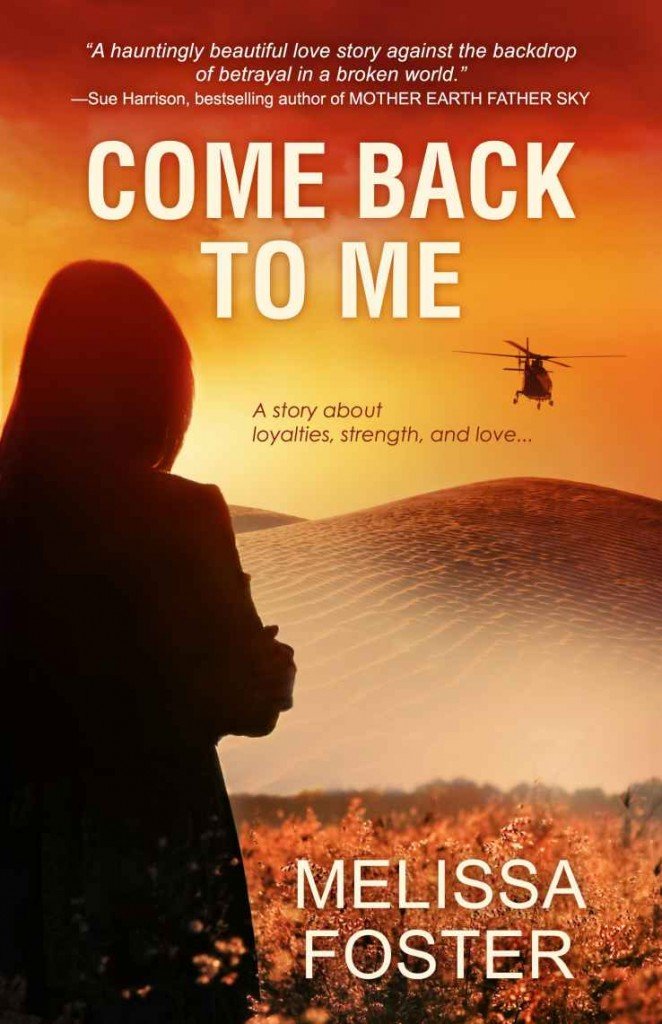 Come Back to Me is Melissa Foster’s latest novel and I will say right off that I loved it! I read Megan’s Way recently and really enjoyed it but I was literally blown away by this one. The story from beginning to end was one that left me feeling emotionally spent but in a good way. It is quite simply a beautiful love story of two people with an amazing connection and one that will stick in my mind and heart for a good long while.

Tess and Beau are a great couple; they have one of those relationships that people envy. Tess runs a successful business and loves her work. Beau is a photographer and at the opening of the novel has gone to war torn Iraq on a photo shoot that could mark the big break in his career that he’s been looking for. Because of this Tess keeps a secret from Beau; something that could change their lives – she’s pregnant. She’ll tell him but not now; she can’t ruin this chance for him. The only thing she doesn’t plan on is his helicopter crashing and him being dead.

All is not as it seems though and Beau has escaped death but just barely. He’s being kept alive in the desert by two Iraqi women who have escaped honor killings. Suha is a doctor and Samira a widow with three children. As Beau drifts in and out of consciousness he holds on to a picture of Tess and a pocket watch that she gave him before he left that has Come Back to Me engraved on it. This, more than anything, is what gives him the will to live. As Beau regains his strength he finds himself becoming more and more attached to these women and children who have become such a big part of his life but his heart remains with Tess.

Back at home Tess struggles with accepting that Beau is gone. In her mind he can’t be gone because he promised that he would come back to her and also because she just doesn’t feel in her heart that he is dead. She feels quite sure she would know it. Everyone around her keeps encouraging her to move on and rebuild her life but she just can’t – not without Beau. Even when she meets someone who could give her and her baby a good life she can’t open herself up enough to let it happen. She still feels that Beau is coming back.

As the story moves forward Beau is making it out of Iraq with the women and Tess is trying hard to rebuild her life. The novel moves back and forth between Iraq with Beau and back at home with Tess. Through each part we learn more about the characters and their deep love and determination to somehow be together again. All along there are twists and turns in the plot but none bigger than the one towards the end that will shock you and grab at your heartstrings and not let go.

Come Back to Me is such a powerful novel. It is full of rich characters living real lives. As you read you put yourself in their place and feel their hopes, dreams, and unfortunately their pain. You come away feeling as though they are your friends and you’ve shared in their lives for a while and when you turn the last page of the book and have to say goodbye you feel sad. While I may have expected or even wished for a different ending, this book is so well worth reading. When a book leaves me with my emotions running over like Come Back to Me did, it is always a book I will recommend to my friends!

You can find Melissa on her website, blog, Facebook, Twitter, and Goodreads.  You can buy your own copy of Come Back to Me by Melissa Foster here in the US.  Be sure to pop back over to Peeking Between the Pages next Thursday when Melissa will be here with a guest post and a giveaway of her book!