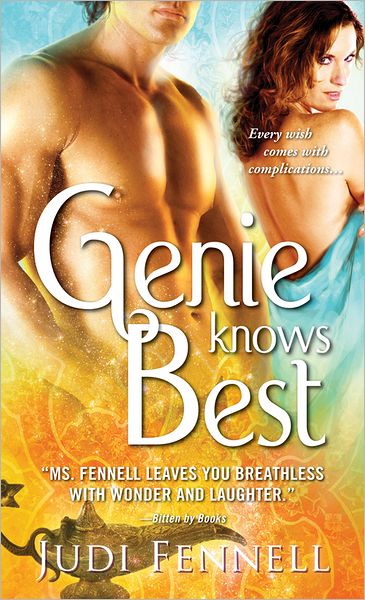 Genie Knows Best by Judi Fennell is another fun ride full of magic and the chaos that only a world full of mythological creatures could manage to bring about. I became a fan of Judi’s with her Mer series and it has just continued with her Bottled Magic series. Her novels are fun and provide the perfect escape from your everyday life!

Samantha’s father has passed away and she’s having a celebration of his life as that is what he wanted. She’s on her way to greet the guests when she overhears her fiance talking on the phone. What he’s saying is none to good either. While she thought he loved her, he actually was turning out to be the biggest jerk in the world after only her money. Would anyone ever just love her for who she was, not what she could do for them? She heads to her father’s study and takes a look in his safe which brings her the biggest surprise of her life – a real life genie in a bottle!

Even better the genie has a name – Kal and, in short, Kal is absolutely gorgeous. Turns out that her father had been Kal’s master and now she is. Samantha is stunned by this. Her father had certainly never mentioned having a genie but it does explain his success. Kal whisks Samantha off to the magical world of Izaaz where everything she sees defies anything she’s ever believed in. This is a world full of gnomes, dragons, centaurs, leprechauns, and many other mythical creatures. To top things off it seems her ex-fiance came across some other magical items in the safe and is going to use them to his best advantage. What else could possibly go wrong? —Much, much more!

Of course the sparks are flying between Samantha and Kal. Kal has harbored a crush on Samantha for many years as her father would always tell Kal about her, not to mention that he would watch her through the windows of his genie lamp. That attraction has not grown any less after being able to see her in the flesh. As for Samantha she can’t help but be attracted to this man. He’s gorgeous, nice to her, and he grants wishes. What could be better? However Samantha also holds the power to release Kal from his years of service and when she overhears this she automatically believes that Kal was also using her. He was no different than any other man in her life. So, does the gorgeous and magic wielding Kal and the mere mortal Samantha get together – well you have to read the book to find out!

I really enjoyed Genie Knows Best. I did find the beginning somewhat confusing with all the mythical creatures coming out of the woodwork but as the story got going it became much easier to figure out what was going on. While I Dream of Genies, the first in the series, is still my favorite, Genie Knows Best was a lot of fun too and a great way to spend a few hours! I’m really looking forward to the last one in the trilogy called Magic Gone Wild.  Judi Fennell never disappoints me with the wonderful and imaginative worlds she creates!

Be sure to pop in and visit Judi’s website where you can learn about her other books and you can also find her on Facebook, Twitter, and Goodreads. Your own copy of Genie Knows Best can be purchased at Amazon US or Amazon Canada. Make sure and stop by tomorrow as I have an interview for you all that I did with Judi.

My copy of Genie Knows Best by Judi Fennell was received for review from Sourcebooks.