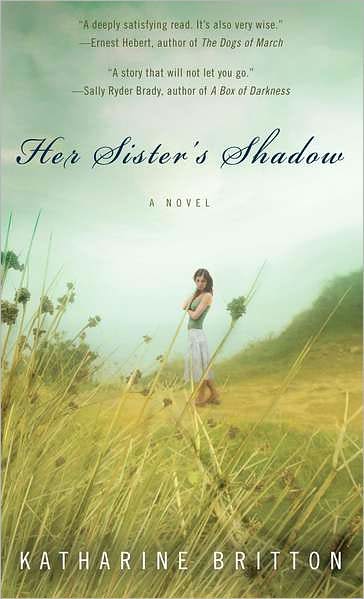 Her Sister’s Shadow by Katharine Britton is a story full of long buried family secrets and rivalry. The story alternates between the past from the years of 1966 to 1969 to the present year of 2009. Going back and forth offers us a view into how this family became so disconnected with each other and maybe a way in which they could possibly come together again.

The novel opens when Lilli receives a call from her older sister Bea. They have been estranged for nearly forty years only briefly talking once or twice a year. Bea calls with news that stuns Lilli; Bea’s husband Randall has passed away suddenly and she wants Lilli to come home for the funeral. Lilli is torn as she vowed never to return to her childhood home but at the same time she thinks that this may be an opportunity for her and her sister Bea to clear the air between them. She hopes to bring the past to light and then bury it once and for all. However Lilli is stunned when she sees Bea. Her once vibrant sister is aging and not in a good way. She has difficulty walking and doesn’t appear to be able to see too well. The house and surrounding yard are in complete disarray.

Lilli thinks back to her childhood when a family tragedy caused their mother to distance herself from the family. It was Bea that took over caring for Lilli and her sister Dori while their other sister Charlotte was the one that took care of the cooking and keeping of the house. Yet for Lilli she viewed all that Bea did as Bea’s way of showing how much better than Lilli she was. Lilli spent her childhood always feeling as though she was living in her sister’s shadow and it was one that she couldn’t find her way out of. Eventually the anger and resentment between the sisters is enough that Lilli simply leaves and never looks back – not until nearly forty years later when Bea’s call comes and changes everything for all of them.

Her Sister’s Shadow is a fantastic debut novel by Katharine Britton. It certainly had a captive audience in me. It was funny because I actually felt connected to all the characters which doesn’t usually happen but I felt drawn to each of the sisters for different reasons. As you read through the pages you realize how easy it is for misunderstandings to spiral out of control and even more how a family who doesn’t share their thoughts or feelings and buries them instead ends up losing what is most valuable and that’s the love of family. I really enjoyed this novel. It had everything I like in a book – emotions, family drama, and buried secrets. I think it would make a fantastic book club selection as there is so much to discuss. I look forward to more of Katharine Britton’s work in the future.

I have one copy of Her Sister’s Shadow by Katharine Britton up for grabs. To enter…

This giveaway is open to US and Canadian residents only (no PO boxes) and I will draw for the winner on Saturday, December 3/11.  Good luck everyone!

My copy of Her Sister’s Shadow by Katharine Britton was received for review from TLC Book Tours and the Publisher. I was in no way compensated for this review.