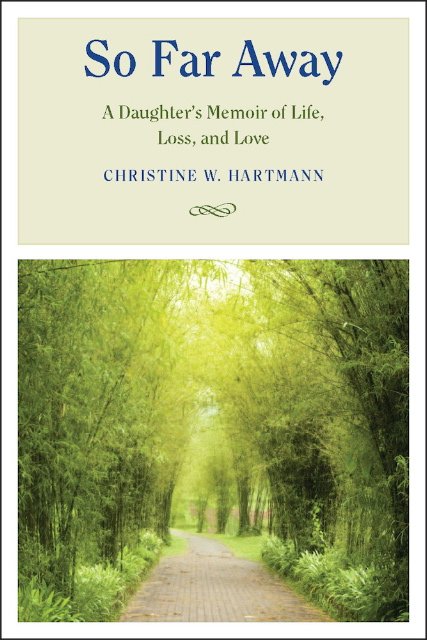 So Far Away is a memoir by Christine W. Hartmann in which she takes us into a very personal time in her life and the effects that it had on her. The novel chronicles the lives of her parents from their early years to the time when each chooses a different path to take towards the end of their lives. It is a very compelling and emotional novel that had me angry at times and crying at others.

Christine’s mother feels the need to control everything which is why she decides early on in her life that she is going to take her own life at seventy years of age regardless of whether she’s sick or not. She is not leaving it up to fate. She does not want to be a burden to her family if and when she gets sick and unable to care for herself. Now she should have kept this information to herself but she doesn’t. Twenty years before the event is even to occur she tells her daughter Christine. From that point on Christine lives with this awful knowledge and it hurts her in ways we can’t even imagine. At first Christine really tries to change her mother’s mind but eventually because she doesn’t want to be shut out of her mother’s life she accepts the decision the best she can.

Christine’s parents had divorced when she and her brother were young and the kids stayed with their father. Christine’s father was the opposite of her mother. He let life take its course and really was one who valued his independence. He lived on his own and still worked and while he had his name on a list for a retirement home, he was in no way ready to go. Unfortunately for him though the decision was taken out of his hands when he suffered several major strokes.

For Christine her mother’s decision really had a profound effect on her. She already lived with feelings of abandonment where her mother was concerned from her leaving her children after the divorce. Yes she still saw her kids and loved them but she still left. With the decision to take her life she was again taking herself away from her daughter and, even more, disregarding her daughter’s thoughts and feelings on the subject. During the years leading up to the event Christine and her mother spent a lot of time together and became very close in so many ways. Sadly, this did not change her mother’s decision to take her own life. As for Christine’s father, after his strokes the tables turned and Christine became the caregiver. Her father had always been good to her and she loved him dearly but seeing him so changed by the strokes and having to care for him in ways she never imagined also took its toll on her.

I experienced a multitude of emotions reading this novel. I was extremely angry at Christine’s mother because I can’t imagine a mother putting her child through something like that and I can’t imagine having to live with that kind of knowledge for so many years. I think it was so selfish and Christine has been very brave in sharing such an intimate memoir and I sincerely hope that it has helped her to heal. I think I felt so strongly about this memoir because my own parents are now in their seventies and I see so many changes happening in them and most are not good. I often wonder now just when I’ll be put in the position of having to care for them and make life changing decisions for them that I’d probably rather not have to make. It’s a scary prospect and throughout Christine’s novel I could feel how all that had happened was so incredibly emotional for her to the point where she suffered from severe depression. So Far Away is really worth reading not only for those who enjoy intimate memoirs but also for those with parents who are aging. Be prepared with a box of Kleenex though.

I read So Far Away by Christine W. Hartmann for her book tour with TLC Book Tours. Be sure to follow along with the other tour stops to see what they thought of the novel. You can visit Christine at her website and also read an essay she did at The Daily Beast here. Your own copy of So Far Away can be purchased here in the US and here in Canada.

I have one copy of So Far Away by Christine W. Hartmann up for giveaway. To enter…

This giveaway is open to US and Canadian residents only (no PO boxes) and I will draw for the winner on Saturday, December 10/11.  Good luck everyone!

Source: Review copy provided by TLC Book Tours and the Publisher. I received no compensation for this review.